10 things to come from Hong Kong 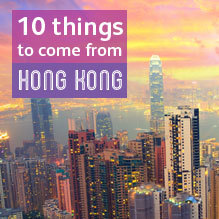 Best things to come out of Hong Kong

Hong Kong; somewhere we’ve all heard of and somewhere most of us probably want to visit. But aside from the fabulous food and the stunning skyline, just what has the world been given from Hong Kong.
Here are our top 10 things to come from Hong Kong.

Tsingtao Beer
Everyone loves a beer and tasting what the world has to offer is great, especially when we’re lucky enough to get it close to home. There are wide selections of craft beers made by the Hong Kong based Tsingtao Brewery Company that are exported all across the globe, including the UK.
Pineapple Bread
Now we’ve all heard, probably tasted and most likely loved banana bread. But in Hong Kong they go one better with everyone’s favourite citrus fruit, pineapple. This sweet bread can be found in most bakeries in Hong Kong, and although the traditional kind doesn’t actually contain pineapple, that shouldn’t stop you baking some at home.

Fish Balls
Fish and chip is something the British have been devouring for as long as anyone can remember. So why not try fish balls? These are particularly popular in Hong Kong, and come in two versions; the larger sized white fish balls that contain only fish and the yellow street food fish balls, which are boiled in a spicy curry sauce. If you aren’t in Hong Kong, we’re sure you can find a recipe for making your own.

Bamboo Scaffolding
Now this is really interesting; whilst the majority of the world relies on the sturdiness of steel scaffolding, many in Hong Kong prefer a somewhat less traditional method. Bamboo scaffolding began its life in the 1800s in Hong Kong, and has been used in a number of other areas across the globe, and was even used in the construction of famous landmarks such as the Great Wall of China.

Air Conditioned Walkways
Ok so these haven’t actually caught on we’ll admit, but we can only imagine that someone, somewhere is already mapping out plans for walkways across the globe. When you’re in Hong Kong you can get almost anywhere in the Central Business District via the interconnected walkway system, which is air-conditioned and provides a less stuffy alternative than street level – there’s also no rain or smog. Roll on air-conditioned walkways we say.

OLED
You know how you love your smartphone, television, tablet and just about every another other forms of electronic, interactive device? Well you can thank Hong Kong for that. OLEDs, which are found in the digital displays of electronic devices and emit lights, were first put into use buy Ching W. Tang in Hong Kong.

Film Sets
We don’t mean the actual sound stages, but there are a lot of big Hollywood films that owe the backdrop of Hong Kong’s stunning skyline, to some of their most famous film scenes. Christopher Nolan’s The Dark Knight filmed scenes at the International Finance Centre and the 2002 James Bond film Die Another Day featured scenes of the spy jumping into the waters of Victoria Harbour, after receiving the ‘kiss of life’.

Ku-Fu Movies
Of course, we can’t talk about Hong Kong and movies without mentioning its extensive back catalogue of Kung-Fu films. The country introduced the rest of the world to this genre of film back in the 70s, and blockbusters like Enter the Dragon, have become long-standing fan favourites.

Bruce Lee
And of course, we can’t talk about Hong Kong, films and Kung-Fu films in particular without mentioning Jackie Chan. Born in Hong Kong he went on to become one of the biggest Hong Kong film exports, starring not only in films of the Kung-Fu genre but many others and even has a star on the Hollywood Walk of Fame.

Sally Phillips
Famed British actress Sally Phillips, of Smack the Pony and Miranda fame, may seem like an odd choice for this list. But did you know, even though she is one of Britain’s most loved comic stars, she was actually born in Hong Kong? Fancy that.

Discover Hong Kong with a holiday from Netflights.com

AsiaHong Kong
Don’t know where to start? Inspire me...