How to spend 48 hours in Abu Dhabi

When booking a holiday to the UAE, most people immediately opt for Dubai. However, Abu Dhabi – just 150 kilometres to the south – is an equally exciting prospect. It may be more understated than its famous neighbour, but that’s part of the appeal. Its cultural attractions and family-friendly activities have afforded it a reputation as the rising star of the Middle East. And, as the wealthiest city in the Emirates, it’s got its fair share of seriously sleek architecture. So if you’re thinking about visiting, here’s how to spend 48 hours in Abu Dhabi.

Kick off your first day with a visit to the Sheikh Zayed Mosque. One of the only mosques in the region open to non-Muslims, this marble miracle is Abu Dhabi’s star attraction. It’s also the UAE’s largest place of worship. Conceived by the late Sheikh Zayed bin Sultan Al Nahyan, it can hold up to 40,000 people.

Inspired by Persian, Mughal and Moorish architecture, the Sheikh Zayed Mosque is as vast as it is ornate. Eighty two white marble domes of various sizes are held aloft by 1,000 jewel-encrusted pillars. Inside, you’ll discover gold-plated Swarovski crystal chandeliers and the world’s largest handmade carpet. There’s also a state-of-the-art library in one of the minarets, containing more than 50,000 rare books and manuscripts. To learn more about the construction of the mosque and the local culture, sign up for a free guided tour.

When you visit the Sheikh Zayed Mosque, remember it’s a religious site and not just a tourist attraction – so dress modestly. Women who don’t have the appropriate attire can always borrow an abaya (a loose robe-like dress). To help you decide what to pack, check out our guide on what to wear on holiday in Abu Dhabi.

After you’ve finished exploring the Sheikh Zayed Mosque, head over to Saadiyat Island. Slated to become Abu Dhabi’s premier cultural hub, this is where you’ll find the Louvre Abu Dhabi – the only Louvre outside Paris. Designed by Pritzker Prize-winning architect Jean Nouvel, it opened in late 2017 and is equally impressive inside and out.

Open on all sides, the Louvre Abu Dhabi has been designed as a micro-city, appearing to float above the sea. The 55 independent buildings are crowned by a perforated domed roof which allows sunlight to filter through. This creates an ethereal effect known as the ‘rain of light’. Inside the museum you’ll find works ranging from prehistoric artefacts to contemporary paintings, all arranged by theme. In addition to the permanent collection, the museum puts on four temporary exhibitions a year. There’s also a dedicated Children’s Museum designed for kids aged six to 12.

When you’ve had your fill of art at the Louvre, you should make the most of Abu Dhabi’s amazing weather. Stay on Saadiyat Island and visit the luxurious Saadiyat Beach Club, which caters to the most discerning of beachgoers. A day pass will set you back somewhere between £35 and £80 per person, depending on whether you’re going at the weekend or during the week and if you’re an individual or couple. There are also discounts for juniors, and for women on Mondays and Tuesdays (Ladies Day).

As well as an outdoor pool surrounded by cabanas, Saadiyat Beach Club has a workout room, spa facilities that include a sauna, steam room, Jacuzzi and plunge pool, and a private beach. While relaxing on the sand you might catch a glimpse of dolphins playing offshore, or even spot the Hawksbill turtles which nest in the area.

If you want to soak up the sun but don’t fancy paying top dollar, opt for Saadiyat Public Beach instead. Although it has fewer amenities, it’s just as nice as the beach at Saadiyat Beach Club. But don’t be fooled into thinking that because it’s a public beach it’ll be free to use. There’s still a small entrance fee, but it covers the cost of a sun lounger. And if you want to do more than just lounge around, there are yoga classes and eco-friendly watersports on offer.

Once night falls, and you’ve had a chance to wash the sand off, it’s time to think about dinner. Rising majestically above the Corniche are the ultra-modern Etihad Towers. Amongst other things, this five-tower, mixed-use complex is home to the prestigious Jumeirah at Etihad Towers hotel. Besides 382 elegant rooms and suites, the hotel has a wealth of dining options. There are 12 bars and restaurants, offering up a dizzying array of international cuisines. Whether you choose to eat here or not, find time for a pre-dinner drink at Observation Deck at 300. Located on the 74th floor of Jumeirah at Etihad Towers, it’s Abu Dhabi’s highest vantage point – so it’s the best place to see the city skyline. 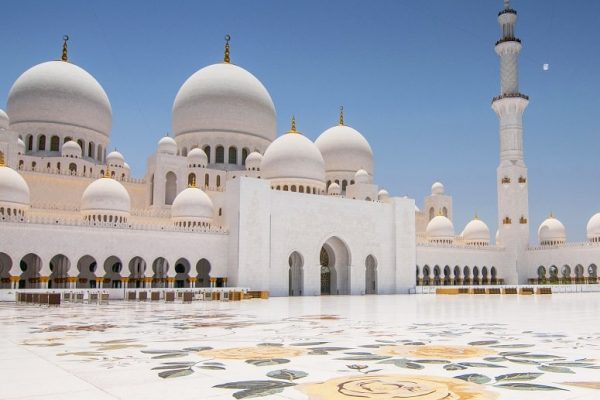 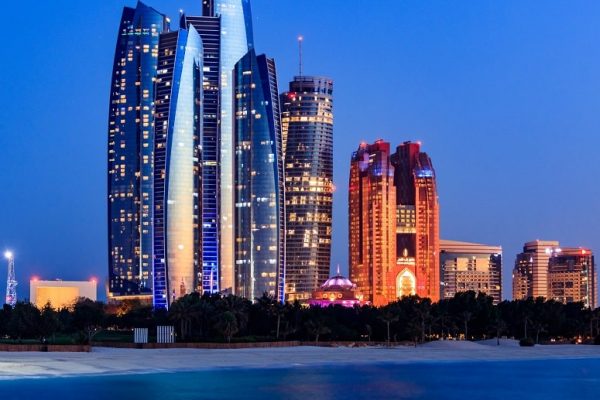 After yesterday’s cultural excursion, today is all about thrills and spills. Once you’ve finished breakfast, hop in a taxi and head to Yas Island. The most famous attraction here is the Yas Marina Circuit, which plays host to the Abu Dhabi Grand Prix every year, usually in November. But even if you’re visiting at a different time of year, you can still experience the track firsthand with one of the exhilarating driving or go-karting experiences.

Petrol heads should also check out Ferrari World Abu Dhabi – the first Ferrari-branded theme park in the world. Besides being able to put pedal to the metal in one of these incredible sports cars, you can ride the world’s fastest rollercoaster, Formula Rossa. Right next to Ferrari World you’ll find Abu Dhabi’s largest shopping centre, Yas Mall. Although not quite as large as the mammoth Dubai Mall, it has over 370 stores, more than 60 restaurants and cafes, and a 24-screen cinema complex.

If you want to cool down in the heat while still getting an adrenaline rush, check out Yas Waterworld. With more than 40 rides, slides and attractions, it’s one of the best waterparks you’re ever likely to visit. In true Emirati fashion, Yas Waterworld is home to a couple of world firsts. Dawwama is the world’s first and largest hydro-magnetic-powered, six-person tornado waterslide, while the Bandit Bomber – a 550-metre coaster – is the first with onboard water and laser effects.

If you’re visiting Yas Island with little ones – or even if you’re not – don’t miss Warner Bros Abu Dhabi. This climate-controlled indoor theme park has six immersive zones, including Gotham City and Warner Bros Plaza. As you wander round you’ll encounter your favourite cartoon characters and DC superheroes.

On your last night in Abu Dhabi why not treat yourself to a decadent dinner? And there’s nowhere in this city more decadent than the Emirates Palace. The palatial hotel – which Sex and the City fans will recognise from the critically panned second film – was designed to rival the iconic ‘seven-star’ Burj Al Arab in Dubai. Although the design could hardly be more different, it is equally as opulent.

Positively dripping in gold and marble, it has 114 ornate domes, an expansive private beach, and a luxurious spa, which offers gold and caviar body treatments. There’s also a marina where you can park your yacht – as long as it’s not more than 150 metres long. Those not staying at the Emirates Palace can still enjoy its 13 bars and restaurants. Taste award-winning Chinese dishes at Hakkasan; try traditional Emirati cuisine at Mezlai; or indulge in Italian classics at Mezzaluna. 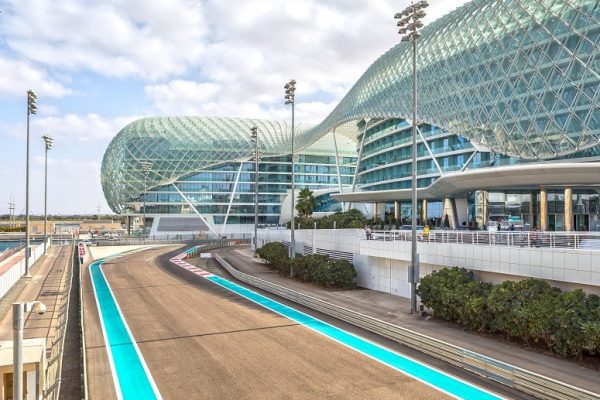 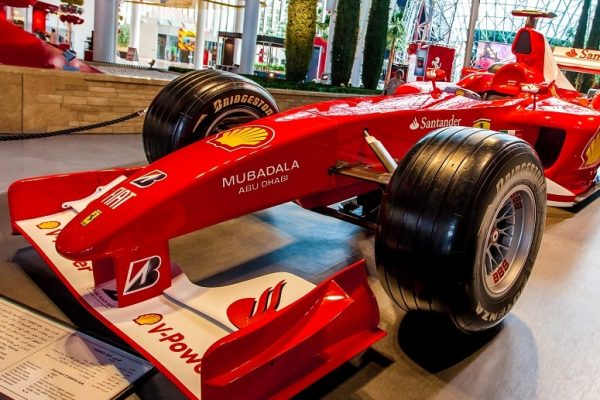 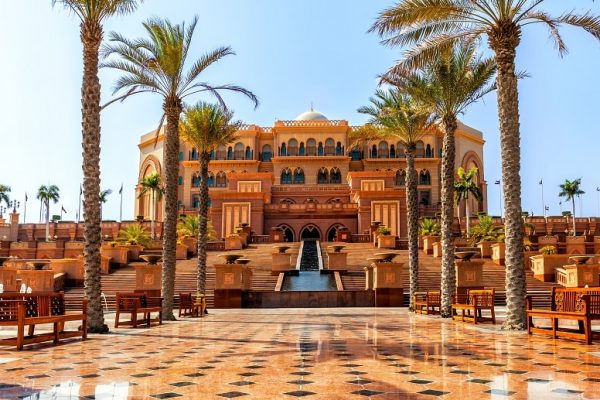 Feeling inspired to visit the Middle East? Check out our amazing flight deals.

Maybe you’re planning a trip to Australia and you’re changing planes in the City of Gold. If so, here’s what to know and where to go during a stopover in Dubai.