Nearly every Thailand holiday starts with flights to Bangkok, as it’s the only city with direct routes to the UK. Vibrant and chaotic, the capital’s mix of historic temples, hidden markets and sublime street food put it amongst the most exciting cities in Asia. So even if your final destination is a beach resort on one of Thailand’s beautiful islands, it’s worth spending a few days exploring the Big Mango first. And if you feel like splurging on some high-end accommodation, these are five of the best hotels in Bangkok. 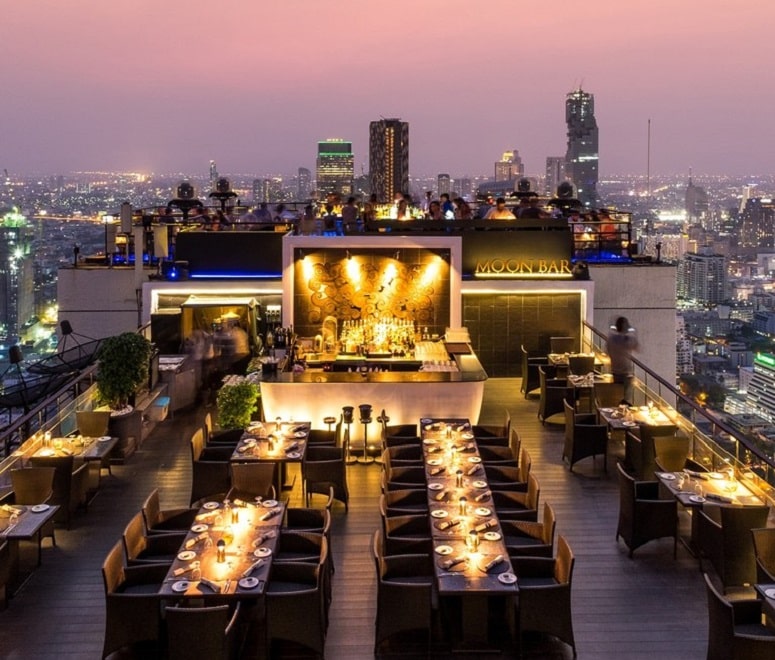 With all-suite accommodation, even the standard rooms at Banyan Tree are amongst the largest at any hotel in Bangkok. Horizon and Oasis Retreat Rooms, and also the one-bedroom suites, are fairly traditional, while the Serenity Club Rooms are more modern. All offer views over the Chao Phraya River or Lumpini Park – one of the most beautiful green spaces in the city.

The hotel’s holistic and indulgent spa, located on the 51st and 54th floors, is the highest in Asia. And the signature treatments make use of fresh, natural ingredients. While the health club, fitness centre and swimming pool are all great, it’s Banyan Tree’s vast array of dining options that makes it one of the best hotels in Bangkok.

A mecca for foodies, it has 10 bars and restaurants. They offer everything from Thai street food to refined international cuisine. If you’re looking for something extra special, Banyan Tree operates two dinner cruises on the Chao Phraya River – one on a converted vintage rice barge. On the 61st floor of the hotel you’ll find the aptly named Vertigo Restaurant and Moon Bar. Arguably the best rooftop in the city, it offers panoramic views and is a great place to watch the sunset.

The Shangri-La Bangkok is essentially two hotels in one. It comprises two separate wings, each with their own entrance and lobby. The main Shangri-La Wing is more modern. The style here is largely contemporary, with the odd traditional Thai motif thrown in for good measure. The exclusive Krungthep Wing, meanwhile, is quieter and a bit old-school. While all rooms have balconies with river views, the decor’s a touch ostentatious – think brocade curtains, silk wall-coverings and chandeliers. The Krungthep Wing also has a private pool, not accessible to guests staying in the Shangri-La Wing.

With 802 rooms and suites spread across the two wings, the Shangri-La is one of the biggest hotels in Bangkok. It stretches for a quarter of a mile along the Chao Phraya. As with all Shangri-La hotels, there’s a CHI, The Spa – a tranquil retreat offering a range of luxurious treatments. In addition to a tennis court and riverside swimming pool, there’s a 10,000-square-metre state-of-the-art fitness complex. Its comprehensive class schedule includes yoga, Zumba, TRX and Muay Thai, plus many other activities.

When it comes to food, there are a number of options. Salathip serves authentic Thai cuisine in traditional teak pavilions, and puts on a nightly dance performance. Or on the Horizon Cruise you can spend a few hours onboard a swish boat, spotting key landmarks while enjoying a delicious buffet dinner. The Chocolate Boutique, in the Shangri-La Wing lobby, is particularly popular. Stop by and indulge in signature chocolate cakes, pralines and freshly baked pastries, or try the creative chocolate drinks. 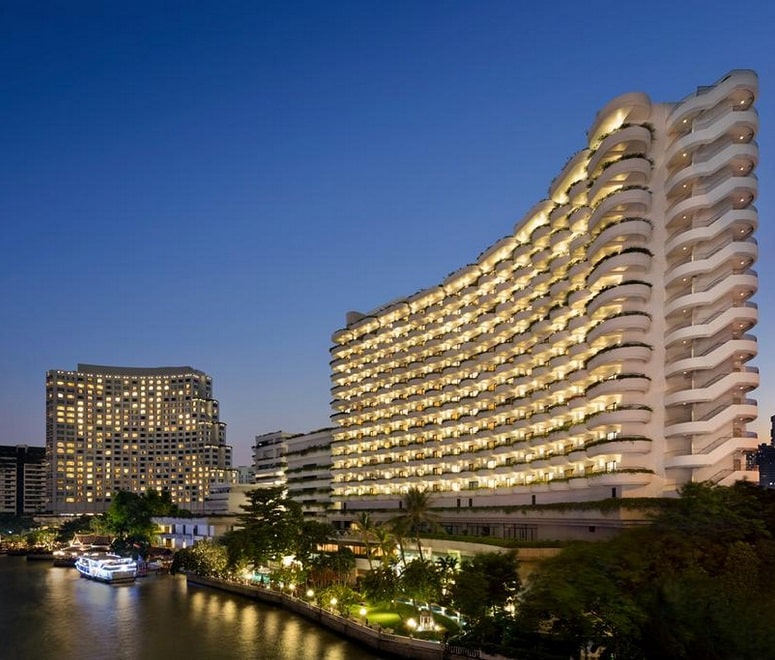 The Mandarin Oriental Bangkok is a true icon. Built in 1876, it’s the oldest hotel in the prestigious Mandarin Oriental group, and one of the classiest hotels in Bangkok. It has a storied past and, over its 144-year history, has seen many a famous face pass through its doors. The list includes sports stars, world leaders and royalty – Tsar Nicholas II of Russia, Neil Armstrong, Richard Nixon, Elizabeth Taylor, Princess Diana and David Beckham have all stayed here.

A plethora of guests from the world of literature – Joseph Conrad, Graham Greene, Noël Coward, John Le Carré, plus others – influenced the naming of the Authors’ Wing. This wing and the Garden Wing were both spruced up in 2016, and the River Wing has just reopened following a major facelift. Costing a whopping a £70 million, it’s the largest renovation in the hotel’s history. The two pools have been redesigned to include more cabanas and relaxation areas, and there are some plush new suites.

The revamped Oriental Suite is now the largest room at the Mandarin Oriental Bangkok. Occupying the top floor of the River Wing, the two-bedroom oriental-style penthouse covers more than 4,000 square feet. It comes complete with a wraparound terrace, private dining room, an entertainment room, multiple sitting areas and a kitchen. All this will set you back 450,000 THB a night – that’s approximately £11,350.

The Peninsula has everything you’d expect from a five-star hotel in Bangkok. Inside the distinctive wave-shaped building, the 370 rooms are fitted with a dressing room and seating area, and offer spectacular views of the Bangkok skyline. Service is impeccable, the spa’s opulent, and the atmosphere’s relaxed, if a touch formal. Outside, you’ll find two floodlit tennis courts and one of the best swimming pools in the city. Spread over three tiers, it’s an impressive 88 metres long. That’s almost twice as long as an Olympic pool.

One of the best things about staying at The Peninsula Bangkok is the Peninsula Academy. Designed to provide guests with local lifestyle experiences and unique cultural insights, it offers a range of exciting activities and bespoke programmes for both adults and children. These range from cooking and art classes to mangrove eco adventures and even the opportunity to become a DJ for the day at a Bangkok radio station. And if you want to explore the city, getting around couldn’t be easier. The hotel has a number of vehicles, including a customised fleet of Rolls-Royces, BMWs, a private tuk tuk, and a shuttle boat. Or if you prefer to fly, there’s also a helicopter, which takes off from the rooftop helipad. 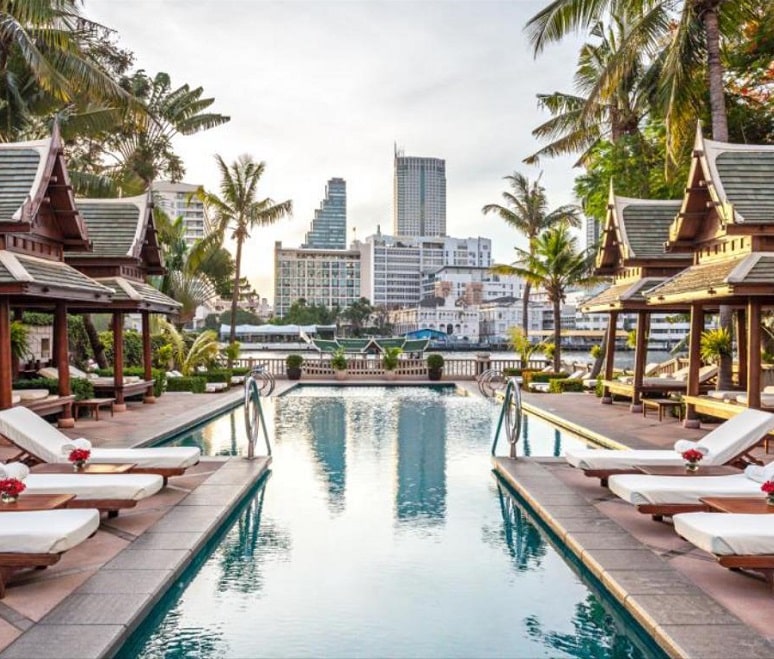 SO is a boutique offshoot of the renowned Sofitel brand. While just as luxurious as other Sofitel hotels, those in the SO range are more avant-garde, with a livelier ambiance. Thoroughly contemporary, this is one of the most creative and fashion-forward hotels in Bangkok. French fashion designer Christian Lacroix worked with five leading Thai designers to create the aesthetic, which includes more than a touch of theatrical flamboyance.

The overall design concept is based around the Chinese elements of water, wood, earth, metal and fire. And all of the rooms are outfitted according to these five themes. The all-white metal rooms are sleek and gleaming, while the earth rooms are inspired by caves and feature prehistoric-style drawings on dark blue walls. Rooms in all categories come with floor-to-ceiling windows, free Wi-Fi and an Apple Mac mini. Three of the suites even feature in-room spas.

The 10th floor is where you’ll find the hotel’s infinity pool and Water Bar. On the last Saturday of every month this venue plays host to the SO Pool Party. With international DJs and some great drinks deals, it’s one of the best pool parties in Bangkok. Other events at SO Sofitel Bangkok include [email protected] – a wine and cheese tasting – and the Fashion Hi-Tea. And this is yet another hotel in Bangkok with a chocolate boutique – or Chocolab as it’s called here. As well as ready-made options, this one offers cooking classes, so you can create your own sweet treats too.

Whether you fancy a city break in Bangkok or want to discover idyllic beaches, we’ll find you an amazing deal on your Thailand holiday.

And, if you want to save some cash, check out the top 12 free things to do in Bangkok.