An alternative New Year’s: a safari in Zimbabwe 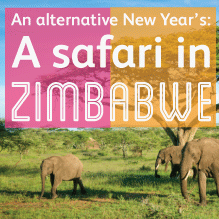 Tired of the same old song and dance when it comes to ringing in the New Year? If you’re looking to embrace adventure with open arms in 2016, there’s no better way to kick off the year than with a safari in Zimbabwe.

A country that’s less crowded with foreigners, you’ll be able to take in a slice of the real Africa without throngs of tourists getting in the way of your shots.

If this alternative to the usual NYE festivities sounds like a plan you want to undertake this year; read below for all the information and inspiration you’ll need to make it happen.

National parks that are brimming with exotic wildlife

There are many national parks in Zimbabwe to choose from, but there are a few that stand head and shoulders above the rest. One of these is Hwange National Park, which offers a great deal of variety when it comes to landscapes and fauna. From semi-arid desert in the south to lush forests in the north, and over 100 species that includes lions, leopards and elephants; you’ll find what you’re looking for to have a legendary safari experience.

Seeking out species that live in and around large bodies of water? Matusadona National Park offers a large man-made lake, which supports a healthy population of crocodiles, water buffalo, and all sorts of big cats.

Mana Pools National Park is great for walking and canoeing safaris, as the Zambezi River draws antelopes, zebras and elephants that are used to the presence of people. Mind your distance though, as these animals are still wild, and can do unpredictable things at the drop of a hat.

Finally, Gonarezhou National Park is the least visited park in the country. This gives those looking to get away from it all a chance you immerse themselves in the wild, with the elephants and buffalo that call this massive protected space home.

Glamping in luxury: the perfect way to welcome 2016

While you’ll be situated in nature for the duration of your safari tour, that doesn’t mean you have to be uncomfortable as 2015 turns in to 2016.

Many tented rooms in Zimbabwean safari camps are elegantly furnished, and come with en-suite bathrooms. Some camps even have plunge pools in their common areas, giving you a blissful place to enjoy a sun-downer beer, as you discuss the wildlife you sighted with your new found friends.

There’s more than just snapping selfies with an elephant

After you’ve emerged from the wilderness, there’s plenty more to do in the country to round out your visit.

The biggest attraction in Zimbabwe is Victoria Falls, which stands alongside Niagara Falls in North America and Iguazu Falls in South America, as one of the most picturesque cataracts in the world.

When you’ve finished appreciating the raw power of this natural wonder of the world, take to the Zambezi River in a raft, and ride one of the wildest white water rides on the planet.

The class V rapids will likely spit you out of your boat at some point, but being located in the tropics, the water will be anything but bone-chilling.

With all this to see and do, and more, give your New Year’s Eve as twist in Zimbabwe.

AfricaFestivalsNew Year's Eve
Don’t know where to start? Inspire me...