The best food places in Singapore 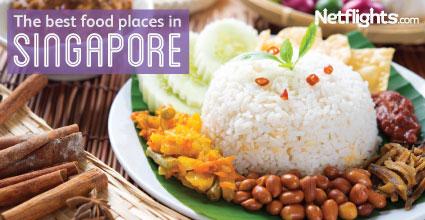 The best food places in Singapore

Singapore has been lauded by the international travel media for having a food culture that stands out as the best in the region, and arguably, among the best in the world.

If you’re bound for this global city in the near future, be sure to spend a full day hunting down the best bites this culinary heaven has to offer. You might have to loosen your belt a few notches towards the end, but it’ll all be worth it.

Skip breakfast at your hotel and begin your day exploring Singapore cuisine, by having the most important meal of the day at Yu Kun Kaya.

Kaya toast, a Singaporean favourite when it comes to fuelling up for the day, has been the staple of the morning menu here since 1944.

With tasty coconut jam sandwiched between its two slices, runny eggs served on the side and a cup of coffee so strong and sweet you can’t help but get wired for the day that lies ahead; it’s not hard to understand why.

If you’d rather fill your belly with some dim sum instead, then make your way over to Yum Cha, a Chinatown institution be found at 20 Trengganu Street.

With servings only setting you back about £1.50 ($2.34 USD as of August 2015), you’ll be hopscotching between prawn dumplings, fried tofu and other bite-sized morsels. This is an experience that’ll please your taste buds in a way western style breakfast could only dream of.

With all the unique meals served up in Singapore, picking a national dish from this deep field is a thankless task for any food enthusiast to even attempt (our condolences to the ones who did).

After much consternation, food writers have awarded this honour to one of two meals; Hainanese chicken rice, which was developed for the British during Singapore’s colonial days, and Laksa, which has long been a comfort food for the Chinese, Indian and Malay citizens here.

One of the most celebrated places to eat the latter is at 328 Katong Laksa, which can be found in the neighbourhood of the same name.

Possessing a sweet coconut milk base and loaded with prawns, beansprouts, noodles and tofu; it’s a lunch that may define your visit to this prosperous island nation.

As a result of Singapore focusing on developing its financial services industry, after becoming an independent city-state in the 1960’s, it’s become home to many expats.

These businesspeople hail from numerous Western nations, and are paid salaries that can be diplomatically described as being very generous.

Their posh compensation has inevitably brought a cornucopia of international cuisine. So if you want to sample some of the fine cuisine their wallets have attracted, visiting a restaurant like Le Bistrot Du Sommelier will do the trick.

Focusing on rustic French cuisine, chefs from other exclusive eateries dine here on a regular basis; which is always a good sign when looking for a quality place for a five star meal.

Whatever you end up ordering, be sure to try their homemade rillettes, between the multiple courses you’ll be served. This is a pate style spread made from a variety of meats (duck, pork and chicken, among others), which is beyond heavenly when eaten atop fresh French bread.

If you’d rather stay in the Far East when it comes to splurging on a fine dining experience, then dropping a couple of hundred quid at Waku Ghin will achieve this objective handily.

A restaurant dealing in ultra-high end Japanese food at Marina Bay Sands Casino Resort, you’ll take on a journey through a menu consisting of ten courses. This menu features a variety of interpretations of common Japanese seafood like sea urchin and shrimp.

Dinner is served in private cocoon style rooms; giving this place an intimacy other high end restaurants struggle to match.

At this point, the sun will have long since disappeared into the western horizon, which means only one thing; it’s time to party.

Retaining your spirit of Singaporean discovery, seek out some signature cocktails at Nutmeg & Clove; a stylish venue in the midst of countless beer joints on Singapore’s Club Street.

Keeping true to its Chinese roots, they find inventive ways to insert Asian accents into many common cocktails. But if you’re seeking something that’s indicative of this city, you need to try their version of the Singapore Sling.

While it was first slung by a bartender at the Raffles Hotel in 1915, locals say Nutmeg & Clove’s version lacks the syrupy sweetness of the version served to tourists at the former establishment. They swap this for hibiscus-modified gin, and date syrup, that’s been aged in a nutmeg barrel (appropriately enough).

So it’s 3 am and you’re stomach is growling; think Singapore will have nothing for you at this outrageous hour?

Many hawker centres keep going well into the night, even in a city notorious for being uptight by regional standards.

Fu Ming Shu Shi is one of the places local revellers will go for an after club treat; usually, they end up ordering what’s locally known as a Singapore carrot cake.

Known formally as Chai Tow Kueh, it’s neither of these things, as it’s an omelette made with daikon; a white radish that’s very hard to find outside of the Far East.

Greasy but good, it’s the perfect way to cap off an action-packed day hunting down the yummiest things Southeast Asia’s food capital has to offer.

Discover the food of Singapore with Netflights.com

FoodSingapore
Don’t know where to start? Inspire me...