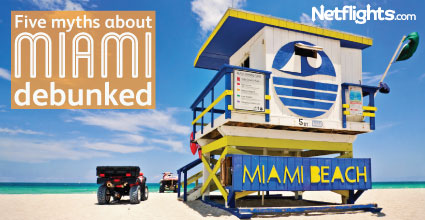 Oh, Miami, clear waters, sandy beaches, and art deco palmed fringed landscapes alongside extravagant shopping are all things you’ve become renowned for. But there are a few things claimed to have happened in Miami.

Although many of the claimed things did occur, many didn’t. Here are our top five Miami myths debunked.

The Everglades is one of Florida’s most well-known and most popular tourist attractions. Even if you haven’t been there yourself, chances are you know about them. However many years ago a 19th century industrialist became obsessed with draining the Everglades, in order to create farmland. Apparently, he tried and failed on many occasions, and the rumour goes that because of this he ended his own life. However, this simply isn’t true, as he died of natural causes; maybe he just stopped trying and realised how wondrous they truly are.

Notorious gangster Al Capone has earned himself a place in legendary pop culture for all the wrong reasons. But one thing he’s known for in Florida is hiding out in Miami Beach during the 1920s, apparently living it up, or down, in the opulent Everglades Suite at the Baltimore Hotel. However, Capone laid low from the 20s until the 40s, and when he re-emerged was extremely ill. So if anyone claims to take tours to Al Capone’s former haunts, just keep on walking.

When visiting Little Havana you’ll find a historic building made entirely of coral rock on NW 7th Street and 22nd Avenue. But many will tell you this place, notable for its building materials, is where Fidel Castro once stayed. This isn’t true, however, and despite visiting Miami, the famous cigar smoker never actually stayed; so just enjoy the exterior.

Hurricanes get such a bad name, and surely for good reason. However, whenever there’s a dip in the real estate market in Florida, people who claim to know the history of the Sunshine State announced this first happened following a mighty hurricane that wiped out the city in 1926. This isn’t true, however, as the property bubble had already burst and the developers were already long gone from the Miami streets.

Possibly the most famous music video in history, Michael Jackson’s Thriller is a mini-cinematic masterpiece we’ve all seen at some time in our lives. But following the King of Pop’s death in 2009, many in Miami began to claim the iconic video had scenes filmed in Charlotte Jane Cemetery in Coconut Grove. This was later debunked by the video’s director, John Landis, who said it was filmed at an East L.A. meatpacking plant; go figure.

Book a flight to Miami with Netflights.com today!

FloridaMiamiUSA
Don’t know where to start? Inspire me...