Five of the best things to come from the Caribbean 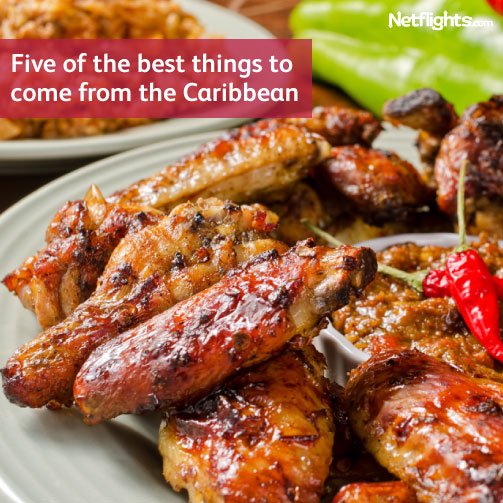 Five of the best things to come out of the Caribbean

The Caribbean is a diverse and colourful collection of wondrous places just waiting for you to explore. With an eclectic culture, boasting flavoursome food, soothing music and delicious drinks alongside the glorious weather – you’d be a fool not to visit.

But as a place bursting at the seams with such wonders, have you ever considered what Caribbean influences you’ve most likely introduced into your lives already?

Here’s our selection of the top five things to burst out of the Caribbean and change our lives forever.

The Caribbean has given us some of the world’s most popular artists, and along with it some amazing global hits. Rihanna, Nicki Minaj and Sean Paul have all dominated our charts over the last decade or so, but there’s one artist that burst out of the Caribbean and became a generational favourite; Bob Marley.

Popularising reggae music across the globe, Marley has had people moving to hits like ‘One Love’ and ‘Jamming’ for the best part of 40 years, and is arguably the most recognisable music icon in popular culture. If you happen to be visiting Kingston in Jamaica, make sure you stop by the Bob Marley Museum, which displays many Marley artefacts in the star’s former home.

Yes, the world will be eternally grateful for the musical gifts of Bob Marley. However we still can’t forgive the Caribbean for The Baha Men and their eternal conundrum of ‘Who let the dogs out?’

Bob Marley, the gift that keeps on giving. Dreadlocks may have history stemming back to Northern Africa, but it’s their close association to the Rastafarian movement, and in particular Marley after his surge in popularity during the 1970s, making them a staple in Western society.

As the decades have gone on, you can spot dreads most places, and they’ve become an enduring look for many people.

Ok, so this one may be a stretch but hear us out. Although the product stemmed from a successful pitch on BBC series Dragon’s Den, the sauce was created by Levi Roots, who was born in Jamaica and developed it to ‘recreate’ the flavour of his grandmother’s original jerk chicken seasoning’, which began its life in Jamaica.

Either way this sauce has given the UK a taste for Caribbean flavoured food, and we’ve seen Reggae Reggae Sauce become a household name – found everywhere from Birds Eye chargrills and KFC to Domino’s Pizza.

Maybe the previously mentioned sauce kick started a Caribbean cuisine obsession in UK, or maybe it was merely riding a wave that was already starting. But recently we’ve diversified our dishes, and Caribbean spice is something we’ve come to love.

And nothing is spicier, more delicious or more Caribbean than jerk chicken. You can find recipes for this traditional Jamaican dish most places; even Gordon Ramsay has his own variation. Dating back to the indigenous Taino people, the dish is prepared by dry rubbing or wet marinating the meat with the hot Jamaican jerk spice, before barbecuing – it’s also popular on pork back in the Caribbean.

A drink that’s become associated with pirates, rum is mainly produced in the Caribbean.

That being said, us Brits do enjoy a drink and rum has become popular over the years – there’s even an annual UK Rumfest, which was recently held in London’s Earls Court for its eighth year.

Give yourself a true taste of the Caribbean by mixing yourself a delicious cocktail like the Dominican Republic favourite Santo Libre, the Martinique native ‘Ti Punch or the Barbados inspired Dark & Stormy.

As you can see, there’s more of the Caribbean around you than you may have known. Enjoy a Caribbean holiday with Netflights.com.

Caribbean
Don’t know where to start? Inspire me...