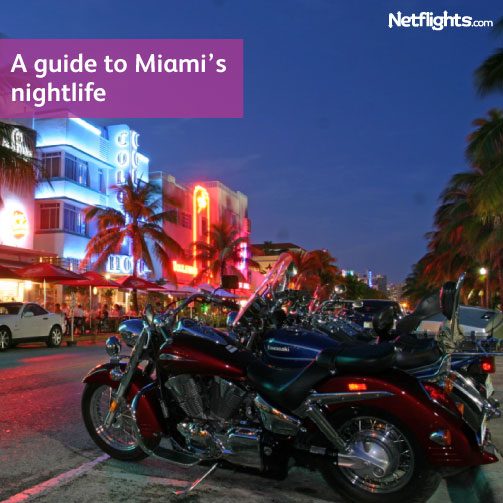 Miami is famous for two things – its beaches and its hot, Latin-inspired, neon-infused nightlife. A trip here wouldn’t be complete without a night or two on the town, experiencing the city’s high-energy nightclubs, glamorous lounges and popular local bars.

However, it takes some insider know-how to get the best of Miami’s nightlife. This is partly because there are so many venues to choose from. It’s also because some of Miami’s clubs are more exclusive than others.

That’s not to say you should be intimidated. Although some clubs appear to restrict entry to all but celebrities, models and the ludicrously wealthy, others are much more democratic – and there’s no shortage of welcoming live music venues, elegant lounges, pool-side bars and comfortable local watering holes.

The South Beach strip, with it

s Art Deco buildings, super-trendy clubs and lavish lounges, is the main place to “see and be seen” in Miami. This is where to head if you’re hoping to rub shoulders with celebrities or to show off your beach tan and long hours at the gym.

It’s also where you might encounter the most trouble getting into popular clubs. Note that often, having your hotel concierge phone ahead is enough to get you past the red rope at even the more exclusive clubs. Another good option is to pre-book VIP seating, which may come with a price tag but will secure your entry.

Among the best South Beach (or “SoBe”) clubs and lounges are:

The nightlife in downtown Miami is less glitzy and exclusive than the South Beach scene, but it’s just as energetic and possibly even more varied. Both downtown and in the increasingly trendy Design District, you’ll find a mix of “happening” clubs, live music venues, homely pubs and grittier bars.

Located on 11th Street, Club Space is a converted warehouse that has developed into one of the hottest clubs in Miami. It features top DJs, a dance floor that spans over 2,700 square metres, an incredible sound system, impressive laser and light shows and even an open-air patio, where you can take a break from the night-long partying and get some fresh air.

Head to Club 90 Degree, as an alternative to Little Havana, for some of the best Latin dance music around. The club includes two dance floors, each featuring a different Latin music style, from salsa to merengue or reggaeton.

Tobacco Road on South Miami Avenue is one of Miami’s longest-running bars, with a history spanning over 90 years and Al Capone and B.B. King among its many famous patrons. Tobacco Road is justifiably popular for its nightly live music (rock, blues and jazz), cold beer and good, home-style food. If you can help it, don’t miss the bar’s Maine lobster night on Tuesdays.

The drinks aren’t cheap, but Nocturnal makes up for this with its glamorous décor, impressive sound and lighting, choice of three dance floors and multiple bars and lounges. The club also features a roof-top terrace.

For live music, along with good beer, and honest pub-style food in a stress-free environment, head to one of downtown Miami’s Irish pubs. Popular choices are Brickell Irish Gastropub and the Lucky Clover Irish Pub.

BarsMiami
Don’t know where to start? Inspire me...