Outside the zoo: spotting Australian wildlife 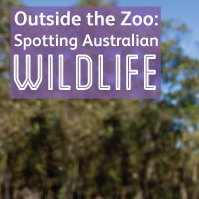 Outside the zoo: Spotting Australian wildlife

Australia is a wilderness of excitement in every sense of the word. Not only will you get to experience beautiful beaches, surfing in crystal waters, amazing weather and some of the best natural and man-made landmarks on earth; but you can also experience fascinating wildlife.

With many indigenous species, visiting one of the many zoos and sanctuaries is one way to explore the Australian wildlife.

But for a truly authentic way to experience the animals of Oz, seeing them in their natural habitat is the only way. Here are some tips on how to see Aussie wildlife at its best.

In North Eastern Australia you’ll find the Wet Tropics, a UNESCO World Heritage Site of unrivalled beauty. The oldest rain forest on Earth, those looking to be wowed by wildlife could spot everything from the fascinating platypus and the equally intriguing Lumholtz’s tree kangaroo, alongside lizards, pythons and Australian cassowary, a flightless bird. It’s recommended that you visit this area on a day to night tour, as most of the animals are nocturnal, to get the full effect.

From the forest on land, to the one sitting under the waters of the Great Barrier Reef; the largest coral reef system on earth is one of Australia’s most visited tourist spots, and for good reason. Snorkel or dive under the waters and experience 400 different varieties of coral and more than 1,500 fish; you may even spot manta rays, sharks, dugongs and loggerhead turtles. And make sure you explore Cod Hole, where a number of guides take diving excursions to hand feed giant potato cod.

Tours to the reef depart from Port Douglas, Whitsundays, Townsville and Cairns.

From the reef to the coast, Monkey Mia, which can be found along Australia’s magnificent Coral Coast, allows you to see wonderfully elegant dolphins, as they’re fed by rangers. Although touching the dolphins is frowned upon, they often swim past visitors and you could be chosen to feed them yourself. Nearby you’ll also find the Ningaloo Marine Park, where you can swim with the world’s largest fish, the whale shark, from April to June.

Endemic to Australia, the kangaroo has become the country’s unofficial symbol, and the best place to see them in the wild, according to many, is Kangaroo Island. The third largest island, you can see these majestic animals hop freely, and in the Western Australian outback you’ll find the western grey kangaroo and the red kangaroo. Growing to over six feet tall and weighing more than 80 kilograms, the ‘big red’ is the world’s largest marsupial.

From the loveable looking kangaroo, to the terrifying jaws of the crocodile; in Western Australia you can spot these in their natural habitat. Fresh water crocodiles are commonly spotted in Kimberley around areas such as Tunnel Creek, Windjana Gorge, Geikie Gorge, the Ord River and Lake Argyle.

The Kimberley coast, in areas such as Derby and Broome, you’ll find the larger saltwater crocodiles. It’s a terrifying, yet exciting experience to see these beasts in the wild, yet it’s advised to join a knowledgeable tour guide rather than heading out alone.

On the island of Tasmania, just off South Eastern Australia, will give you the opportunity to see the animal famed by the animated Looney Toon; the Tasmanian devil. But not only will you spot this indigenous animal, you could also spot possums, forester kangaroos, wombats and wallabies. The best place for this is at the Narawntapu National Park.

Discover the animals of Australia for yourself buy booking your Australia flight, hotel or holiday now with Netflights.com

AustraliaTasmaniaWildlife
Don’t know where to start? Inspire me...