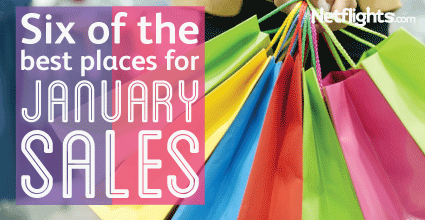 The best places for January sales

For some, New Year is a time for reflection, a time to look back on another year and make plans for the coming months. But let’s face it, the promises you make to yourself aren’t going to last too long, and there are so many January sales your ‘I won’t buy things I don’t need’ resolution is doomed from the start.

On the other hand, maybe one of your new resolutions is to get more value for your money. Either way, here are a few destinations to bear in mind if you’re sale-seeking this January.

Despite chilly temperatures, Madrid’s near constant blue skies make it a bright and crisp post-Christmas destination. After the Three Kings celebrations on January 7th, the historic city will be teeming with keen shoppers seeking something a little different. The trendy neighbourhood of Malasana is home to vintage shops perfect for lovers of art and fashion, while more established names can be found in Alonso Martinez and on the city’s number one high street, Fuencarral. Break up your bargain hunting with legendary tapas and a glass of Rioja in the barrio of La Latina, and you’ll quickly start to appreciate the Spanish way of life.

In between the cultural giants of New York City and Washington DC, Philadelphia is sometimes knocked down the list of priorities for tourists. Where the city comes into its own though, is during sales season. With tax-free clothing and shoe shopping the city is now a retail-therapy hotspot, offering lower prices than anywhere else, especially during the January sales. Once the bargain-hunting frenzy quiets down, why not head to Independence Hall for a taste of American history; it’s where both the Constitution and Declaration of Independence were signed.

Every January tourists visit Paris for a whole lot more than its landmarks. Beyond classic views of the River Seine and the Eiffel Tower, the French capital has some of the finest shopping in Europe. With the winter sales come huge discounts on chic household names such as Christian Dior and Yves Saint- Laurent, ensuring you won’t leave the fashion capital of the world without a few designer pieces. Throughout the year Paris’ history, culture and overall charm make it one of the most popular destinations on the planet, so why not visit in January for a chance to search for some bargains too?

For shopaholics, the post-Christmas sales in New York are as good as it gets. With more shops and department stores than you could ever feasibly visit, along with the single biggest shopping paradise in the world, Macy’s, people flock here for bargains and never leave empty-handed. With world famous sights including the majestic Statue of Liberty and a host of other impressive skyscrapers, you’ll never be stuck for things to do in the city that never sleeps – especially if you like to shop.

London’s sales literally start as soon as Christmas ends, as thousands hit the city’s streets to make Boxing Day one of the biggest shopping days of the year. While all the big department stores from John Lewis to Harrods offer huge discounts, designer brands and high street fashion prices are also slashed, with Bond Street and Oxford Street by far the most popular shopping destinations. Bargains in hand, dress up and hit the West End for a night out, or take a walk along the South Bank under the watchful gaze of the Houses of Parliament.

The historic streets of Boston are the place to be for shopping fanatics this January. Stores and shopping malls are dotted around America’s oldest city; making it feel like one huge outdoor museum. Boston is known for its heady mix of high street stores and unique boutiques, and because this part of Massachusetts has such a large student population, there’s plenty of quirky bargains to find. In a city which has developed into one of America’s cultural and educational hubs, you won’t be stuck for things to do once the shops close.

BudgetShoppingShopping Holidays
Don’t know where to start? Inspire me...