The Ghostbusters guide to New York

There’s no better place to feel part of the action than in New York City.

Ghostbusters has been everyone’s favourite extermination service for the last thirty years, and with the rumour mill recently suggesting an all-female lead third installment; the Ghostbusters bug is still very much alive.

Fans of the franchise can get their full geek-on when visiting New York, with pivotal locations dotted throughout Manhattan. For an exciting NYC adventure with a twist, we’ve listed some important sites to visit from the movies. 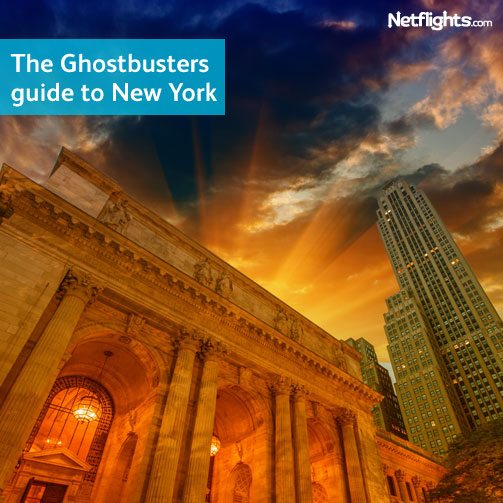 The iconic building used as the Ghostbusters’ base was seen countless times throughout both films. When exploring the locations of this popular comedy, this clearly takes the top spot. Located on N. Moore Street in Manhattan, the building is still a fully operational fire station to this day, and carries the real name of ‘Hook & Ladder 8’.

Located on 5th Ave on the island of Manhattan is the iconic New York Public Library, where the first film began. Featuring the first supernatural appearance in the film, this is the second biggest library in the United States, and the third largest in the world. Although the library is a magnificent place to visit, featuring over 50 million items, the interior for the actual film was shot in Los Angeles.

When they got thrown out of University

Although only featured briefly during the beginning of the film, this is where it all began for the Ghostbusters. After being thrown out of university, this is where Ray and Peter discuss their future. Situated on Broadway between 116th and 120thStreet, Columbia University is a remarkable piece of architecture. Founded in 1754 it’s a great example of American student life, and administers the Pulitzer Prize annually.

Restaurant where Louis gets attacked

The Tavern on the Green is the spot where Louis is attacked by a ghost beast and becomes the Key Master. However this location is somewhere you simply have to visit, due to its significance in New York culture. Running since 1934, with a brief stint as a gift shop from 2010 – 2012, this award winning restaurant has featured in many films and sitcoms. It’s also the second-highest-grossing independent restaurant in the United States.

This is the moment Ray takes out three mortgages in order to purchase the fire station that becomes the Ghostbusters’ base. Although not a lot was filmed here, the building used is the Bank of New York, found on Wall Street – a fascinating and iconic area to check out nonetheless.

Where Pete makes a date

The Lincoln Center for the Performing Arts is a complex of buildings, displaying stunning modern day architecture created by architects like Philip Johnson, Max Abramovitz and Lee S Jablin. Situated in the Lincoln Square neighbourhood of Manhattan, the fountain outside is where Peter tells Dana about Zuul, arranges a date and meets ‘The Stiff’.

There may not be much to see here, aside from an apartment block. But this area has great importance within the film; making it a great place to take a walk for die hard fans. So what happens here, well it’s where Dana lives, and the gateway used by Zuul to cross into our dimension; also referred to as ‘Spook Central’.

Finally, there’s Columbus Circle. Named after Christopher Columbus this is a heavily trafficked intersection of New York, situated next to the Time Warner Center. The centre of the circle features a statue of Columbus himself, erected to celebrate 400 years of his landing in the Americas. But what’s the significance? Well this is where we saw the giant Marshmallow Man making his way to Dana’s apartment. And who could forget him?

Whether you take a passing interest or you’ll be camped outside the fire station dressed as Slimer, why not enjoy an New York holiday with a difference?