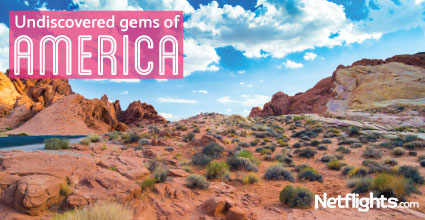 The USA is one of the world’s top tourist destinations, with millions of visitors flocking to the country every year. It’s got something for everyone – beaches in Florida, natural wonders like the Grand Canyon, vibrant cities like New York and Las Vegas. But there’s a lot more to America than the big names. This huge country also has plenty of lesser-known spots just waiting to be discovered. And here are seven worth checking out on your next trip stateside.

Along the coast from the border with Florida, Alabama’s Orange Beach has the same white, powdery sand and clear blue waters, but without the crowds. If lazing on the beach isn’t energetic enough, you can try surfing, kayaking, parasailing or ziplining. The Gulf of Mexico is famous for its marine life, so head out dolphin watching or try your hand at deep sea fishing. If you don’t catch anything, there are plenty of great seafood restaurants serving local dishes like gumbo (a spicy seafood stew).

The southwest USA is full of spectacular landscapes – from the Grand Canyon to Monument Valley. But near Winslow in Northern Arizona is one that’s really out of this world. Almost a mile across and 500 feet deep, the Meteor Crater is the best-preserved meteorite impact site on Earth. It was created by an asteroid 50,000 years ago, and Arizona’s dry climate has kept it in tact ever since. The strange landscape is as close as you’ll get to space, according to the Apollo astronauts, who used it for moon-landing training.

Often overshadowed by California’s other major cities – San Francisco and LA – Oakland is rapidly becoming a hidden hotspot for foodies. Whether your tastes are Michelin-starred or food trucks, you’ll find plenty to feast on. The city is incredibly ethnically diverse and that’s reflected in its restaurants, with everything from Ethiopian to Burmese cuisine. You can take tasting tours around its different neighbourhoods, and get your caffeine fix at the west coast’s only coffee museum.

Where America meets Germany, Leavenworth is a Bavarian town on the edge of Washington’s Cascade Mountains. Its gingerbread-style houses are home to Bavarian restaurants, Swiss chocolates, music box shops and even a nutcracker museum. In summer you can hike to the Enchantment Lakes, in autumn they have their own Oktoberfest, and in winter the town has a Christmas market with roast chestnuts and carols; usually complete with a picture-perfect sprinkling of snow.

With ‘Keep Louisville weird’ as an unofficial city slogan, you know this Kentucky city is going to be something different. The home of the Kentucky Derby, it’s now hipster central, with quirky bars, galleries, pool halls and flea markets. You can also tour Waverly Hills Sanatorium, a former TB hospital that’s said to be the most haunted place in the world – though you may need a trip along the city’s Bourbon Trail afterwards, to steady your nerves with a mint julep (bourbon, ice and mint).

Just 50 miles from the bright lights of Las Vegas, the Valley of Fire is wild in a completely different way. Nevada’s oldest state park stretches over 40,000 acres, with dramatic, jagged, flame-coloured sandstone rocks that gave the park its name. At sunrise and sunset it looks even more like the rocks have caught light, as they glow deep red. The extreme hot and dry climate has preserved ancient trees and turned them to wood, as well as 3000-year-old Native American rock paintings.

Off the coast of Anchorage in Alaska, Kodiak Island is America’s second largest island. Walking past orthodox churches and onion-domed buildings you might think you’ve been transported to Russia, but these days Kodiak is an all-American fishing port. Two-thirds of the island is a nature reserve with elk, otters, seals and whales found on and off shore. But the island’s most famous resident is the local Kodiak bear, one of the world’ largest bears at up to a giant three metres tall.

Discover the hidden gems of America with Netflights.com

CaliforniaNevadaUSA
Don’t know where to start? Inspire me...