With its glitzy, eye-catching architecture, Dubai is a place that very much seeks to impress. Nicknamed the City of Superlatives, it’s home to the world’s tallest building, biggest shopping mall, and largest performing fountain. Decadence, opulence and over-the-top luxury are very much its M.O. And the hotels in Dubai are no exception. These are five of the most impressive. 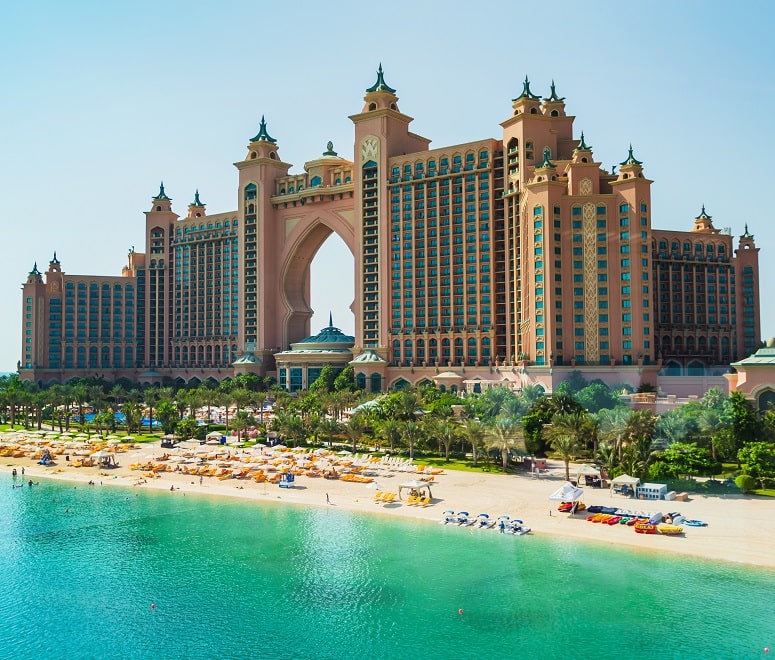 Of all the hotels in Dubai, Atlantis, the Palm is arguably the most famous. When it opened in 2008, it was the first resort on Dubai’s manmade Palm Jumeirah island. If you’ve got kids, and don’t mind forking out for a family holiday, it’s a great option.

Within the confines of the pink, palatial resort you’ll find a waterpark and an aquarium. Aquaventure Waterpark has over 30 slides and attractions, including a wave machine, shark lagoon, Dubai’s longest lazy river, and a 500-metre private beach. No less impressive, the Lost Chambers Aquarium is Dubai’s largest aquarium, home to 65,000 marine animals. You can also interact with sea lions and swim with dolphins at Dolphin Bay.

Away from the water, there’s a bowling alley, spa, and a whopping 11 restaurants – several of which have Michelin stars. Almost all of the 1,539 rooms at Atlantis, The Palm are interconnecting, and all have views of the Arabian Gulf, the Palm or the Dubai skyline. If you’re looking to make your holiday to Dubai extra special, why not book into one of the Underwater Suites? Spread over three levels, they have floor-to-ceiling windows which look directly into the Ambassador Lagoon aquarium, and come complete with a 24-hour private butler service.

FIVE Palm Jumeirah is one of the newest hotels in Dubai. Since it opened in March 2017, it’s proved a favourite with celebrities and influencers, and is the current place to see and be seen. The resort’s philosophy is based around the five elements of earth, water, fire, air and consciousness – hence the name.

Something of a party hotspot, it has a number of onsite bars and lounges, and even a nightclub. There are five swimming pools, one of which – the 60-metre Social Pool – plays host to a pool party every Friday. Burlesque dancers, DJs, and a poolside saxophonist provide the entertainment. The hotel’s enviable location at the base of Palm Jumeirah means it’s only a short drive to many of the city’s key attractions. You’re also perfectly placed to snap pictures of the Dubai skyline and Dubai Marina. For the best views, head up to The Penthouse – the hotel’s adults-only rooftop day club and evening lounge, on the 16th floor. 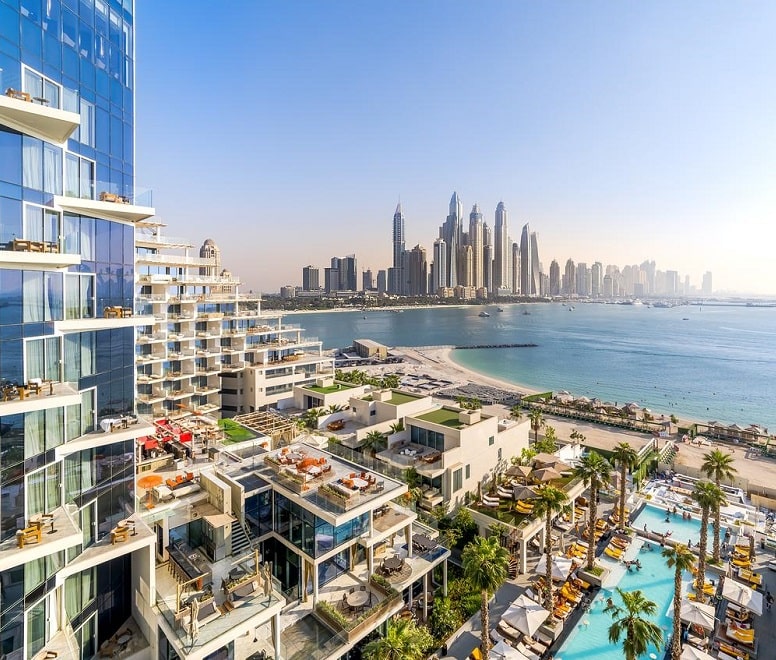 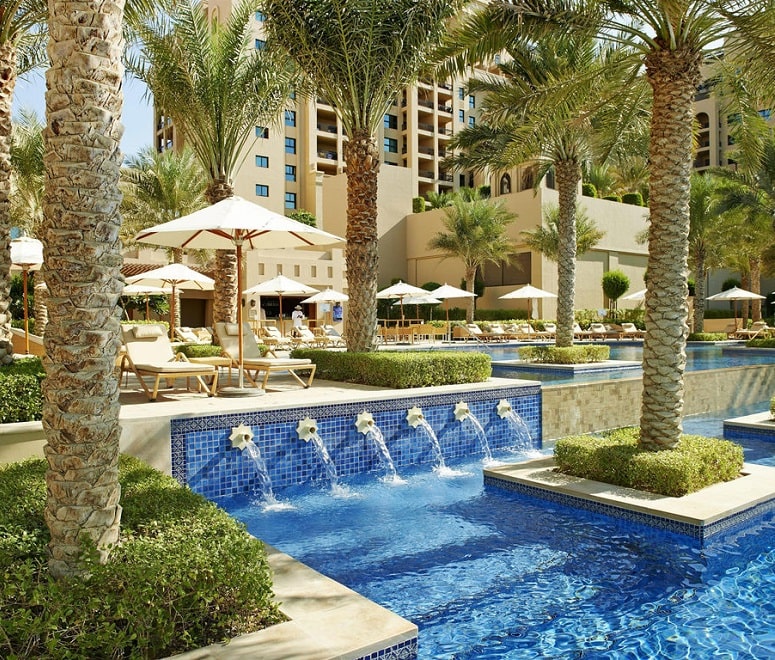 While certainly luxurious – it’s five-star after all – Fairmont The Palm is less ostentatious than many hotels in Dubai. Sitting on the west coast of Palm Jumeirah’s trunk, it’s an elegant hotel, displaying a contemporary take on classic Middle Eastern architecture. Besides an idyllic beachfront location, it offers lots of family-friendly facilities. The Fairmont Falcons Kids’ Club hosts a range of activities for children aged three to 16, from summer camps to cooking classes. And there’s even a set of steps at check-in which allows little ones to see over the counter.

For adults, there’s a fully equipped health club and a relaxing spa. There are also four swimming pools, an 800-metre private beach, watersports – including kayaking, paddle-boarding and sailing lessons – plus 11 restaurants and bars. The cuisines available will take you on a journey around the world, from Brazil to America, Japan and Korea.

The Burj Al Arab may not be the tallest building in Dubai – that honour goes to the Burj Khalifa – but it’s definitely the most iconic. Look at the Dubai skyline and its distinctive sail-shaped silhouette is instantly recognisable. Sitting on its own manmade island, just off Jumeirah Beach, it’s been called the world’s only seven-star hotel. While that’s factually incorrect – hotel ratings don’t go above five – it’s probably the most lavish of all the hotels in Dubai.

With 1,790 square metres of 24-carat gold leaf throughout, this hotel is literally lined with gold. It’s home to the largest Swarovski crystal ceiling in the world, where 21,000 crystals represent the Milky Way in an installation worth 1.3 million AED. The walls and floors, meanwhile, contain more than 30 different types of Statuario marble. That’s the same marble used by Michelangelo to create the statue of David.

There are no rooms at the Burj Al Arab, only suites. A stay here is always going to be pricey, but if you really want to flash the cash, consider one of the 8,000-square-foot Royal Suites. Accessed via private lift, each one features a library, cinema, dining room for up to 12 people, and two bedrooms. One bedroom even comes with a rotating bed! All guests – not just those staying in the Royal Suite – have the option of arriving at the hotel by either one of the world’s largest chauffeur-driven fleets of white Rolls-Royce Phantoms or by a dedicated helicopter transfer service. Casual.

There are 10 bars and restaurants at the Burj Al Arab. The food’s excellent at all of them – but the most theatrical is Al Mahara. A gold lift takes diners into this seafood restaurant, which fully embraces an under-the-sea-theme. Tables ring a 300,000-litre aquarium which houses sharks, eels and sting rays. Hotels in Dubai really love their aquariums! This one is manned by eight staff, including two marine biologists, who also run the hotel’s turtle hospital. (Yes, the Burj Al Arab has a turtle hospital, too.) 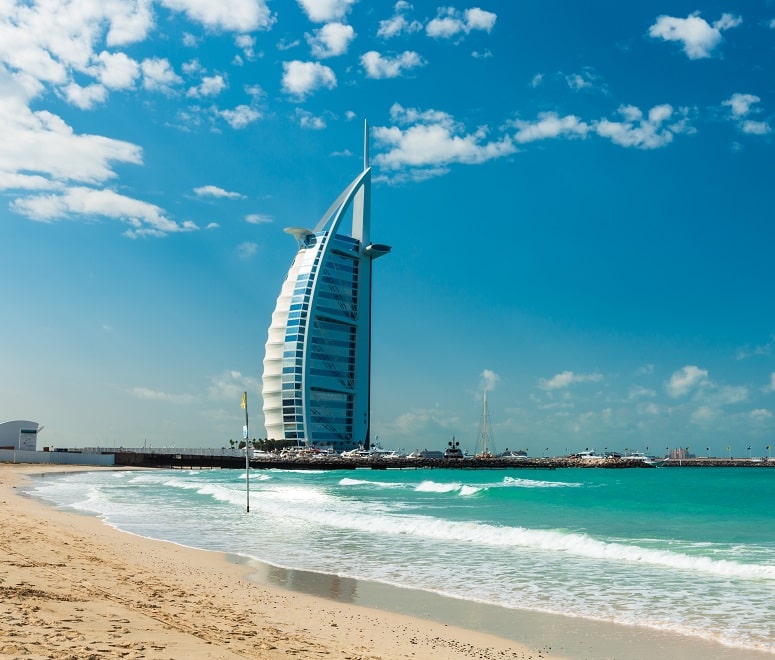 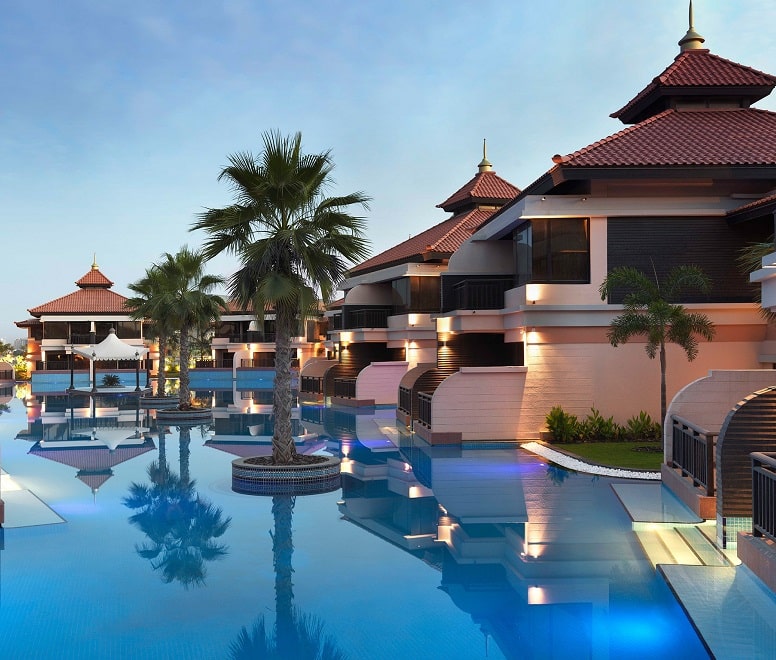 Can’t decide between a holiday to Dubai and a holiday to Thailand? Anantara The Palm Dubai offers the best of both worlds. A secluded resort on the crescent of Palm Jumeirah, it features the only over-water villas in the UAE. Other accommodation options include Lagoon Access Rooms, with steps straight into the pool, and Beach Pool Villas which come with a private infinity pool on a sea-facing terrace.

The resort pays homage to its location by serving Arabic coffee and shisha, but it also fully embraces its heritage and provides the Thai-style luxury Anantara resorts are known for. The architecture is inspired by Thai temples, with buildings clustered around three temperature-controlled lagoon pools. Thai-style floating market boats meander across the water, serving cocktails, and you can zip around the resort on chauffeur-driven tuk-tuks. And if you want to see more of Dubai, you can charter a cruise around the Palm Jumeirah archipelago aboard a traditional Thai long-tail boat. Pick-ups are from the Dubai Marina or the resort’s private jetty.

The whole resort is a tranquil retreat, but if you want to feel truly zen, check out the plush spa. Besides an extensive treatment menu, it has an aroma steam room, crystal and gemstone steam room and a salt-inhalation room. And just to throw another culture into the mix, it also offers Turkish hammam facilities for men, women and couples.

Take a look at our latest deals to find cheap flights to Dubai.

Or, if you’re dropping by en route to somewhere else, this is what to know and where to go during a stopover in Dubai.

DubaiHotelsUnited Arab Emirates
Don’t know where to start? Inspire me...