Six of the world’s strangest Christmas foods and traditions 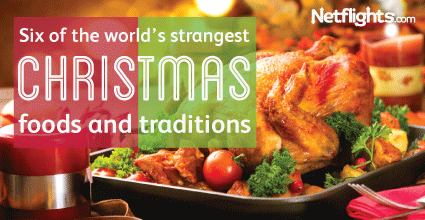 Six of the world’s strangest Christmas foods and traditions

How about an evil witch instead of Father Christmas, spiders instead of baubles and KFC instead of turkey?

These are 6 of the best, downright bizarre, Christmas traditions from around the world.

In parts of Spain, Portugal and Italy, the traditional nativity scene is joined by a caganer, which translates as ‘shitter’. The figurine is depicted with his trousers round his ankles, bare bottom hovering above a pile of poo; Charming.

Meanwhile, the Catalonian Christmas isn’t complete without a caga tió (defecating log). A small log is fed small treats until Christmas Eve, when the family beats up the log with sticks, at the same time as singing traditional songs, until the logs poohs out its treats; Yes, really.

Instead of Father Christmas, Italian kids wait for La Befana, a friendly witch who delivers sweets and toys on January 5th. Speaking of witches, Norwegians don’t dare clean their homes on Christmas Eve in case witches or evil spirits swipe their brooms.

Also, did you know that Greece sits atop a race of evil goblins, the Kallikantzaroi? According to Greek legend, the goblins surface to wreak havoc during the 12 days of Christmas. And spare a thought for the naughty kids of Austria, who are beaten with sticks by Krampus, the evil demon accomplice of Austria’s St Nicholas.

In a pleasing elaboration of our stocking tradition, shoes kick off the festive season in many countries. In Iceland, shoes left on the windowsills of children’s bedrooms are filled with treats every night of the 12 days of Christmas. This is the same country that’s terrorised by ‘Yule Cat, a crazed cat who attacks anyone who hasn’t got a new set of clothes by Christmas Eve.

Over in the Czech Republic, single women trust in their shoes to predict the success of their love life over the coming year; standing with their back to their front door, they hurl their shoe over their shoulder. If it lands with the toe pointing towards the door, they’ll be married in a year. In Belgium and The Netherlands, presents arrive on December 6th, St Nicholas Day. Children leave their shoes and a present in front of the fireplace for Sinterklaas. If the children have been good, Sinterklaas’ assistant Zwarte Piet (Black Peter) will leave presents in and around the shoes. If bad, Zwarte Piet will bundle them into his sack and take them away.

Instead of being a religious festival and a bank holiday, Christmas in Japan, where only 1% of the population is Christian, is a highly commercialised and non-religious event, heavy on the dinners, decorations and gifts. And thanks to the incredibly successful ‘Kurisumasu ni wa kentakkii!’ (Kentucky for Christmas) marketing campaign in 1974, KFC is at the heart of it. In fact, a bucket of ‘Christmas Chicken’ is so popular that queues of two hours aren’t unusual. Some people even order their boxes of ‘finger lickin’ Christmas cheer months in advance.

In Ukraine, legend has it that when a poor widow with more kids than history can keep track of, couldn’t afford to decorate the fir tree outside her house, a spider wove a silvery web across the tree for her. The family awoke on Christmas Day to a tree that shimmered and sparkled in the dawn light. Consequently, fake glittery spiders and webs sit alongside tinsel and baubles on Ukrainian trees.

Think sprouts are bad? Spare a thought for the folks in Greenland who treat themselves to mattak (whale skin with a strip of blubber inside) and kiviak; whole raw auks (a type of small bird) buried in a seal skin for up to 18 months to ferment. Yum.

Around the worldChristmasFoodie holidaysJapanTokyo
Don’t know where to start? Inspire me...