Blockbuster movies set in far-away lands or especially scenic locations can stir up a burning desire to travel and broaden one’s horizons. Gathered here are some of the best holiday destinations that have been featured on the silver screen in recent years. 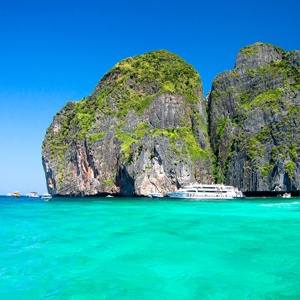 Barcelona is a gorgeous city, and it was brilliantly shown in Woody Allen’s film, Vicky Cristina Barcelona. One of the biggest draw-cards for tourism in Barcelona is the incredible architecture of Antoni Gaudi, and buildings such as the Casa Mila and the Sagrada Familia, as seen in the movie, are just as glorious in real life. Park Güell, also the work of Antoni Gaudi, is also featured in the movie. Originally planned as a housing development, it’s now a beautiful park that features some of the most whimsical of Gaudi’s works.

The Girl with the Dragon Tattoo

Nominated for five academy awards, the film adaptation of Stieg Larsson’s novel was filmed in the beautiful Swedish capital city of Stockholm. Prominent parts of the city you might recognize from the film are the Mariatorget district and the Stockholm Courthouse. While visiting Sweden, you may also want to check out the Hofsta Sateri, which served in the film as the Vanger compound. This is a 700-year-old estate that lies about 140 kilometres outside Stockholm. Several scenes in the film were also shot in Oslo, Norway and Zurich, Switzerland – two other beautiful and historical European cities to visit.

This dark comedy follows two hit men who are sent to the beautiful and historical city of Bruges, in Belgium. The character Ken, who’s played by Brendan Gleeson, falls in love with the city and all there is to see and do there, and we guarantee that you will, too! For locations you may remember from the movie, head to the Belfort, a 250-foot high belfry that towers over the otherwise small city.

Follow in the footsteps of Julia, who’s played by Kate Winslet, as she travels to Morocco. The film starts in Marrakesh, which is an ideal spot to start your Moroccan adventure too. While you’re there check out the Djemaa El Fna, Marrakesh’s main marketplace, with its throngs of people and its array of spices, carpets and foods. The scenes in the movie that depict Djemaa El Fna were actually filmed in Oumnast, a historic Kasbah just outside of Marrakesh; also well worth a visit for those with a taste for the historical.

Although the film may paint a rather dreary picture of life in Tokyo, your visit need not be as depressing as that of Bob Harris, played in the film by Bill Murray. He stays in the Park Hyatt hotel, one the city’s most luxurious. For the cinephiles out there, head to the 52nd floor of the hotel to the New York bar, which you’ll recognise from the film. In addition, Tokyo features a unique blend of high-tech, innovative buildings and skyscrapers, Buddhist temples, older suburbs and markets, and refreshingly beautiful parks, making it one of the most fascinating cities in the world.

The Lord of the Rings

Peter Jackson’s adaptation of JRR Tolkien’s epic fantasy is set entirely in his home country, New Zealand. Most of the film was shot in the country’s expansive national parks and conservation areas, so don’t expect to get much from a one-day tour – you’ll have to set out on your own quest to find Middle Earth in the mountains of this beautiful country. For those looking for scene-specific locations, New Zealand’s highest mountain peak, Aoraki Mt Cook, was shot as the Misty Mountains of Middle Earth, while the Tongariro National Park was transformed into Mordor.

The adaption of the novel The Beach was a blockbuster success, and it’s arguable whether Leonardo di Caprio or the island of Ko Phi Phi Le in Thailand was the movie’s biggest star. Visitors to Krabi or Phuket can reach the island by boat. Visit the beautiful Maya Bay, surrounded by 100-metre high cliffs, to recreate the shark-punching scene – but don’t worry, the only sea-life you’re likely to encounter in this crystalline bay is beautiful and harmless.