Walking with dinosaurs Down Under 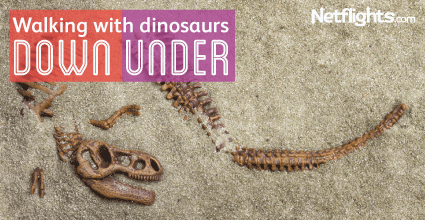 A vast country with huge areas that remain undiscovered, Australia’s dinosaur trail is ever-evolving. New finds are constantly being made, enhancing the existing opportunities to walk with dinosaurs Down Under.

Australia was part of the Gondwana supercontinent that existed hundreds of millions of years ago; encompassing most of the land we now class as the Southern Hemisphere, including Africa, Antarctica, South America and the Aussie continent. Discoveries in Oz were quite sparse until more recent years, with a significant number coming in the 1980s and 90s.

One such find in the 90s came courtesy of opal miners in Lightning Ridge, an outback town on the border of New South Wales and Queensland. It was only in 2015 that the find was revealed to have uncovered a new dinosaur that’s been described as the ‘biggest, baddest meat-eater yet found Down Under’.

Dubbed ‘Lightning Claw’ due to the location of the find, and the giant claw that forms part of the fossil, the dinosaur is believed to have been around 7m long, making it the biggest carnivore known in Australia. At 110 million years old, Lightning Claw is believed to have originated in Oz before going forth and prospering, successfully colonising other parts of the supercontinent.

The dinosaurs that walked Australia’s land are not very well known – Lightning Claw is the second most complete carnivore, while there are only around 17 well-defined species. There is however an interesting Dinosaur Trail that can be found in the outback of Queensland, linking the towns of Longreach, Richmond, Hughenden and Winton.

One of Australia’s most prominent dinosaur spots, Winton, offers the opportunity to visit the Australian Age of Dinosaurs Museum of Natural History, which has a wonderful collection of fossils that includes famous Australovenator and Diamantinasaurus examples. To the southwest of Winton you’ll find the Dinosaur Stampede at Lark Quarry Conservation Park, described as the world’s only evidence of such an event.

Some 450 miles south of Winton, Eromanga boasts the largest dinosaurs in Australia, with a monstrous Titanosaur named Cooper; the biggest dinosaur ever discovered among the finds that only started in 2004. Estimated to have been almost 30 metres in length, and weighing 30 to 40 tonnes, you can check out the Eromanga Natural History Museum to learn more about Cooper, and his buddies, such as George; who has the potential to be an even bigger specimen.

There are a number of other great museums featuring dinosaur exhibitions across Australia, including the National Dinosaur Museum in Canberra, and Victoria’s Melbourne Museum. If you’re all about the visuals, head to Palmersaurus, labelled the world’s largest dinosaur park; full of around 160 life-sized beasts that are even able to move.

No matter how you walk the paths laid out by the wonderful creatures millions of years ago, Australia’s ever-improving dinosaur trail is full of intrigue.

AustraliaQueenslandSouth Wales
Don’t know where to start? Inspire me...