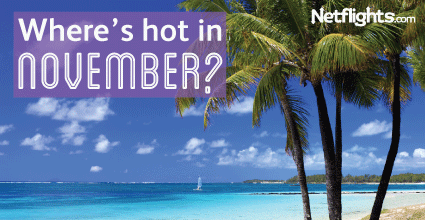 Beat the onset of the winter blues this November and fly away to warmer climes.

With an average high of 31ºC during November, it’s hard to find better weather to escape to than that of Ras al Khaimah (RAK).

The most northerly emirate in the United Arab Emirates, RAK is home to the Khatt Springs, a little oasis in this arid area of the world, and several crumbling old forts, such as the 16th-century hilltop Dhayah Fort. The rugged Hajar Mountains, where hiking is possible, provide the scenic backdrop.

For local food, try Al Sahari, where you can dine on kebabs and fried seafood – men sit on the right-hand side of the restaurant, women and families on the left. In RAK Popular Café, which overlooks the lagoon, the locals play backgammon and smoke sheesha throughout the evening.

The climate of Queensland, the northeastern ‘Sunshine State’ of Australia, varies from the north to the south. In the south, November is when the weather is at its hottest and sunniest, with an average high of 31ºC.

Brisbane is the entry point for southern Queensland. Chill in the parklands on the South Bank or head to one of the many cool cafés, bars or restaurants, such as the Gunshop Café (which used to be – you guessed it – a gun shop) or George’s Seafood for some Moreton Bay rock oysters and fresh mud crabs.

Further out is the Lone Pine Koala Sanctuary for that all-important koala snap and the beaches of the Gold Coast and the Sunshine Coast. Fraser Island, the largest sand island in the world, makes a fun weekend getaway, and November is the last chance to spot humpback whales breaching in nearby Hervey Bay.

Within easy reach of the UK, the Canary Islands are the perfect winter sun destination. The island of Tenerife receives an average high of 21°C throughout November with eight hours of sunshine a day.

The obvious attractions are the beaches. Try Playa de las Canteras on Gran Caneria – one of the most beautiful beaches in the world – for sunbathing, snorkelling or cycling, or the family-friendly La Concha beach on Fuerteventura.

Tenerife’s Fiesta de San Andres is celebrated on 29th November, which involves sledding in the streets and children running through the towns dragging strings of soft drink cans, creating quite a din! While watching the celebrations, you can snack on roasted chestnuts and sip the local vino del pais.

November is the start of summer in Mauritius and a great time to visit. The average high for the month is 24°C, with a minimum of six hours of sunshine a day.

In the colonial-style capital Port Louis, you can visit the Natural History Museum and see one of the rarest stamps in the world at the Blue Penny Museum. If you fancy something a little more fast-paced, take an adrenaline-fuelled quad bike tour into the Moka Mountains.

Offering epic surfing, sleek bars and restaurants, and a laidback beach scene, Bali is tropically hot all year round, with an average high of 33°C in November, which is just before the island’s rainy season.

Seminyak is where the best restaurants and bars can be found, such as super-cool Sardine, which is set by a paddy field and feels a world away from the bustle of the town. Jimbaran beach is one of the best beaches on the island, with gentle surf for bodyboarding or just splashing around.

In the centre of the island, charming Ubud is a popular town from which to discover Bali’s stunning rice paddies and numerous temples.

BrisbaneNovemberQueenslandWhere is hot
Don’t know where to start? Inspire me...