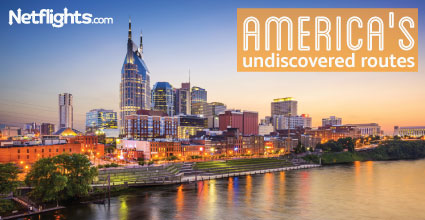 America is the home of the road trip – and heading down Route 66 is one of those classic travel experiences atop thousands of bucket lists. But why not get away from the crowds and check out one of America’s lesser-known driving routes. Each has its own special attractions; whether that’s stunning scenery, great food or a fascinating history. Here are five of America’s best undiscovered routes.

Running from Nashville, Tennessee to New Orleans, Louisiana, Route 61 goes right through the musical heartland of America. Along the 650-mile route you’ll pass the homes of legendary musicians, classic music venues and recording studios, as well as current musical hotspots. The type of music changes as you travel – country in Nashville, soul in Memphis, blues in Tunica Mississippi, and finally jazz in New Orleans. It’s not just about the music though – don’t forget to stop for some good Southern food, like pulled pork or beignets, along the way.

Passing some of the USA’s most dramatic scenery, the 300-mile-long Hawaii Belt forms a circle around the Big Island. It starts at Kailua-Kona, a town surrounded by hardened lava flows, and passes through jungle, farmland, beaches and volcanoes as you loop around the island. Stop off at a viewpoint overlooking the deserted Waipio Valley, watch new land being formed at Volcanoes National Park and taste local coffee at Kona Coffee Living History Farm. You’ll also find remnants of ancient Polynesian history mixed with modern Hawaiian culture.

The Seward Highway is a 125-mile stretch of Alaska’s Route 1, running between Anchorage and Seward. The drive takes you 1,000 feet up into the mountains and back down to sea level, with glaciers, lakes, forests, fjords and waterfalls along the way. Keep an eye out for beluga whales off the coast as you travel, as well as other native wildlife like eagles and moose. The Kenai Peninsula is gold mining country; you can try your hand at panning for gold at Crow Creek Mine, and find out more about the tough life of a miner in the historic town of Sunrise.

Only 51 miles long, the Patchwork Parkway in Utah packs a lot into a small area. This was the route taken by early American pioneers, and gets its name from the quilts they used to lay down, to stop their feet freezing as they travelled in winter. Today it’s a breath-taking landscape of red rocks, canyons, cliffs and plateaus. At 10,500 feet high, the views will take your breath away in more ways than one. From Brian Head Peak you can see 100 miles in each direction, from Bryce Canyon National Park one way to Zion National Park in the other.

There might not be much to see along the 98 mile-long stretch of desolate desert of Extraterrestrial Highway; but there’s a chance that if you do, it’ll be out of this world. Home to alleged UFO crash site Roswell and top secret ‘Area 51’, the area is a hotbed of alien encounters and conspiracy theories. If you don’t spot a UFO there’s plenty of alien-related kitsch to see in the route’s only town, Rachel; grab an alien burger at the Little A’Le’Inn, and keep an eye out for little grey men.

USA car hire is cheap when you book in advance with Netflights.com

Adventure holidaysNevadaRoad tripsUSA
Don’t know where to start? Inspire me...