Next Tuesday is Shrove Tuesday – AKA Pancake Day. In the UK, we eat both sweet and savoury versions, but the classic topping is sugar and lemon. Nice and simple! However, other places in the world have their own take on this tasty treat. Wherever you go, you’re likely to find some version of the humble pancake, just with a specific cultural twist. It’s hard to narrow it down and pick the very best ones – but we’ve given it a go. These are the countries we think have pancakes worth travelling for.

You can’t possibly make a list of the world’s best pancakes and not include France. Crêpes are unavoidable throughout the country. There are two main types of French crêpes – sweet ones (crêpes sucrées) and savoury ones (crêpes salées). Savoury crêpes are commonly known as ‘galettes’. While sweet crêpes are made using wheat flour, galettes are made with buckwheat – which is great news if you’re gluten free. They can be topped with just about anything, but popular choices include eggs, ham, mushrooms and cheese (obviously – this is France after all!).

The pancakes you get across the pond are far thicker and spongier than the kind we have back home. Sometimes called hotcakes, griddlecakes or flapjacks, they’re a very popular brunch food. You’ll find them on the menu at just about every diner across North America. Made using buttermilk (hence the name), they’re gloriously fluffy and far lighter than they appear. They usually come in a towering stack, doused in maple syrup, and are commonly served with crispy bacon.

Thailand’s famous for its incredible food – it’s one of the things that makes it such a great holiday destination. Practically everywhere you go, you’ll find countless street-food vendors selling all manner of delicious dishes, with roti being the most popular sweet treat. A kind of crispy pancake, it’s cut into small squares, drizzled with condensed milk and sprinkled with sugar. So be prepared for a sugar rush! Some sellers add fillings as well. Banana’s the most popular, but you can also find roti with apples, chocolate sauce or Nutella. 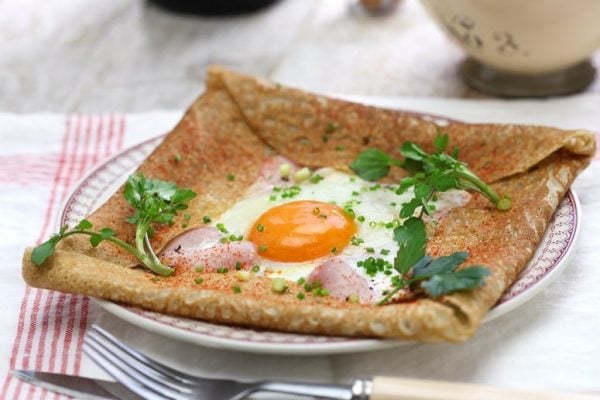 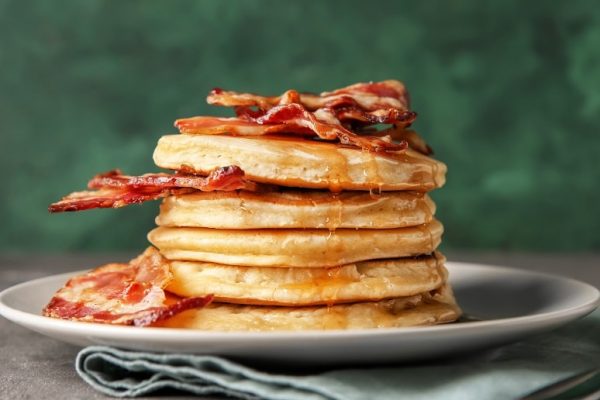 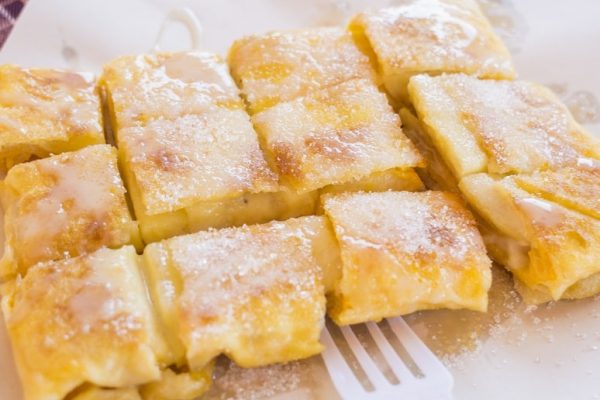 Dosas are a staple throughout South India. Traditionally a breakfast food, they’re made using a ground rice and lentil batter. This is poured on a flat pan and cooked until one side becomes crisp and brown, while the other remains soft and sponge-like. Dosas can either be served as they are, alongside chutneys and sambar – a lentil-based vegetable stew – or stuffed with filling. Masala dosa, which contains spiced potato, is the most common kind of filled dosa.

Made from fermented rice and coconut milk, lacy, bowl-shaped hoppers are Sri Lanka’s answer to pancakes. They’re cooked in a traditional pan, called an appachatti, and sometimes come with a whole egg baked into the base. Rather than being topped with lemon and sugar, or Nutella, they’re filled with delicately spiced kari (the Sri Lankan word for curry). What makes hoppers so tasty is their combination of textures – crisp at the edge, but doughy in the centre.

Apam balik is a sweet pancake turnover sold at roadside stalls throughout Malaysia. If you have more than one you’ll find the thickness varies, as some people make them thin and crispy while others prefer them thick and fluffy. Apam balik’s traditionally filled with a mixture of roasted peanuts, sugar and creamy corn. However, these days you can buy them with a variety of sweet and even savoury fillings. This pancake-like creation’s also found in other parts of Asia, such as Singapore, Indonesia and Brunei. 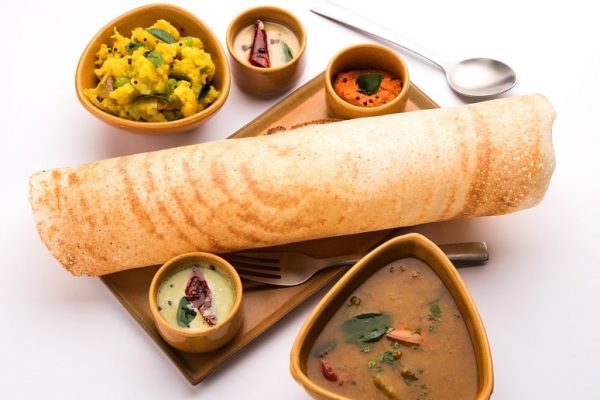 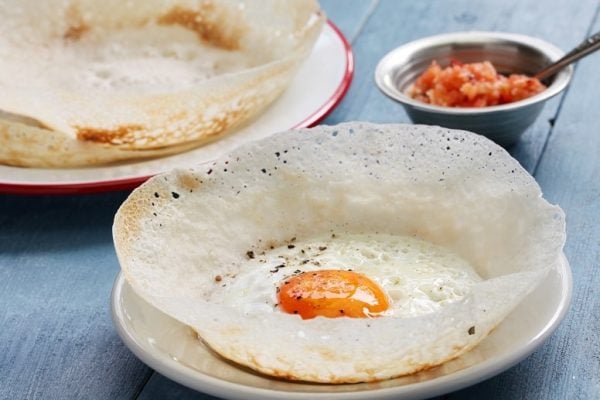 These buckwheat pancakes are one of the most commonly consumed dishes in Russia. The perfect accompaniment to sour cream, caviar and smoked fish, blinis come in a variety of sizes – from bite-sized canapés to jumbo show-stoppers. Over the past few decades, the smaller versions have become a regular fixture at British cocktail parties – particularly during the festive period.

Large, pan-sized pannekoeken are much thinner than American-style pancakes, but still thicker than crêpes. They’re made from a simple batter of eggs, milk, flour and salt. Traditionally, it also included buckwheat, but contemporary recipes tend to omit this ingredient. People make pannekoeken with a whole range of sweet and savoury fillings, and eat them for breakfast, lunch or dinner. They can also be served with toppings such as stroop (Dutch syrup), molasses, apple butter or powdered sugar. Just don’t confuse pannekoeken with the baby Dutch pancakes popular in the States. They’re actually not from the Netherlands at all. The ‘Dutch’ in their name refers to the German-American community known as the Pennsylvania Dutch.

It may not be as well known in the West as other Japanese food, like sushi and ramen, but okonomiyaki is no less tasty. It loosely translates to “what you like, grilled” – and while the batter is always mixed with shredded cabbage, as the name suggests, the rest of the ingredients are up to you. Prawns, octopus and pork are all common choices, but it generally comes down to whatever’s at hand. The dish originated in Osaka and Hiroshima – each of which have their own style of okonomiyaki – but it’s now popular throughout Japan. These days, you’ll find specialised okonomiyaki restaurants all over the country. 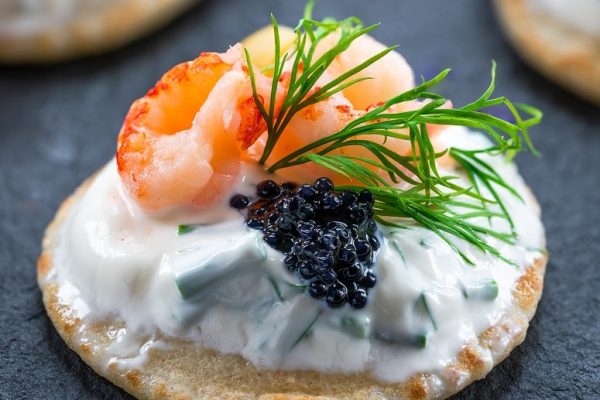 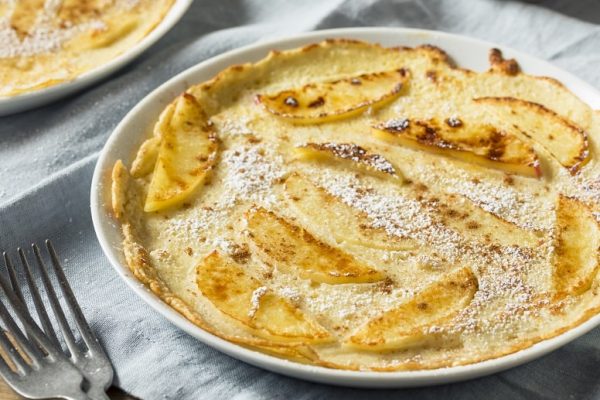 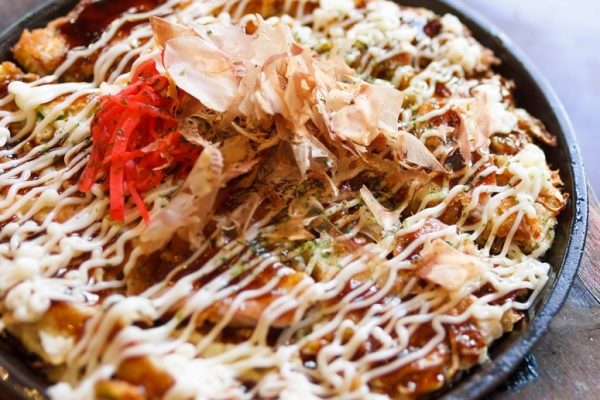 Fancy a culinary adventure abroad? Bag a bargain with Netflights.

And if you want to make your trip as stress-free as possible, download the best travel apps for an easy holiday.