Come fly to Thailand with Netflights

We're not surprised you're searching for cheap flights to Thailand. This country is fascinating. Known for its natural beauty, delicious food and friendly locals, Thailand offers an enormous variety of things to see and do. You can visit lush national parks, discover exotic wildlife, and enjoy some of the best snorkelling in the world. The people are friendly and sincere, the cuisine is filled with flavour, and the beaches are beautiful. Whether you fly to Bangkok, Phuket or Chiang Mai, a holiday to Thailand will treat you to all sorts of riches.

Key facts about Thailand be in the know

7 hrs ahead of GMT

Most popular airports to fly into in Thailand

Points of entry in Thailand

touchdown in a country nearby
Indonesia
cheap flights to Bali

How much is it to fly to Thailand?

Which airports fly to Thailand?

You can fly to Thailand from any of these UK airports.

It's best to book this far in advance if you want cheap flights to Thailand.

These airlines usually offer the cheapest flights to Thailand.

What airlines fly direct to Thailand?

These airlines fly straight to Thailand without stopping.

You can fly to Thailand with these airlines, but you'll have at least one layover.

Flights to Thailand are generally cheaper at this time of year. Or you could get a deal by booking your flight last minute.

This is the most popular time of year to visit Thailand, so flights are more expensive.

How long should I stay in Thailand?

On average, people spend this amount of time in Thailand.

How long is the flight to Thailand?

The shortest flight is from London Heathrow (LHR) to Bangkok (BKK) with EVA Air, but other routes may take longer.

What you need to know before flying to Thailand

It is easier than ever to find cheap flights to Thailand, leaving more of your hard-earned cash for the holiday of a lifetime. Whether you choose to visit the hill tribes of the north, engage with elephants at one of the country's most reputable sanctuaries, or go island-hopping in the south, you'll have a great time. And, with plenty of direct flights to Thailand available from the UK, you can be there in just half a day.

When is the cheapest time to fly to Thailand?

Thailand is unique in that it can be a budget or luxury holiday destination. Thankfully, it's easy to mix-and-match budget with luxury – you can book cheap flights and then unwind in a knockout hotel. Flights are cheapest in August, but this in the heart of the Thailand's wet season. For the best deal – at a time when you'll have good weather – try to fly to Thailand in May, as ticket prices often go down as much as 20% in this month, compared to other times of the year. This shoulder period is considered off-peak tourist season, because the weather turns humid, but for some travellers the heat can be very welcome. Look out for midweek flights too – Monday is often the cheapest day to fly to Thailand.

When is the best time to book flights to Thailand?

If you want cheap flights to Thailand, it's best to book about three months in advance. You're unlikely to find a better price before then. You could hedge your bets and try to find a last-minute deal, but it's important to keep in mind that flights from London Heathrow to Thailand often increase in price closer to departure. So booking last minute can be risky.

Which airlines fly to Thailand?

For cheap direct flights to Thailand, we'd recommend flying with British Airways, EVA Air or Thai Airways. If you want to keep the costs down even more, compare prices of an indirect flight with Turkish Airlines, KLM, Cathay Pacific, Etihad or Emirates. With a stopover in cities like Istanbul, Amsterdam or Dubai, an indirect flight can be a fun way to break up your journey. While most airlines fly into Suvarnabhumi Airport in Bangkok, it's also possible to fly straight to Phuket. So, if you prefer, you can skip the capital and head straight to the beach.

How long does it take to fly from the UK to Thailand?

A direct flight from London to Bangkok usually takes 11.5 hours. Cheap flights with layovers can take up to 24 hours, but this also gives you the chance to stretch your legs and explore another city.

Thailand has four main airports: two in Bangkok, one in Chiang Mai in the north, and one in the south, Phuket. Several international airlines fly directly to these airports, which means there's ample opportunity to avoid a stopover. You can then book a domestic flight on to places like Koh Samui or Krabi, if you wish.

Bangkok's newest airport opened in 2006 to replace the older Don Mueang International Airport (DMK). It's the primary airport for international arrivals and departures in Thailand, and serves as a hub for much of Southeast Asia. Although there's just one terminal, Bangkok's airport has many concourses – so be sure to check a map to find your way around it. Most return flights to Thailand from the UK land here.

There are two terminals at Bangkok's other airport, which is located 15 miles north of the city. As this is the primary airport for budget airlines, this might be the best place to head to, if you're looking for a cheap domestic flight to another Thai airport, like Koh Samui. Luckily, transferring between the international and domestic flights is simple and hassle-free.

This airport is just north of Chiang Mai, making travel into the city relatively painless. Some flights to Thailand from the UK go directly to this city, allowing you to visit the area's famous elephants in no time at all. Domestic and international arrivals are split by terminal, but navigating this recently renovated airport is simple. You can choose to start your holiday in Chiang Mai, or fly Chiang Mai straight down to Koh Samui.

Flying into Phuket International Airport is delightful, as the airport is located behind the stunning Mai Khao Beach. Limestone islands dot the azure sea, giving you a glmipse of what's in store on your holiday. Phuket Airport is also an important hub for travel to and from the Gulf Islands, as well as other destinations in Southeast Asia.

On arrival and getting around the airports

Getting to the cities from the airports

Thailand's public transit system is a great option to save money when travelling to your hotel. Suvarnabhumi Airport (BKK) is reachable by free shuttle, air-conditioned bus or taxi. For cyclists, there is a bicycle lane to the airport as well. Chiang Mai International Airport (CNX) and Phuket International Airport (HKT) are easiest to reach by using the Thailand’s ubiquitous tuk-tuks.

The country's capital Bangkok boasts attractions of value, including the spectacular Grand Palace, formerly the home of the monarch, but still to this day considered the spiritual heart of the Thai Kingdom. The temple of Wat Arun is another must see, which despite translating as 'Temple of Dawn', is stunning at sunset. Close to Bangkok you will find the floating markets, where you can purchase tropical fruits and vegetables, fresh coconut juice, and local food cooked on the river in floating kitchens.

You will no doubt wish to head away from the bustle of the capital, and explore the multitude of beautiful islands that Thailand has to offer. The Phi Phi Islands, Similan Islands and the Phang Nga province are all great destinations. The less-renowned Ko Tarutao is located in the Tarutao National Marine Park archipelago, and boasts sea turtles, whales, monitor lizards and crab-eating macaques. The snorkelling may not be as epic as elsewhere, but the beaches, waterfalls, hiking and wildlife make up for that.

Travelling to Thailand is relatively straightforward for British citizens. Arriving by air or by land, British passport holders can enter the country for up to 30 days without a visa. This visa exemption can then be extended for another 30 days once in the country, meaning that you can take your time exploring this marvellous place. However, keep in mind that all visitors must provide proof of onward travel, or they may be refused entry. 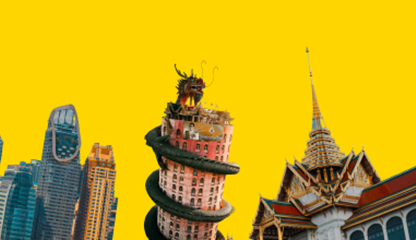 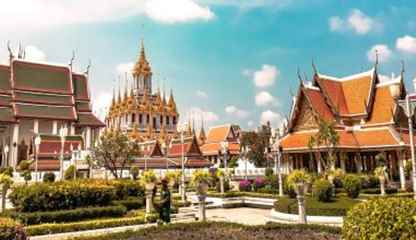 When is the best time to visit Bangkok? 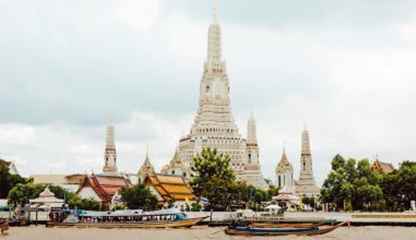 What to expect on your first trip to Bangkok