Come fly to Russia with Netflights

Russia is vast. From the grand cities of European Russia to the mountainous Ural region, from the balmy south to frigid Siberia, Mother Russia stretches over impossible distances. Are you seeking art and architecture, unspoilt landscapes to traverse or a multi-cultural experience? Then find cheap flights to Russia on Netflights and get ready for the trip of a lifetime.

Key facts about Russia be in the know

Most popular airports to fly into in Russia

Points of entry in Russia

How much is it to fly to Russia?

Which airports fly to Russia?

You can fly to Russia from any of these UK airports.

It's best to book this far in advance if you want cheap flights to Russia.

These airlines usually offer the cheapest flights to Russia.

What airlines fly direct to Russia?

These airlines fly straight to Russia without stopping.

You can fly to Russia with these airlines, but you'll have at least one layover.

Flights to Russia are generally cheaper at this time of year. Or you could get a deal by booking your flight last minute.

This is the most popular time of year to visit Russia, so flights are more expensive.

How long should I stay in Russia?

On average, people spend this amount of time in Russia.

How long is the flight to Russia?

What you need to know before flying to Russia

Moscow and the former capital, St. Petersburg, are world-class destinations. These two cities are famous for their architecture and are home to some of the best galleries and museums on the planet. Moscow’s candy-coloured domed edifices, the Kremlin and iconic Red Square are only the tip of its cultural iceberg. St. Petersburg, on the other hand, is bursting at the seams with art, culture and grandeur. This is particularly true in June, during the White Nights, a midsummer celebration with all-night lights, festivals and open-air concerts.

Mother Russia’s great outdoors are second to none. Adventurous travellers can choose from an almost endless variety of landscapes to explore. View endless birch forests from the windows of the Trans-Siberian Express, hike around the shores of the legendary Lake Baikal, soak up the sun at a Black Coast beach or trek through snowy peaks in the Caucasus Mountains. Don’t forget about the scenic drama of Kamchatka, easily one of the most wild and beautiful places on earth.

Modern Russia is a fascinating place. Its modern dynamism and mind-boggling history is worn on its sleeve in endless paradoxes. From the trendy eateries of Soci and the surrounding ‘Russian Riviera’ to the communist memories reverberating from gritty, grey buildings of that era, Russia is awash with stark contrasts. It may not be possible to see everything that makes up this country’s complex character in one trip, but start looking for cheap flights to Russia to at least start exploring.

Because of its size, Russia’s climate varies greatly from region to region. In general, the Russian summer (June to September) is when the weather is warm, dry and tourist-friendly. It’s also when Russians are taking their summer holidays, so expect prices to be higher. Try to book both your regional travel and your international flights to Russia in advance.

The shoulder seasons can be great times to visit Russia for certain activities. May and October offer mild weather. Crowds thin out during these months, and prices remain moderately cheap. The Victory Day Parade on 9th May is one of the main events in Russia’s packed calendar of cultural festivals.

Starting in November, the temperatures start to fall. Prices tend to be lowest between November and April, so you can easily pick up bargain flights during these months. It’s a great time to visit the museums and galleries of the main cities. Snowsports are also in full swing in January, so you can expect prices to be high.

Moscow and St. Petersburg are two of the main destinations for flights from the United Kingdom (UK). In Moscow, there are three airports: Sheremetyevo International Airport (served by Aeroflot from London Gatwick), Domodedovo International Airport, (British Airways from London Heathrow) and Vnukovo Airport (no flights from the UK at this time). Pulkovo Airport serves St. Petersburg, with flights from British Airways departing from London Heathrow. The airports in Rostov-on-Don, Irkutsk or Yekaterinburg, are also good regional options. 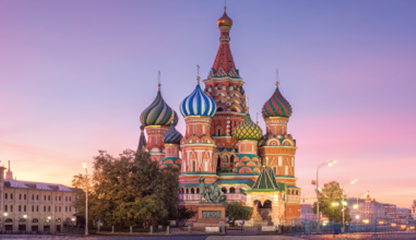