Everything you need to know about Holi Festival 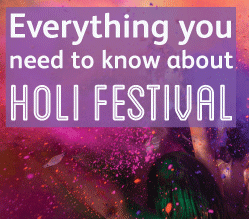 One of India’s most exuberant festivals, Holi is a joyous riot of colour where people shake off the gloom of the winter months and celebrate the coming of spring, the victory of good over evil, and a message of love and peace. Holi takes place the day after the last full moon in the Hindu month of Phalguna. This is usually during February or March – with this year’s festival taking place on the March 24th.

Holi is Hindu festival mainly celebrated in India and Nepal. The biggest celebrations take place in Northern India in cities like Delhi, Mumbai and Varanasi, or if you head to Mathura in Utter Pradesh, their Holi festivities stretch out for a full 16 days. Holi is also celebrated in other areas that are home to lots of Indians or Hindus, with smaller scale versions taking place in cities like London. But for the full experience you really need to head to India.

What is the story behind Holi?

Holi started off as a festival of springtime fertility, but has incorporated Hindu legends. The main one is the story of Prahlada. He was the son of the evil, power-hungry King Hiranyakashipu, who wanted the whole kingdom to worship him. But Prahlada became a devotee of the Hindu god Vishnu instead. His father didn’t approve so decided to punish him by getting his sister Holika, who was immune to fire, to trick her nephew into sitting in a flaming bonfire. But because she was using her powers for evil, the Gods reversed Holika’s powers and she was burnt to ashes while Prahlad emerged from the fire unharmed.

How do people celebrate?

Bonfires are still a big part of the Holi celebrations, and the night before it starts people gather around the fire to dance, sing and party. While this happens, they burn an effigy of Holika and throw roasting grains, popcorn, coconut and chickpeas onto the fire.

The next morning the party takes to the streets where things start to get colourful, symbolising the flickering colours of Prahlad’s bonfire and the new colours of spring. People chase each other with brightly coloured dried powders in shades of peacock blue, vivid pink and burnt orange. Or they fill balloons and water pistols with colourful water ready to accost passers-by.

Any open space like a park, street or courtyard is a potential arena for the games and anyone is a potential victim, whether they’re rich or poor, male or female, old or young. As the saying goes, “bura na mano, Holi hai” or “Don’t be offended, it’s Holi!”. Though in Barsana in Uttar Pradesh the women get their own back, as they are allowed to beat the men who chase them with sticks.

Alongside the water fights there are groups playing drums, and other musical instruments, who travel from place to place singing and dancing.

What do they eat and drink?

Holi’s food is all about awakening the senses and celebrating the upcoming spring. Favourite delicacies vary from family to family, but you’ll often find gujiya, a type of sweet dumpling that looks like a mini Cornish pasty and is filled with khoya (dried milk) and dried fruit, before being dipped in sugary syrup. Or phirni, a creamy rice pudding flavoured with saffron and cardamom, and puran poli, a sweet, buttery flatbread filled with lentils cooked in sugar, cardamom, saffron and nutmeg. It’s all washed down with plenty of thandai, a creamy milk drink that’s traditionally given an extra kick from bhang or cannabis leaves.

So head to India this year and experience the Holi Festival the way you were supposed to.

FestivalsIndia
Don’t know where to start? Inspire me...