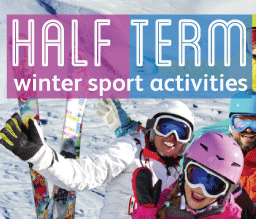 With stunning mountain scenery mixed with a dash of adrenalin, a winter sport holiday makes for an exciting family escape. February half term is the perfect time to get out in the snow and try out some of the activities on offer. Here are five great trips you can take with the family this half term.

The French Alps are home to a bewildering range of ski resorts, but a good choice for families is Avoriaz. It’s the highest part of the Portes du Soleil ski area so gets the best of the snow. There are no cars in the resort, so instead you transfer to your accommodation by horse-drawn sleigh. The resort has a dedicated children’s village called the Village des Enfants. It has gentle slopes and games for kids aged three and over, as well as group lessons for older children. Off the slopes there’s the Aquariaz waterpark with its indoor and outdoor pools, river and water cannons.

If you prefer to board, one of the best places to learn is the Swiss resort of Laax. Laax has four snowparks as well as Europe’s only indoor freestyle school, which hosts a weekly ‘Flying Ants’ session for under 6s, and a Freestyle Academy for older kids. There’s a Snow Wonderland ski school for younger children, led by magician Ami Sabi who tells stories and songs about the mountains, animals and forest in between lessons. There’s also a dedicated beginners area, and a snow park with one of the largest half pipes in the Alps, as well as jumps and obstacles.

If you want to get more remote, head into the Arctic Circle on a husky sledding holiday in Lapland. Siberian huskies are full of energy, and it’s an exhilarating ride through a magical landscape of snowy forests and frozen lakes. All you hear is the panting of the dogs and the whoosh of the sledge. Young children can go out with a driver, and adults and older children can try their hand at harnessing and ‘mushing’ their own team of dogs. Days are short this far north, but when the sun goes down you might get lucky and spot the swirling greens of the Northern Lights.

Known as the land of fire and ice, Iceland mixes winter activities with active volcanoes and thermal springs. Climb on board a modified ‘Superjeep’ to tour the Golden Circle; the spectacular landscapes of Thingvellir National Park, the original erupting hot spring at Geysir and the powerful Gullfoss waterfall. You can also speed onto the ice of one of Iceland’s glaciers on board a snowmobile. And if you’re feeling really brave, over 12s can snorkel in the clear waters between two tectonic plates at Silfra. By which time you might need to warm up in the steaming waters of the Blue Lagoon.

For something a bit more unusual, try your hand at snowbiking in Scotland. A snowbike is a cross between skiing and cycling and anyone over eight can give it a try. The bike has a steering wheel with skis in place of tyres, and you also wear short skis on your feet to help with balancing. It takes a bit of getting used to but you’ll soon be zig-zagging down the slopes. You can try out snowbiking in Scotland at the Nevis Mountain Range near Fort William. The mountains here also have pistes for skiing and snowboarding as well as ice climbing trips for older teenagers.

So try something a little different this half term, with one of these amazing winter sport options.