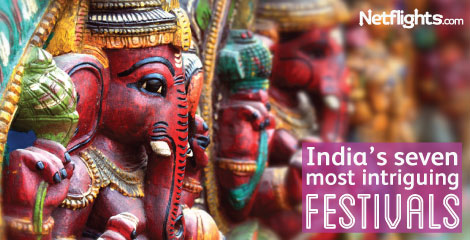 India is a country well regarded for its delicious and spicy food, vibrant culture and a fast moving pace of, which needs to be experienced to be believed.

Alongside its host of fantastic sights, glorious heat and cultural experiences, the country plays host to a wide variety of religious, cultural and traditional festivals each year.

Here are seven of the best, you need to experience.

Known as the ‘Festival of Lights’, this is one of the most well-known to take place in India. The five day festival marks the beginning of the Hindu New Year, celebrated throughout the country, gaining its nickname due to the wealth of fireworks, candles and small clay lamps that illuminate the festivities, said to mark the victory of light over darkness.

People begin planning for the festivities a month before it occurs with the cleaning and renovating of homes. Diwali itself takes place during October or November each year, depending on the cycle of moon.

Taking place across two days, the ‘Festival of Colours’ celebrates the victory of good over evil. The first day of festivities begins with the ‘Holika Dahan’ (Holika Bonfire), where people gather and celebrate the end of Holika; a demoness who was burnt to death with the help of the God Vishnu. The following day sees the spraying of colours and water over each other, known as ‘Dhulandi’, as people enjoy celebrations and parties throughout India.

This carefree festival takes place in either February or March each year, on the full moon night in Phalguna (the 12th month of the Hindu calendar).

This lively and vibrant festival takes place across nine days and is known as the ‘Festival of Nights’. The festivities are broken into three separate parts, with three days each dedicated to worshiping different goddesses; the Goddess of Valor, Maa Durga, the Goddess of Wealth, Ma Lakshmi and Maa Saraswati, the Goddess of Knowledge.

The event sees fasting taking precedence over all other activities, with the evenings giving rise to a host of celebrations, including religious and traditional dances, folk dancing and traditional songs along with young men and women donning traditional brightly coloured clothing.

The nine day festival takes place during September or October each year.

Every year during the month of February the dunes of Rajasthan, located in the north of India and known as the ‘Land of Kings’, comes alive at this wonderful festival.  Celebrating folk culture, you’ll find a unique showcase of various forms of entertainment.

Be wowed by everything from puppeteers and acrobats, to fire dancers and folk singers, and take part in fun games such as the Matka Phod Race and tug of war. Observe camel polo and camel decoration, alongside embarking on a ride on the majestic desert dwellers.

Sitting in the North East of India is the State of Nagaland, where the yearly Hornbill Festival takes place during the first week of December.

Attracting travellers from all corners of the world, they come face to face with Naga tribes to experience the myriad of colourful events, from sports and folk dancing to song performances and ceremonies. Alongside this you’ll also find delicious foods to sample and traditional paintings, sculptures and wood carvings that make unique souvenirs to remember this week by,

Starting its life back in 2006, this celebration of literature takes place toward the end of January each year.

Taking place in the heart of Jaipur City at the Diggi Palace, visitors will find everything from local language writers and Nobel laureates to debut novelists and Man Booker Prize winners. Enjoy the discussions, debates and readings from some of the most remarkable authors from around the globe, and make the most of the various interactive workshops and live music sessions taking place throughout these few days.

Situated around 20km from Bangalore at the Fireflies Ashram in Dinnepalya, this dusk till dawn musical celebration kicks off at 7pm before ending at 7am.

Across the 12 hours you’ll witness a whole host of varied musical performers, with a particular emphasis on eclectic soul, which has witnessed crowds of up to 5,000 people, who all share in the fun and lively atmosphere. You’ll also find an equally intriguing and creative space at the Art Village to enjoy too.

Created by Akshath Jitendranath and Ananda Siddhartha at the age of 11, the event donates its proceeds toward the education of adivasi children in the Kabini area, which is just outside Mysore.

So if you’re visiting this beautiful and intriguing country there’s usually a festival going on, so be sure to immerse yourself in one, and get a true taste of India and its culture.

CultureFestivalsIndia
Don’t know where to start? Inspire me...