New Zealand is a must visit holiday destination to rival some of the world’s hot spots.

With excitement to be had around every corner – from skiing, sky diving and bungee jumping for the sports enthusiasts – to an abundance of diverse wildlife, including whales, dolphins and one of the world’s largest and most unique bird species; New Zealand has something for everyone.

But it’s the diverse scen 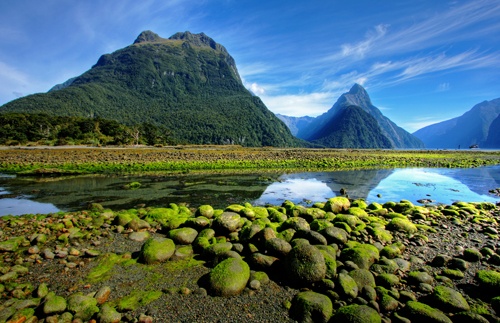 ery, filled with sharp mountain peaks, sprawling valleys, black sand as well as golden beaches, and vast forests that are making it not only a favourite with holiday makers, but a favourite with Hollywood.

Since the year 2000 many big Hollywood pictures, including two of the biggest film series we’ve ever seen, have been filmed in NZ; The Lord of the Rings and The Hobbit trilogies.

These epic adventures were filmed entirely in New Zealand, and you can visit many of the filming locations, where you can experience the real life Middle Earth, along with the many other wonders this country has to offer.

If we’re going to start exploring the land of Tolkien’s creation, then the place to start is Matamata; otherwise known as Hobbiton in both the LOTR and Hobbit films. With the rolling hills and picturesque scenery giving life to The Shire, you can pay a visit to the set as its open for guided tours. Here you can visit the Green Dragon Inn, the Party Tree, take a look at Bag End and listen to stories of how Hobbiton came to be.

As the area is found in the Waikato region, which is renowned for its horses and dairy farming, there are plenty of farm stays and farm tours to enjoy. You can also visit the stunning 153m jaw dropping Wairere Falls, the North Island’s highest waterfalls, which provide excellent walking opportunities – a real favourite of locals and tourists alike.

Although this area was used to film several locations in The Hobbit: An Unexpected Journey, the precise filming locations were on private property, but don’t let that discourage you from visiting.

As the country’s sunniest region, you can explore the beautiful golden beaches or head to the rugged mountains and immense forests, to get an idea of what the hobbits went through. Get some adventure time here by exploring the three to five day walk along the Abel Tasman Track, or go sea kayaking around the coast and observe the seal colony and the little blue penguins.

Nestled in the north west of the South Island, Nelson and the surrounding areas, is one of the most picturesque places in all of New Zealand. That’s really saying something!

Used for both trilogies, some of the most memorable scenes from the films were shot here. With part of the Wargs chase and one of the biggest battle scenes; the Battle of the Pelennor Fields filmed in a remote field in Twizel, this area is of crucial importance to the backdrop of the films.

There’s much more to Twizel than battles and chases, however. Here you can take in the magnificent scenery and explore the trails of the Mount Cook National Park or partake in some exciting activities that include kayaking, mountain biking, hiking, climbing, skiing and horse trekking.

Used within the first Hobbit film for much of the aerial filming, Mount Cook is the tallest mountain in New Zealand. Situated within the Mount Cook National Park (Aoraki National Park), you’ll be fascinated by the sheer volume of gigantic mountains, vast glaciers and permanent snow fields that cover the landscape.

Used within the epic adventure movies, Wanaka is renowned for its flawless views, offering up excellent adventure and sightseeing opportunities, as well as world class skiing facilities.

For the water lovers out there, Lake Wanaka offers activities including jet boating, sailing, fishing and kayaking. Or explore other avenues of adventure like canyoning, climbing and skydiving.

The Central Otago region provides tourists with excellent opportunities to explore untouched landscapes that you can usually have to yourself. Take a tour of the area and see some secluded spots you wouldn’t necessarily get to experience; or explore the areas vineyards and sample some of New Zealand’s finest wines.

Finally Treble Clone provides the largest ski area on the South Island, with some stunning slopes offering spectacular views, alongside excellent ski conditions for those who want an adventure packed holiday.

With a magnificent backdrop that looks as if it was created for these very films, the majestic cliffs, thick forests and surrounding areas of Piopio provided much of the filming locations for the first Hobbit film.

Scenes including the exit from the Troll Hoard Cave, The Company arriving at a destroyed farmhouse, Gandalf bestowing Sting upon Bilbo, Radagast’s arrival and the Gundabad Wargs and Orcs attack were all filmed in areas here, including Trollshaws Forest and Staddles Farm.

As the location of the Warg Chase in The Hobbit: An Unexpected Journey, the area is surrounded by picturesque views of mountains, making this vast lake the perfect spot for holiday pictures. You can explore this exquisite piece of nature whilst visiting Mount Cook, where you can take in the sheer vastness of the watery stretch and spend time on the surrounding pebble beaches.

When Bilbo and The Company depart Rivendell to continue on their epic quest, the magical setting that stands before you may seem like a land we could only dream of. But this scene, with its cascading waterfalls tumbling down sheer rock faces are part of the Earnslaw Burn, a giant glacier near Queenstown which you can visit and see exactly where the scene was shot.

When in Queenstown you can take in more scenery and enjoy the walks throughout places like Queenstown Hill and Queenstown Garden; or take part in some adventurous activities like sky diving at 15,000ft or bungee jumping from the world famous Nevis, which hangs 134m over a ravine. It’s also one of the biggest party destinations in the country, the perfect way to unwind after discovering the delights of the country’s scenery.

A fantastic scene from the first movie from the Hobbit Trilogy is where we see dwarves floating down the river in giant barrels. This was filmed on the Pelorus River in Marlborough. You can experience this, by venturing to the river and taking part in a kayaking guided tour, or you could just take in the beautiful scenery with a nice river side walk or venture towards the Pelorus Scenic Reserve; filled with walking opportunities. The area also makes for an excellent camping site. Marlborough is also one of the most famous wine growing regions in the world.

Considered one of the most beautiful and dramatic places in New Zealand, this majestic park was used for filming in both the Lord of the Rings and The Hobbit trilogies. Many of the scenic shots in the films were done here, such as the The Company escaping on eagle-back in the first hobbit film.

With ancient rainforest clinging to the mountains, gigantic waterfalls that tumble for hundreds of meters, massive mountain peaks – some which are covered in snow – and beautifully glistening water, you’ll be wowed by the area’s utter beauty. You can even take a helicopter or boat tour to make the most of your adventure.

With the next film in the Hobbit trilogy, The Hobbit: The Desolation of Smaug, released on December 13th in the UK you can now visit the very places where the films were shot and experience the wonders of middle earth first hand.

Adventure holidaysAucklandFilmsNew Zealand
Don’t know where to start? Inspire me...