Sports in the Sunshine State – an alternative side to Orlando 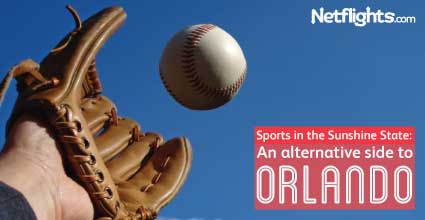 Florida is famous for many things. The sunshine, Disney, the Everglades, the glitzy lifestyle of the likes of South Beach, and the Winter Music Conference to name just a few. But what you’ll also find amongst the locals is a love for sport, with a number of professional teams across the traditional American sports, and one we’re a bit more familiar with.

Even the likes of David Beckham are trying to muscle in on the Florida sporting scene, as the former England Captain is still in the process of attempting to secure a stadium site for his proposed Major League Soccer franchise in Miami.

For sports fans travelling to Florida, you can take in games from the following teams:

Here we’re going to focus specifically on Orlando, for those looking for something a little extra on top of the usual Disney and theme park experience.

The NBA season runs from October until mid-spring with the regular season ending in April (before the play-off starts) meaning if you’re travelling to Florida for a little winter sun, you can also enjoy the best in elite level basketball. The Magic play their home games at the Amway Center in the Downtown area of the city. It’s easily accessible by both car and on the SunRail. Head to the official website for more details on how to get there.

If you’re planning on taking in a game whilst in Orlando, it’s worthwhile booking your tickets in advance. With a capacity of around 18,000 for NBA games, tickets can go fast. The official NBA site is a good place to start.

Whilst the Magic have been around since the late 80s, Orlando City were formed in 2013 and have just embarked on their first ever MLS campaign. Currently they play their home games at the Citrus Bowl and will do so for their inaugural season before kicking off 2016’s MLS championship at the new Downtown Soccer Stadium.

The MLS season begins in January running through the summer, with the final game at the end of October, giving you ample opportunity to catch a match when holidaying throughout the year in Orlando. For news on tickets head to the official site.

Despite being a new team, Orlando City has already captured the imagination of the football world by signing former World Player of the Year and Brazilian maestro Kaka. Having played for both AC Milan and Real Madrid at the height of his powers, Kaka is a real draw for City and one player football fans the world over would pay money to see. Catching him in action in Orlando sounds like the ideal holiday extra for sports fans.

Orlando really does have everything for the perfect family holiday.

Find out what’s on when in Orlando

Fly and drive holidays in Orlando