The unseen side of Texas 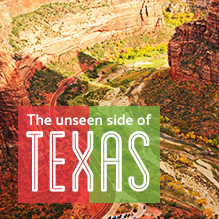 An unseen side to texas

Want to include Texas on your American travel itinerary, but think it’s all cowboys, oil barons, and Tex/Mex food? Once you get behind the stereotypes that obscure the unseen side of Texas, you’ll find that it’s a three dimensional destination filled with attractions that’ll appeal to those with sophisticated tastes. Let’s look at three popular cities in the Lone Star State to see what awaits you there.

See:
Meadows Museum of Art
While Dallas is primarily known for being the place of President John Fitzgerald Kennedy’s demise and playing home to obscenely rich Texas oil multimillionaires and billionaires, it also houses its fair share of culture. The Meadows Museum of Art is one such place, as it’s home to the world’s largest collection of Spanish art outside of Spain. Admire work by A-listers such as Picasso and El Greco as you walk through its many galleries.

Even though Texas is well known for its steakhouses, its wealth has allowed for a myriad of foreign alternatives to pop up as alternatives. In Dallas, one of the best rated restaurants in the city isn’t dedicated to grilled beef, but the rich culinary traditions of Old Europe, as The French Room has brought the best of its nation’s cuisine to the heart of Texas. Be sure to try the lamb or the seared tuna.

Want to rub elbows with celebrities, socialites, and the wealthy upper class of Dallas? If you have cash to burn and some fine duds to wear, spending an evening at the Urban Oasis at Hotel Zaza is the way to go. With a pool acting as the perfect centrepiece, and the skyscrapers of downtown Dallas rising all around you, you’ll quickly forget about the double digit prices you’ll be paying for your (yummy) cocktails.

Even during the cooler portions of the year, the heat in Houston can be swampy at times, so why not check out one of its most distinctive fountains in the process? The Gerald D. Hines Waterwall Park has a 20 metre high horseshoe shaped concrete monolith as its cornerstone, which has torrents of water cascading down its interior from 10 am to 9 pm daily. Many choose to pack a picnic lunch when visiting, so drop by a supermarket deli counter before heading over, so you can do the same.

Flying in the face of Texas’ masculine-esque bravado, Houston’s best restaurant specializes in molecular gastronomy, with a focus on American flavours. Served up in tasting menu portions, the dishes at Oxheart cannot boast the serving sizes typically associated with this state; but the flavours will give you a sense of the very best of what American cuisine has to offer.

Shop:
Harwin Drive between Fondren and Gessner
Want the latest fashions at unbeatable prices, despite the very real risk some of the accessories on sale may be knockoffs? Then stroll to Harwin Drive between Fondren and Gessner in Houston’s southwest, where many importers bring in goods from around the world, with much of the most eclectic original fashions being from Asia.
Drink:
The Saint Arnold Brewery

Possessing the status of being the oldest microbrewery in the state of Texas, touring the Saint Arnold Brewery is an activity you have to undertake before moving on to your next stop in the Lone Star State. Admission comes with four 8oz sleeves of their finest brew, so arrange safe transportation to and from the site before heading out (i.e. a taxi or a designated driver).

Suffering in the stifling heat that Texas is famous for, but can’t wait for a trip to the coast to cool off? Take a dip at the Barton Springs Pool, which is fed by a natural spring. The waters that make up this pool stay at around 20 to 22 degrees Celsius year round, making it refreshing at summer’s peak and a somewhat warm dip during the cooler months of winter.

Being a culturally diverse city despite its small size, it’s no surprise to locals that the best place to dine in Austin is in a Japanese establishment. Uchi offers sushi many swear is better than what they’ve tried in the Far East, which is lofty praise for head chef Tyson Cole and the cooks that serve under him.

While Austin is the self-proclaimed live music capital of the world, you might not be a fan of Texas-style honkey-tonk country. Fair enough. Fortunately, there are many other genres of music that have their favoured forums sprinkled throughout town.

For those that are into jazz, the place to be is the Elephant Room, where acts from around the country come together to make some of the funkiest music you and your friends have ever heard.

TexasUSA
Don’t know where to start? Inspire me...