The unusual culture of Montreal 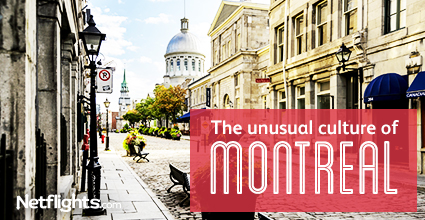 The unusual culture of Montreal

Many Canadians laugh when people tell them that Brooklyn was ground zero for hipster culture.  Montreal, of course, was hipster before being a hipster had a name.  The Canadian city has always been quirky.  Montreal has never really fallen into any usual classification as a tourism destination either.  As such, there are plenty of unusual cultural and tourist experiences to be had in Montreal. These are just a few.

Montreal actually has a bevy of absolutely beautiful cemeteries.  So much so most have turned into “parks” more than places of mourning.  The most popular cemetery to visit, Cimetière Mont Royal, is full of ghost stories, and strange history.  It’s also the largest cemetery in all of Quebec, so don’t get lost, or risk being haunted.

Jazz music is engrained in the culture of Montreal.  In fact, Montreal is without a doubt the jazz music capital of Canada.  On any given night in the city there are a wide variety of options in regards to venues for fantastic jazz.  Alternatively, if you’re a massive fan of jazz music, then you might want to come to the city in June or July when Montreal hosts their international jazz festival.

Ho-Ma, or Hochelaga-Maisonneuve as it’s more officially called, is to Montreal what Brooklyn is to New York.  This is the heart of Hipster culture in the city.  One of the poorest neighbourhoods in all of Montreal, Ho-Ma has become a breeding ground for the artistic types.  Here you’ll find musicians, painters, photographers, and quite a good selection of foodie options.

Along with the Hipster culture of Montreal comes the vintage look.  And, they say that Montreal actually has more vintage stores than any other city in the world.  In the city, you’ll find the vintage shops by looking for the word “friperie”, rather than vintage, and there’s a wealth of them scattered along Rue St. Laurent.

It wouldn’t be a dive into Quebecois culture without a steady stream of poutine to eat.  If you ask most Canadians, in fact, what their national dish is, they’ll likely respond with poutine.  Poutine is essentially French fries covered in cheese curds and then melted by a beautiful gravy.  However, a bunch of “alternative” poutine styles have also sprung up over the years.  For me, the best traditional poutine in the city is found at La Banquise.

CanadaCity breaksCulture
Don’t know where to start? Inspire me...