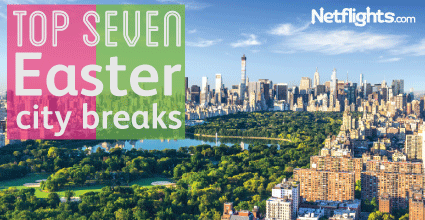 Whether it’s a family holiday, solo travel or a romantic weekend away, a city break is a wonderful way to explore the globe. With the Easter Holidays coming up here are our top seven Easter city breaks

While on a city break in Budapest, relax under the medicinal spa bubbles after a day appreciating inspiring landmarks, such as St Stephen’s Basilica, Heroes Square and the Hungarian Parliament Building; which looks suspiciously like London’s Houses of Parliament. Be sure to sample a glass (or two) of the surprisingly refined Hungarian wine, with a portion of warming red Beef Goulash, before you leave.

The iconic image of Tokyo’s sprawling cityscape of towering skyscrapers, with Mount Fuji’s snowcapped peak in the background encapsulates the city’s relationship between ancient spiritual practices, and hypermodern technological advances.

Home to more Michelin star restaurants than anywhere else in the world, Tokyo excels when it comes to dining. Sushi, sashimi, sake and Kobe beef are hugely popular among locals and tourists alike.

Marrakech is a crazy beautiful city. It’s all terracotta cube-shaped buildings, camels tied up by the side of the road, colourful fabrics, pungent spices and otherworldly sunsets.

Travel around this imperial city in style during an Easter city break, aboard a romantic horse-drawn calèche. Savour the sights of the famous Djemaa el-fna Square; the domain of snake charmers, henna tattooists and fresh orange juice vendors. Then spend a few hours bartering with larger-than-life characters, with cockney accents, in the impossible to navigate labyrinth known as the medina. As evening draws close, head to a rooftop restaurant for some mint tea, lamb tagine and couscous, as the sun showers the city in glorious oranges and pinks.

Fuelled by a Gold Rush midway through the 19th century Melbourne evolved from a small settlement to one of the world’s most developed cities. Today it’s filled with grand coffeehouses, palatial mansions and an impressive tramway.

New York New York! The international metropolis filled with iconic landmarks such as the Empire State Building, the Statue of Liberty and Times Square. Bright lights, big city; the ‘Big Apple’ has everything from world famous art galleries, and successful sports teams, to extravagant shopping malls and music venues.

Grab a cup of Joe and a bagel for breakfast before walking through leafy Central Park. Head back into town for some afternoon retail therapy and jump in a lift to see the city’s neon skyscrapers come to life as the sun sets below the ‘city that never sleeps’.

Mumbai combines grand colonial-era architecture with towering glass skyscrapers and colourful religious temples. It’s the fashion epicentre of India, a financial powerhouse and home to Bollywood; the world’s most prolific film industry. Bright colours, loud sounds and strong scents await around every corner, on an Easter city break in Mumbai.

Grab some chai tea beneath the imposing Gateway to India arch, looking out to the Arabian Sea, and then hail a taxicab to the unbelievably beautiful Victoria Chhatrapati Station. Street food costs next to nothing, and is filling and fragrant. Meanwhile restaurants serve some of the best curries on earth.

Chile’s capital city is a wonderful choice for an Easter city break. Perhaps even more beautiful than Mount Fuji in Tokyo; the breath-taking snowy Andes mountain range provides a backdrop to this energetic city. Santiago is sophisticated and worldly, one of Latin America’s most sought after destinations.

With all these wonderful places in mind, why not spice things up during your Easter with a fabulous city break.

City breaksEasterFestivalsSchool holidays
Don’t know where to start? Inspire me...