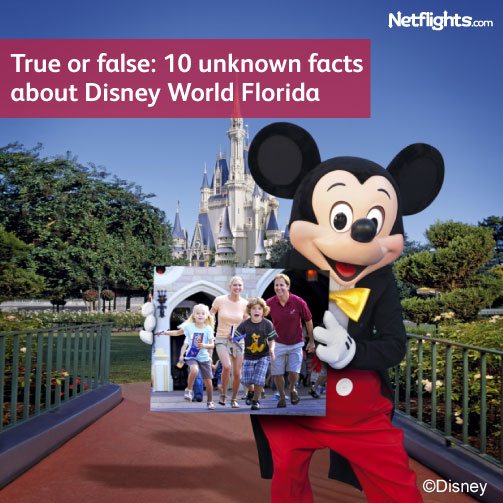 Everyone has a soft spot for the House of Mouse, and from a young age many of us dream of visiting Disney World Florida itself.

But where we may think we’ve heard everything there is about this magical land, you may be surprised that it’s harbouring a few secrets you simply need to know.

Here are our top 10 unknown facts about Disney World Florida.

As you wander the enormity of this magical wonderland, what you won’t realise is there are people running around under your feet. Just below the surface of Disney World, you’ll find a network of tunnels where workers move from one area to another. This was an idea of Walt Disney himself, who didn’t want to break the Disney magic by having characters seen in the wrong lands.

Everyone wants to know what it’s like to be a princess, and for some extremely lucky people they can find out. Situated within Cinderella’s castle is a secret suite, where you can sleep like fictional royalty. However this is only given away as a promotion and cannot be booked.

Disney World is filled with hidden messages so keep your eyes wide open. These include references to the Twilight Zone in the queuing area for ‘Tower of Terror’, Mickey, Donald and Star Wars favourites C-3PO and R2-D2 hidden in the Hieroglyphics at the Indiana Jones section of ‘The Great Movie Ride’, and Mickey Mouse hidden throughout various areas of Disney World.

But our favourite comes from the wooden leg labelled ‘Smith’ at Frontierland – a direct reference to a quote from Mary Poppins.

If you ever doubted the power of Disney, prepare to have it removed once and for all. In the ‘Hall of Presidents’ you’ll see the Presidential Seal – which took an act of Congress to install.

This seal is only found in two other places in the world; the Oval Office and the hall containing the Liberty Bell. All hail the House of Mouse.

If you work at Disney World, not only will you be able to use the secret underground network, but you’ll also be treated to some secret sports. Specifically that sport is basketball, as there’s a staff court situated within the upper third of the Matterhorn ride – now doesn’t that sound fun?

When you’re queuing for a ride your eyes tend to wander and take in what’s around you. Whilst waiting in line for the Dinosaur ride at Animal Kingdom, you’ll notice chemical formulas across the three coloured pipes. These are actually the chemical formulas of everyone’s favourite condiments, ketchup, mustard and mayonnaise, on their corresponding coloured pipe (red, mustard and white).

When approaching Sleeping Beauty’s castle, you’ll be wowed by its sheer magnificence as it stretches up into the clouds. However, even though it looks like it reaches the heavens; it actually employs some optical trickery. This comes in the form of painting the bricks smaller the closer they get to the top, meaning the castle appears taller than its 189ft. We do love that Disney magic.

You may be wowed at first by the sheer size of this wondrous land, but do you really know how big it is? Although we don’t have exact measurements, it’s actually the same size as San Francisco – a magnificent city in itself.

Us Brits like a drink, and those at Disney pay homage to this at the United Kingdom pavilion in Epcot. How do they do this I hear you ask, well it’s done through the Rose & Crown pub; named after the two most common words found in pub names in the UK. Fancy that.

Finally, if you fancy a bit of chewing gum then you’re in the wrong place. If you look around, you’ll notice there’s no gum to be seen, and that’s because it isn’t sold anywhere throughout Disney World. This is done to avoid gum being stuck randomly around the park – sorry gum lovers.

DisneyFlorida
Don’t know where to start? Inspire me...