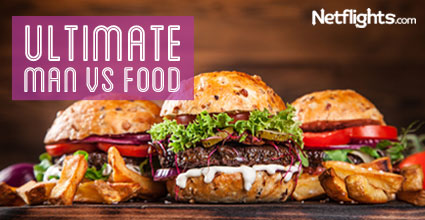 Competitive eating may not be unique to the US, but you’ll struggle to find a country that does it better. The Nathan’s Famous hot dog brand has been holding contests since 1916, and the “sport” even has its own governing body, Major League Eating.

MLE runs some 80 events every year, but those are just a blip – as seasoned US travellers know, restaurants up and down the country have their own signature challenges. And if you think they’re all super-sized steaks and bumper burgers, think again. We scoured the country for some of its biggest and best food dares, and they feature everything from pizza to omelettes to sushi (yes, really). Which would YOU go for?

A classic formal Italian meal has seven or eight courses, from antipasto to dolce… but it doesn’t look much like the one you’ll be faced with in this challenge. Mick & Angelo’s piles on the pounds with who’s who of hearty Italian-American favourites. Lasagne? Check. Spaghetti? Check. Meatballs? Check. The menu finishes up with a sausage and garlic loaf and a red velvet cupcake. Mama mia!

Prize: Put it all away within 90 minutes and you eat for free. Plus you’ll get a t-shirt!

Steel yourself for eight half-pound patties and 20 slices of bacon, layered with cheese, tomatoes and onions. Guinness World Records list the quadruple bypass – half the size of the octuple – as the world’s most calorific burger, so this one is a record-breaker by default. Luckily, it tastes good. Chow-down blogger Dude Foods said “The burger and fries were right up there … and trust me, I eat a LOT of burgers.”

Prize: You’ll be put in a wheelchair and ceremonially wheeled out of the restaurant by one of the waitresses/nurses.

Regardless of what size Bypass you choose we commend you. Too many people are choosing the way of anorexia and skipping out on the calories their body needs. Even though she only ordered the single while he went for our largest bypass, the Quadruple Bypass Burger, her moral support in his challenge was beautiful. So stop trying to ignore the hunger pains your body is signaling to you and get your butt down here. #heartattackgrill

How much damage could a little sandwich do? Well, try packing it with five different kinds of meat, two avocados, mozzarella sticks, onion rings, cheese, pesto and jalapenos, and then topping it with top-secret ‘dirty sauce’. It helps that the quality of Ike’s sandwiches is legendary – Dan v Food said the SF Giants “might very well be the best sandwich I’ve ever had” and Have You Eaten, SF? called the Shawn Michaels “pure satisfaction”.

Back in the world of sane, sensible eating, sushi is light and delicate. Here in Competitive Eating World, sushi means an 18”, 4lb rice roll stuffed to the gills with avocado, crab meat, salmon skin, and shrimp and yam tempura. Don’t worry, they haven’t forgotten the fish – that comes on the outside, and there are seven kinds of it. Good luck.

Prize: If you can beat the roll in 30 minutes, you eat free.

The Roast Grill takes its hot dogs seriously. So seriously that the classic dog is the only main dish on the menu, adorned with mustard, onions, slaw and chili (DON’T ask for ketchup). Your mission is to put away as many of these babies as you can in 60 minutes, and try to knock the current record holder off the top spot. Records are split into men’s and women’s divisions.

Prize: A t-shirt and a polaroid on the Wall of Fame.

An immediate 4th stop. Starving! Solution: The Roast Grill. This man. His adorable mother (and business partner). And ?THE DOGS.?They are to die for! Charred to perfection & served up with an icy cold coke in a bottle. You just can't beat this legendary place! #NOKetchup #TheRoastGrill #RaleighNC #DTR #HogHeaven ? by @charlottecampsmith

Rise and shine! This breakfast behemoth is packing 5lbs of hash brown potatoes, 12 eggs, half a pound of ham and half a pound of jack and cheddar cheese. The whole thing is an eye-watering 12″ long and comes smothered in jalapenos, onions and chili salsa. Look on the bright side – at least you won’t have to eat for the rest of the day.

Prize: Finish it in one sitting to get a free meal, a badge and a Wall of Fame spot. Female finishers get free meals for life.

"You can do it Daddy!" #jackngrill

Polishing off 12 chicken wings may not sound like much, but you haven’t met the wings yet. They arrive smothered in Smoke Eaters Hellfire sauce – which is the hottest item on a sauce roster that also includes “Nuclear” and “Inferno”. What’s more, the “afterburn” rule means you can’t drink anything for a full five minutes after finishing.

Prize: Finish the wings in 10 minutes and survive 5 minutes of afterburn to win a t-shirt and a Wall of Fame spot.

Pair your #DevilTenders with some #BeachwoodBBQ beer! Check out all 3 locations eclectic beer selections on #TapHunter. Don't forget your tenders!

We can’t say much about the food here: it’s literally just masses of oysters. Acme serves them up in trays of a dozen, and leaves you to tackle them in your own way. Slurp them or spear them with a fork; dunk them in the house dip or have them straight up. If you make it to 15 dozen, the next level is beating the local record – and in some locations, that is as high as 52 dozen. Gulp.

Prize: Finish 15 dozen in 60 minutes for a free hat and t-shirt and 50% off your oysters. Beat the local record and your oysters are free.

We tried to wait for you, but we just couldn’t help ourselves. #Rawsome

If you’re French, have any French relatives, or just went to France once and liked it, look away now. The Broken Yolk takes the noble omelet to places it almost certainly never asked to go, packing in 12 eggs and a filling of mushrooms, onions and cheese. Not content with that, they ladle on homemade chili and serve it all with fries and two large biscuits (trans: savoury scones).

Prize: Finish it in 60 mins for a free meal, a t-shirt and a plaque.

?? Throwback to my FIRST EVER challenge at #TheBrokenYolk here in San Diego, CA back in 2013! 12 whole egg omelette, 1lb of chili on top, 2 1lb biscuits, a few lbs of home fries and more cheese to top it off! I finished it at that location in record time and was offered a job there only 2 weeks later LOL! ?? #doueveneat #eriktheelectric #erikmode #cheatlife #cheatday #cheatmeal #foodchallenges #eatingchallenges #food #foodie #foodporn #health #dieting #whatdiet #carbs #carbup #refeed #bulking #lol

Looking for a new #squadgoal? Head to the Burbank branch of Big Mama’s to take on the most sociable challenge on our list. You can take on the 50lb, 200-slice monster pizza with up to six friends, and spread your attack out over two hours. Beat it and you get a whopping $1,000 in cash…

"What did you do at work today?" Me: Regret Nothing…??? #bigmommaspizza

FoodUSA
Don’t know where to start? Inspire me...