New York guide: Where to go and what to do in Brooklyn

Sitting just across the East River, Brooklyn used to play second fiddle to Manhattan. But, for tourists heading to NYC, it’s now a destination in its own right. While not as edgy as it once was, Brooklyn remains the cooler, trendier borough. And it’s generally calmer and greener than most of Manhattan. What’s more, it’s easier to get to from JFK, which is where most flights to New York arrive into.

Whether you’re going on a weekend getaway or looking to stay a little longer, there’s more than enough in Brooklyn to sustain your interest. It’s a sprawling borough, though, so it’s worth doing a bit of planning. Find out everything you need to know before you board the plane.

Public transport is the cheapest way to get around Brooklyn, but it’s rarely the most efficient. Subway lines are limited and, although they’re fine for getting into Manhattan, they don’t connect well within the borough. So it can be a faff to travel between neighbourhoods. Often, you must get a train into Manhattan, change lines, and then get another train back to Brooklyn. And unfortunately the buses aren’t much better. Reduced services combined with increased congestion and a lack of dedicated bus lanes means that waits can be long, and one in four buses in Brooklyn arrive off-schedule.

It’s a little more expensive, but taking a taxi’s usually a far better option. Although they’re legally required to take you anywhere you request within New York City, drivers of the city’s iconic yellow taxis don’t really like to leave Manhattan. So you won’t see too many of them on Brooklyn’s streets. Since 2013, though, boro cabs have serviced the outer boroughs. These apple-green taxis can drop passengers off anywhere in the city, but they can’t pick up new passengers in the ‘yellow zone’. In Manhattan, this means you can only flag one down if you’re north of West 110th street or East 96th street. However, you can hail them anywhere in Brooklyn, The Bronx, Queens and Staten Island – except the airports. As well as getting boro cabs, you can also use ride-hailing apps like Uber and Lyft.

To combine your journey with a bit of sightseeing, consider taking the ferry. Hornblower Cruises operates seven lines on the East River – four of which make stops in Brooklyn. You can use the service to travel between different places in Brooklyn, or to get to Queens or Manhattan. A one-way fare is just $2.75 – the current price of a subway ride. 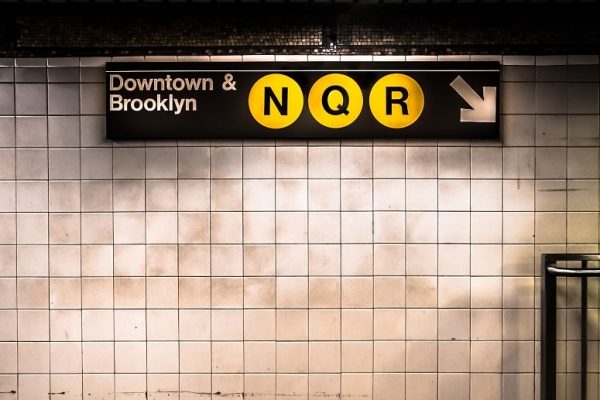 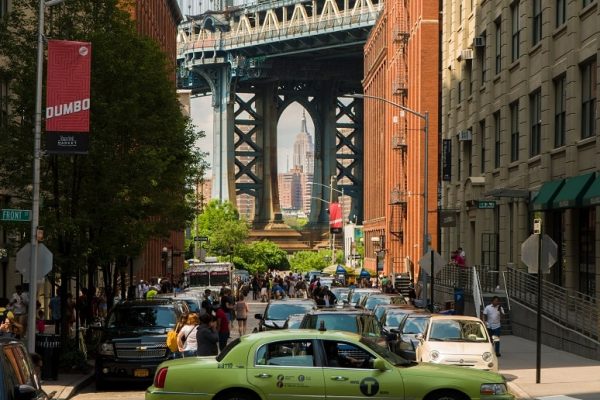 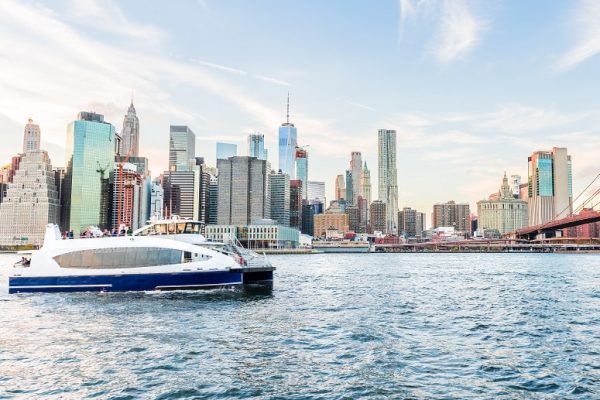 Where to stay in Brooklyn

Covering 70 square miles, Brooklyn is more than three times the size of Manhattan. All this space makes it hard to decide which neighbourhood to stay in – particularly when they all have their own individual allure. If you want to follow in the footsteps of Hannah Horvath – Lena Dunham’s character from the hit HBO show Girls – head to Greenpoint, Brooklyn’s most northerly neighbourhood. Located off the G train, this historically Polish area maintains much of its traditional charm. There are cheap, family-run grocery stores and diners selling the city’s best pierogi and kielbasas, but alongside these you’ll also spot sleek bars and restaurants and indie boutiques.

Many of the artsy crowd who have long since been priced out of Williamsburg now live in Bushwick. Just east of Williamsburg, it’s one of Brooklyn’s – and indeed New York’s – hottest neighbourhoods. The cutting-edge galleries, buzzing nightlife and eclectic food scene attract tourists and locals alike. It has something of a gritty charm, accentuated by the abundance of street murals.

Just south of Bushwick you’ll find Bedford-Stuyvesant – known to locals as Bed-Stuy. Bed-Stuy has perhaps the strongest community spirit of any New York neighbourhood. That’s hard to come by in a city with 8.5 million people, but this strongly residential area has it in droves. Block parties are common, and Sunday service is still well attended. Bed-Stuy hasn’t escaped gentrification, though. In the past decade, it’s become something of a haven for artists and young families, leading to an increase in fair-trade coffee shops and craft beer bars. But the bar and restaurant scene here remains a lot less pretentious than in many other Brooklyn neighbourhoods.

Brooklyn Heights is the borough’s oldest neighbourhood. Sitting at the foot of Brooklyn Bridge, dreamy Victorian-era brownstones dominate its tree-lined streets. Past residents of this charming, historic neighbourhood include a slew of famous faces – from Walt Whitman to Truman Capote and Matt Damon.

Nearby Dumbo (which stands for Down Under Manhattan Bridge Overpass) is a firm favourite among photographers and location scouts. Stand at the top of Washington Street and you’ll recognise the vista in front of you. The brick warehouses on either side of the street create a perfect frame around Manhattan Bridge. On a clear day, you’ll even be able to see the Empire State Building across the water. Once strictly industrial, the neighbourhood’s cobblestoned waterfront area today houses a ton of busy restaurants, shops, bars and art galleries. 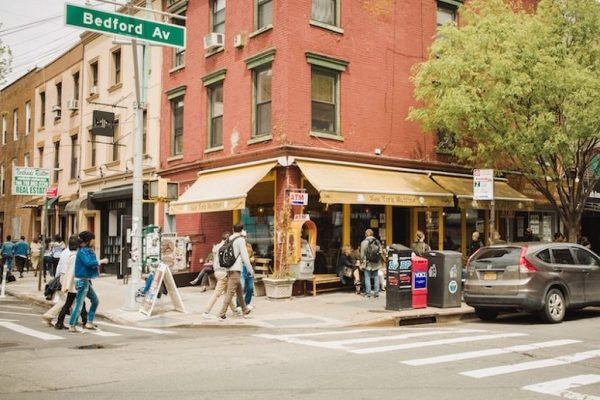 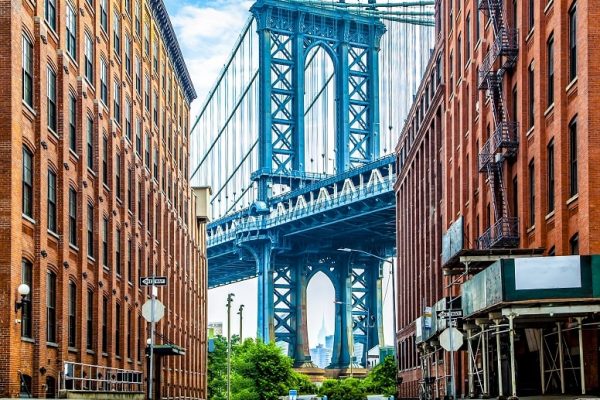 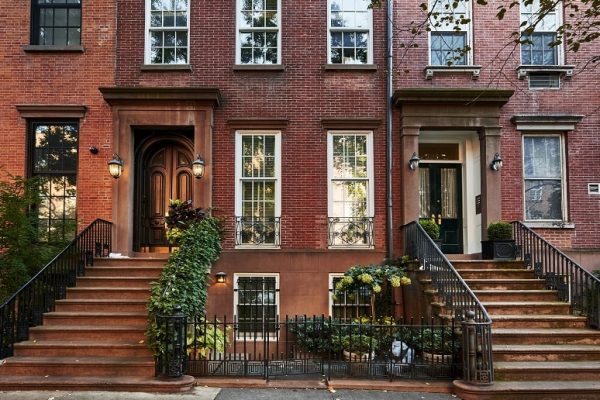 Things to see and do in Brooklyn

Many of New York’s big name attractions may lie across the river in Manhattan, but there’s no shortage of things to see and do in Brooklyn. Williamsburg in particular offers plenty of options. Learn about the beer-making process on a guided tour of Brooklyn Brewery – one of the best-known craft breweries in the world. Or just sample some suds in the Tasting Room. You can combine dinner and a movie at Nitehawk Cinema, New York’s original cinema eatery, or bowl a strike while listening to live music at the neighbourhood’s signature bowling-alley-come-rock-venue, Brooklyn Bowl. If you’re visiting Brooklyn on a weekend, and looking for vintage clothing or antique goods, join the crowd flocking to Brooklyn Flea. This popular flea market operates in Williamsburg every Saturday and in Dumbo on Sundays.

Kings County is also home to some of the best parks and green spaces in the city. Central Park may get most of the glory, but Prospect Park – designed by the same visionaries – is no less impressive. The 585-acre oasis features ornamental bridges, an expansive lake and a beautiful Beaux-Arts-style boathouse. Animal lovers should head to the Prospect Park Zoo. Here, you can hang out with almost 400 creatures, including baboons, red pandas, North American river otters, dart frogs and sea lions.

Brooklyn Botanic Garden, on Prospect Park’s northeastern edge, is one of the most picturesque spots in the entire borough. Open year round, it features flora from all over the world. Visit in late April or early May to see blooming cherry blossoms, or escape the cold in the winter months at the indoor tropical pavilion. And if you go on a Tuesday, you won’t have to pay an entrance fee!

For an artistic interlude, you’ll find Brooklyn Museum right next door to Brooklyn Botanic Garden. Stuffed to the brim with over 1.5 million objects, this cultural gem is the third largest of all New York museums. The African, Oceanic and Egyptian collections are particularly impressive. Or, if sport’s more your thing, you can catch a pro hockey or basketball match at Barclays Center in Downtown Brooklyn.

Two iconic Brooklyn spots that offer stellar views of Lower Manhattan are Brooklyn Heights Promenade and Brooklyn Bridge Park. Stretching 1.3 miles along the East River shoreline, Brooklyn Bridge Park runs from the far side of the Manhattan Bridge in Dumbo to the west end of Atlantic Avenue in Brooklyn Heights. As well as playgrounds, walkways and summertime events – like open-air film screenings and outdoor yoga classes – it’s where you’ll find Jane’s Carousel. Built in 1922 by the Philadelphia Toboggan Company, the carved wooden merry-go-round has been beautifully restored. A glass pavilion, designed by Pritzker Prize–winning architect Jean Nouvel, now protects it from the elements.

Thrill-seekers should definitely have Coney Island on their Brooklyn bucket list. A seaside destination with a kitschy carnival vibe, Coney Island is New York’s playground. Stroll along the iconic boardwalk with a hotdog from Nathan’s Famous, sit on the sand and catch some rays, or pop in to see the sharks, turtles and clown fish at the New York Aquarium. And you’ve got to ride the Cyclone – Luna Park’s legendary wooden rollercoaster that’s been eliciting screams since 1927. 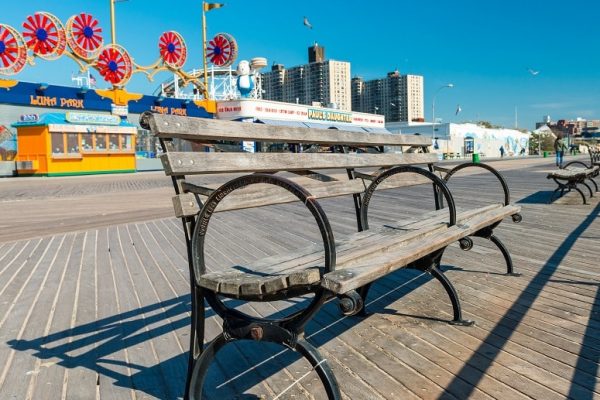 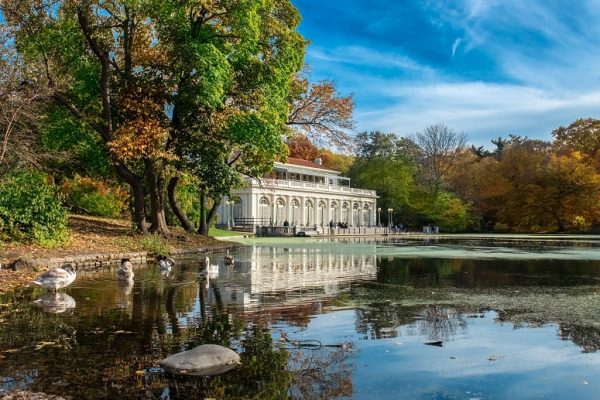 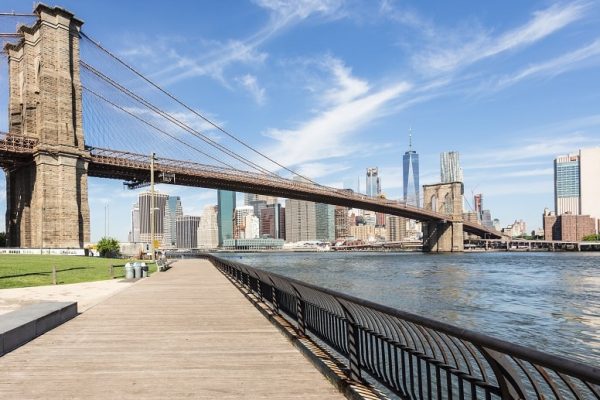 You can find pretty much any kind of cuisine you can think of in New York. But there’s one food associated with the city above all others – pizza. And no borough takes pizza more seriously than Brooklyn. There’s ongoing debate about which of Brooklyn’s many pizza joints is the best, but Roberta’s in Bushwick, Grimaldi’s and Juliana’s in Dumbo, and Lucali in Carroll Gardens are all firm favourites. For more authentic Italian fare, head to Misi in South Williamsburg. This eatery from acclaimed chef Missy Robbins serves delectable handmade pasta dishes and vegetable antipasti. Be warned, though, dinner reservations are hard to come by.

If steak’s more your thing, check out Peter Luger. A true Brooklyn icon, this Williamsburg chophouse has been around since 1887. Boasting one Michelin star, Zagat has named it the best steakhouse in New York for 30 years running. That’s an impressive feat – particularly in a city where steakhouses are a dime a dozen. Dry-aged porterhouses cut for two or more people are the speciality at Peter Luger.

La Vara in Cobble Hill is the place to go for tapas. The menu here celebrates the Jewish and Moorish influences in regional Spanish cuisine. And if you fancy Asian flavours, look no further than Kichin. Describing itself as ‘Korean-ish’, this Bushwick restaurant serves a pared down selection of Asian-American fare.

Finally, The River Cafe in Dumbo is the best special-occasion restaurant in Brooklyn. Sitting right at the foot of Brooklyn Bridge, it enjoys one of the city’s most unique and romantic settings. Besides modern American cooking, prepared using the freshest ingredients, the elegant New York institution offers unrivalled views of Lower Manhattan.

Looking for cheap flights from London to New York? We’ve got it covered. And if you want to explore more of the city, have a look at our guide to Manhattan.

New YorkUSA
Don’t know where to start? Inspire me...