Flights from London to New York

If you see flights from London to New York for less than this, you've found a good deal.

If you want cheap flights from London to New York, this is the best time to book.

These airlines usually offer the cheapest flights from London to New York.

You can fly non-stop from London to New York with these airlines.

These airlines fly from London to New York, but you’ll have at least one layover.

This is the most expensive time to fly to New York. If this is when you want to go, book your flight from London in advance.

Flights from London to New York are usually cheaper at this time of year.

This is the shortest flight time from London to New York.

Today alone, Netflights has searched over 21,540 flights. 23 / Nov / 2022 is currently the lowest priced day of the year to fly the London/New York route. There are around 5,119 flights on any given week from the UK to New York and the cheapest month to fly right now is November.

How to get cheap flights from London to New York

If you’re looking for cheap flights from London to New York, it’s worth considering the time of year you want to go. The seasons in New York are the same as the UK, but temperatures are more extreme in the USA. In July and August, NYC feels humid as temperatures consistently hit the high twenties. Meanwhile, January and February see minus temperatures and snow – but if you can brace the cold, this is when you’ll find the best deals to New York. Flights to New York tend to be most expensive in July so, for warm temperatures and lower prices, try searching for flights in May, September or October.

Another way to find flight deals to New York from London is to search by airport. You can fly from London Heathrow (LHR), London Gatwick (LGW) or London City (LCY). And that’s not all. New York is actually served by three different airports – John F Kennedy Airport (JFK), Newark Liberty International (EWR) and La Guardia (LGA). So you have plenty of options to choose from. In fact, there are 5,119 flights from London to New York every week – and we’ve scanned them all to help you find the cheapest flights.

If you don’t have a specific airport in mind, try comparing different airlines. Most major airlines offer direct flights from London to New York, including British Airways, Delta, Virgin Atlantic and American Airlines. You can fly direct to JFK or Newark from Heathrow, with Gatwick also offering direct flights to JFK. Alternatively, several airlines provide indirect flights from each London airport – so you could potentially save money on your New York trip by having a quick stopover.

FAQs about flights from London to New York

Which airlines fly from London to New York?
You can fly from London to New York with a number of airlines – it depends on your choice of airports. If you want to fly direct from Heathrow to JFK, your options include British Airways, American Airlines, Delta, Virgin Atlantic and Finnair, to name a few. Indirect flights are also available with Aer Lingus, Iceland Air and Brussels Air. Or you could look at flying direct from Heathrow to Newark with United Airlines, KLM, Air France or Austrian Airways. You can’t fly direct from Heathrow to La Guardia, but indirect flights are provided by multiple airlines, like Delta, Lufthansa and Air Canada.

Flights from London Gatwick to JFK are available with several airlines, with direct flights offered by American Airlines, British Airways, Finnair and more. You can also fly indirectly to JFK via Madrid with Iberia, go via Shannon with Aer Lingus, or fly via Orlando with Delta. No airline flies direct from Gatwick to Newark or La Guardia, so you’d need to have a stopover in the likes of Reykjavik or Dublin.

If you want to fly to New York from London City Airport, only indirect flights are available. You can fly to Newark via Dublin with Aer Lingus, or fly to JFK via Amsterdam with KLM.

Which airlines have the cheapest flights to New York?
Flight prices from London to New York vary massively, depending on your dates and airports. From London Heathrow, the cheapest airlines are usually Air France, American Airlines or British Airways. If you want to fly from Gatwick, though, look out for flights with Iberia Airlines, Air Europa or Finnair, as these are often the cheapest.


How do I get into New York from JFK Airport?
JFK is best placed for accessing the East Side of Manhattan. A taxi from JFK into the city will cost you at least £45, but journey times vary and there are cheaper options available. You could pre-book your spot on a shuttle service which will you drop you directly at your hotel, and is available 24/7. Alternatively, you can catch the AirTrain, which connects all the airport terminals to both the subway and the Long Island Rail Road. You can get to Pennsylvania Station – in mid-town Manhattan – on the Long Island Rail Road for about £17, and the journey takes around 40 minutes. Or, you could catch the ‘E’ train towards Manhattan, and get off at Times Square or Penn Station. This takes roughly an hour, but will only cost you about £9.

How do I get into New York from Newark Airport?
Newark Airport is actually just over the border in the state of New Jersey. But it’s very easy to get into New York. Taxis or shuttle services are expensive because of the distance, but the train journey costs around £10 and takes no more than 45 minutes. Trains run very frequently throughout the day, although there’s no service between 2am and 5am. Simply catch the AirTrain to Newark Airport train station, then board a New Jersey Transit train to Penn Station in Manhattan. Once you’re in Manhattan, you can either take a cab to your hotel or ride the subway.

How do I get into New York from La Guardia Airport?
Of New York’s three airports, La Guardia is the closest to Manhattan – it’s just eight miles east of the city. Nevertheless, a taxi will take you at least half an hour – and much longer in rush hour – and set you back a minimum of £40. Shuttle transfers are available, but prices vary depending on where you’re staying and how many people are travelling. If you use public transport, the journey will take at least an hour but will only cost you a few quid. From the terminal, catch a bus to Jackson Heights-Roosevelt Ave subway station and hop on the metro from there.

What are the top things to do in New York?
New York is one of the most famous cities in the world – and certainly the most recognisable. See all the iconic landmarks for yourself, as you tick off the Statue of Liberty, the Empire State Building and Brooklyn Bridge. And no holiday to the Big Apple would be complete without a spot of retail therapy, would it? Take a trip to Macy’s and browse the designer stores on Fifth Avenue. Or, escape the concrete jungle with a stroll around leafy Central Park.

Do I need a visa to travel to New York?
If you're flying to New York on a British passport, you don't need a visa. But you will need to fill out an ESTA application online, to travel under America’s visa waiver programme. The process is usually fairly quick, but it's best to get it sorted at least four weeks before you fly.

Where other people are flying to
Massachusetts
cheap flights to Boston 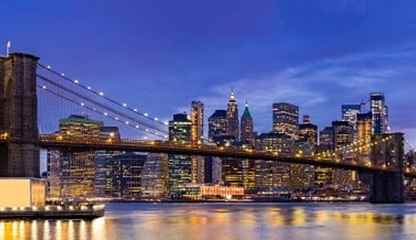 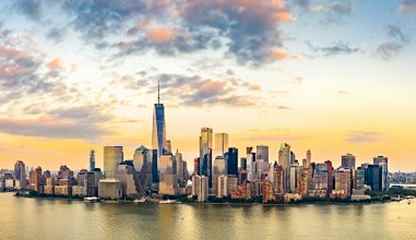