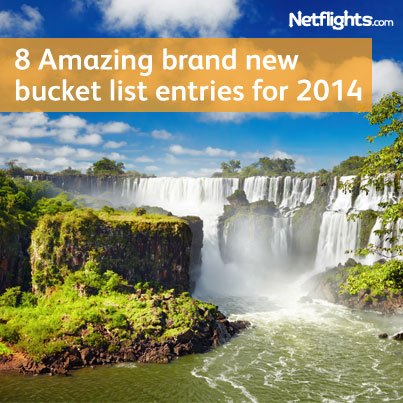 Everyone’s heard of Niagara Falls in the US, but South America trumps its neighbour in stunning fashion with the spellbinding Iguazu Falls.  Brazil and Argentina share the spoils, with the falls accessible from both countries.  With around 275 drops and huge volumes of cascading water across panoramic views, Iguazu lends itself to an incredible network of walkways that take you out into the winds and spray of the powerful flow, leaving most visitors giggling like children.

Translating as ‘Temple City’, Angkor Wat in Cambodia is a captivating Hindu and Buddhist temple complex that is the world’s largest religious monument.  Found just outside of Siem Reap, the site dates back to the first half of the 12th century, but was the subject of extensive restoration work in the late 20th, seeing a huge upturn in tourism as a result.  Simply a must if you’re headed to Southeast Asia.

Situated at the northwestern tip of New Zealand’s North Island, prepare to be spellbound at you watch the unique sight of two oceans colliding as the Tasman Sea and Pacific Ocean meet.  With the word ‘Reinga’ translating as ‘underworld’, the Maori’s believe that the cape is the point where the spirits of the dead enter the afterlife.  Relax and take some time watching this visual wonder, and get lost in the concept of the oceans flowing steadily into each other.

A sand island found on Australia’s East Coast, Fraser is quite rightly high up on the list of every traveller to the land down under.  A beautiful array of natural sights await, from the champagne pools to an inland lake and huge lizards that come nosing around your picnic table.  Take a 4×4 self drive safari, where you’ll be the master of your own destiny, just make sure you don’t get caught out by the tide, or go swimming in the shark infested waters!

Cape Town is a visually incredible city to visit, topped, quite literally, by Table Mountain.  Take the cable car up to the summit and enjoy the panoramic views that stretch out below you.  Explore the rest of the national park that yields the Cape of Good Hope, the Boulders Penguin Colony, and a selection of fantastic beaches to laze on while waiting for the sunset.

Indonesia consists of some 1700 islands, so it would be rude not to take in at least a few of them if you’re planning a trip here!  There’s a plethora of pristine white sand beaches to kick back on and inviting turquoise waters to explore, with some of the world’s best dive sites found in Indonesia.  If you prefer to stick to land, head to Borneo or Sumatra where you can hang out with the native orang-utans.

We’ve all seen those inventive and entertaining perspective pictures of drinks cans the size of people, or your friend keeping their balance perched on a giant tube of crisps.  What you may not know is that these snaps were taken on the salt plains of Uyuni in Bolivia.  A surreal natural landscape to find yourself in, the Uyuni flats cover more than 4,000 square miles, meaning there’s plenty of space to get creative with those perspective pics that will last a lifetime.

Another entry for New Zealand, the country that just keeps on giving when it comes to spectacular natural beauty.  Located on the South Island, the park throws up stunning peaks, deep fiords and lush rainforest.  It houses the magnificent Milford and Doubtful Sound, and one of the world’s most awe-inspiring walking tracks, the Milford Track.  Even the areas disposition for rain doesn’t put a dampener on things, merely serving to swell the thousands of picturesque waterfalls you can take in.