Next week, UK travellers will finally be able to enter the USA – and where better to go than new York City? Perhaps you’re craving a shopping spree, or you’re desperate to visit friends or family. Either way, if you’re planning a trip to the Big Apple, one of the first things you need to consider is which New York airport is best for you.

Flights to New York depart from all over the UK, but should you be looking at flights to JFK or flights to Newark? These are the city’s two main international transport hubs, and each has its pros and cons. We’ve compiled some useful information about each New York airport to help you make a decision.

Located in southern Queens, John F. Kennedy International Airport (JFK) is the busiest New York airport. More than 62 million passengers passed through in the last year, and there are almost 40,000 flights every month. There are six passenger terminals, and two ways of transferring between them. If you’re travelling between Terminals 2 and 4, use Delta’s JFK Jitney shuttle bus. It makes three stops – near gate C60 in Terminal 2 and near gates B54 and B18 in Terminal 4. To transfer between all other terminals at this New York airport, take the JFK AirTrain. International passengers arriving into JFK and picking up a connecting flight must claim all checked bags at Customs and recheck them with the departing airline – even if bags are meant to be checked all the way to your final destination. JFK Terminal 7 is where British Airways currently flies in and out of.

The best New York airport for shopping and dining, JFK has more than 100 retail outlets. These range from fashion boutiques and florists to gift shops, duty free and electronics stores. There’s also a huge selection of restaurants. Every terminal has a number of sit-down and grab-and-go options.

Getting into New York

JFK’s location means it’s the better New York airport if you’re staying in either Queens or Brooklyn. If you want to get from JFK to Manhattan, though, there are a number of transport options. The JFK AirTrain connects all passenger terminals to the hotel shuttle pick-up area and care hire area. It also links to Jamaica and Howard Beach Stations, where you’ll find the subway, the Long Island Rail Road, and public buses. To get from JFK to Penn Station take the LIRR. It will arrive in about 20 minutes. The A and E subway lines are cheaper alternatives, but they do take a lot longer.

If you’re not a fan of public transport, and would rather take a classic yellow New York taxi instead, there’s a rank outside every terminal. There’s a flat fare of $52 for rides from JFK to Manhattan. Tolls are additional, though, and don’t forget to tip! Journey times vary depending on traffic conditions and your exact destination. A ride from JFK to Times Square will usually take between 1 and 1.5 hours.

If you’re arriving late, or flying out very early, you may wish to spend one night close to the airport. There are a variety of hotels and motels conveniently located near JFK, many of which offer courtesy shuttles. If you haven’t already booked somewhere to stay before you land, you can use the Hotel Reservation Services at AirTrain Federal Circle Station or in the arrivals areas at Terminals 1, 4 and 7. 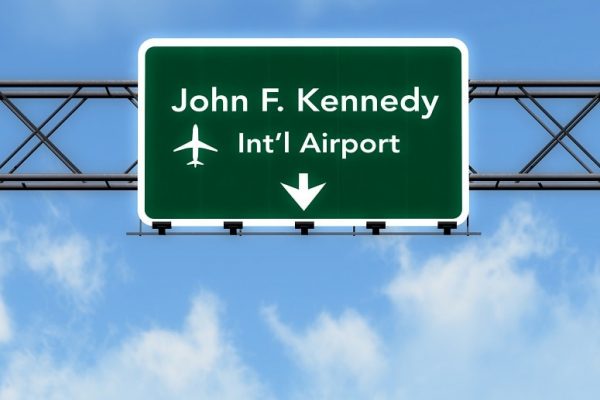 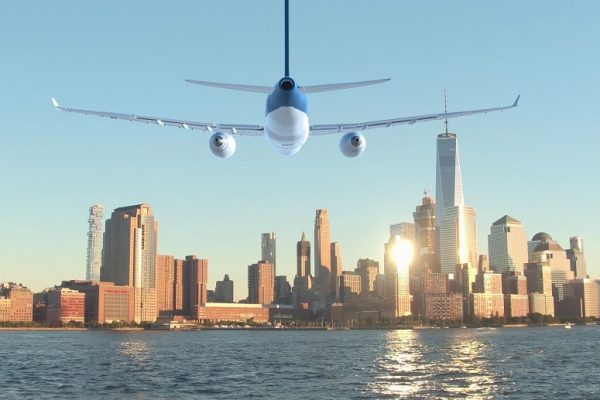 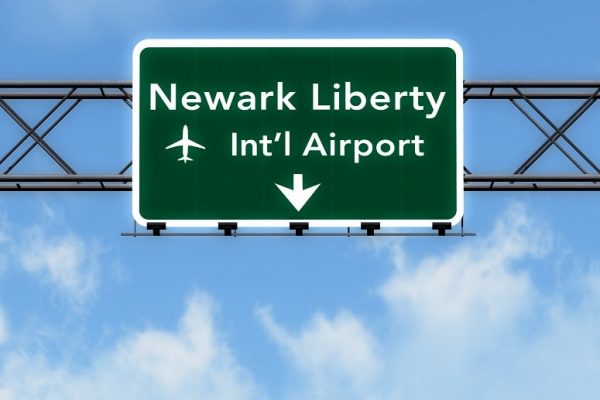 Newark Liberty International Airport – known simply as Newark Airport – technically isn’t a New York airport at all. It’s actually located across the Hudson River in New Jersey, 15 miles southwest of Midtown Manhattan. It receives about three quarters the number of passengers that JFK does, with 46 million passing through in the past 12 months.

There are just three terminals at Newark Airport. Terminal A is currently the domestic terminal, Terminal B hosts both domestic and international flights, and Terminal C is used exclusively by United Airlines. However, Terminal A – Newark’s oldest terminal – is set to be replaced by a new three-concourse, 33-gate terminal, known as Terminal One. As at JFK, there is an AirTrain which allows you to easily transfer between terminals. It operates 24 hours a day and is free to ride within the airport.

Terminals A and B both have a small selection of places to eat and shop. However, Terminal C is the only terminal at this New York airport that offers an extensive range of either. It’s also the only terminal with a spa.

Getting into New York

Your other option is to get a taxi. Fares to Manhattan range from $50 to $70, depending on how far north you’re going. These rates don’t include tolls or tips, and there’s an additional $5 charge for all destinations on the east side of Manhattan between Battery Park and 185th Street. There’s also a $5 surcharge during weekday rush hours, and on weekends between 12pm and 8pm, to all points in the State of New York, except Staten Island.

If you fancy spending the night at this New York airport, the Newark Liberty Marriott is located inside the airport itself. Alternatively, other nearby options include a Best Western, the Hilton Newark Airport or the Marriott Newark.

If you’re looking for cheap flights from London to New York, we can help.

Want some inspiration for what to see and do once you get there? Read our guide to the best New York museums, or check out the most iconic New York buildings.

AirportsCity breaksNew York
Don’t know where to start? Inspire me...