With pubs still closed and travel largely banned on account of lockdown, chances to celebrate St Patrick’s Day are few and far between this year. But that just means we’ve got more time to plan for 2022’s festivities. Rather than simply popping down to your local for a few pints of Guinness, though, why not use St Patrick’s Day as an excuse to visit somewhere that’s long been on your bucket list?

If you’re keen to embrace all things Irish on 17th March next year, consider booking flights to one of the following destinations. We reckon they’re nine of the best places in the world to celebrate St Patrick’s Day. 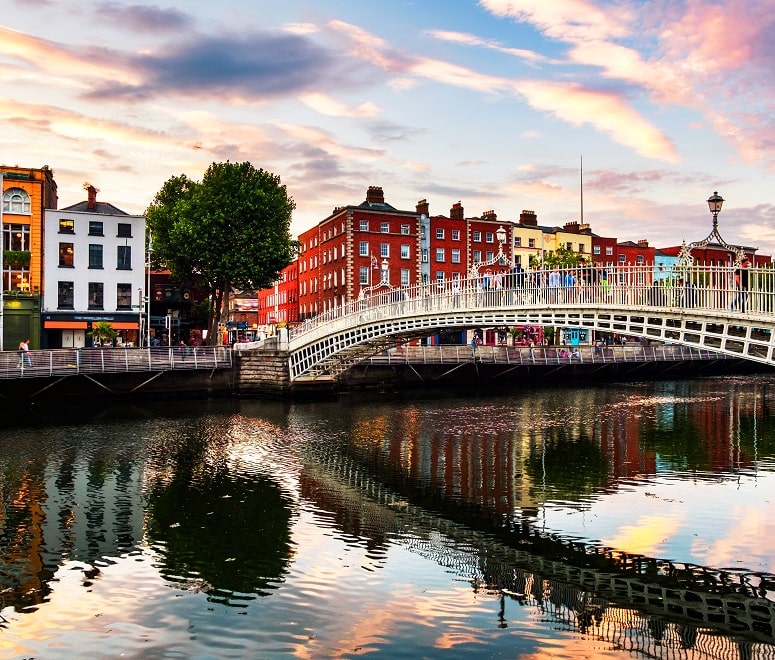 As the Irish capital, Dublin’s the obvious choice when it comes to celebrating St Patrick’s Day. There are plenty of opportunities for a pub crawl, where you can down a green-coloured pint or two, or you can take to the streets to watch the parade. It’s sadly been cancelled for the past two years, but its colourful floats and energetic Irish dancers usually attract a crowd of half a million people. You might also want to take this opportunity to discover some of the city’s main attractions, like Trinity College, the National Museum of Ireland, or the Guinness Storehouse.

Boston’s home to a huge number of Irish-Americans, so it’s no surprise that the city goes all out to celebrate St Patrick’s Day each year. A group of mostly Protestant immigrants began marking the occasion way back in the early 1700s as a way to both honour their heritage and create an Irish community in Boston. These days, the festivities are somewhat more raucous, with floats, marching bands and revellers making their way through the streets. Plus the Irish bars play host to folk musicians and traditional dancers. But it’s not all about drinking, though. Those who wish to celebrate St Patrick’s Day in a more cultural manner can walk the Irish Heritage Trail or enjoy Irish cinema at the city’s Irish Film Festival. 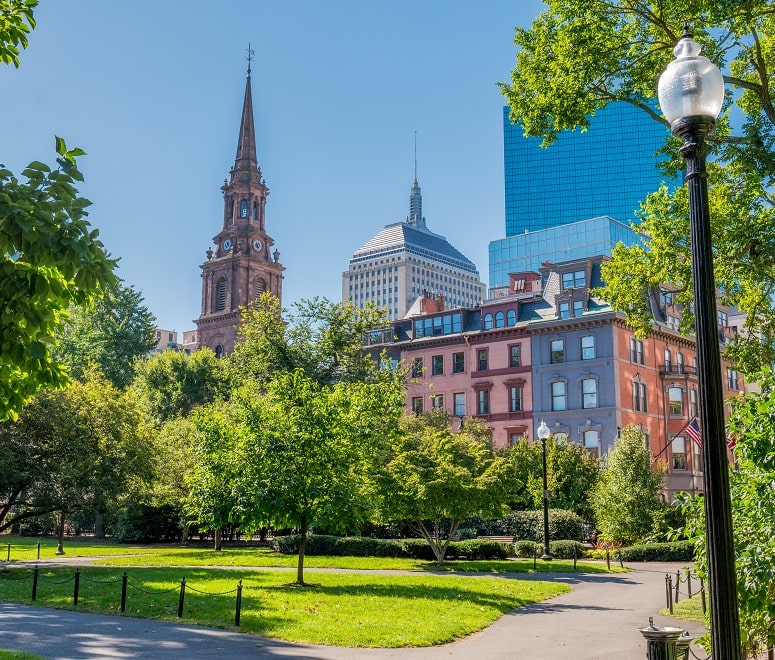 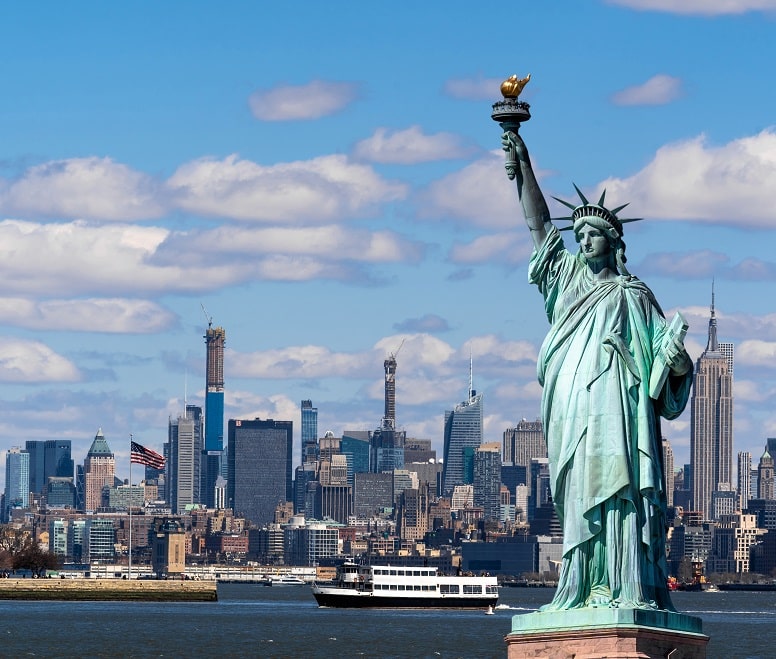 Nowhere does parades quite like New York. And the city’s annual St Patrick’s Day Parade is the oldest and biggest anywhere in the world. Things usually kick off at 44th Street at 11am, with the parade then making its way up Fifth Avenue – past iconic New York buildings like St Patrick’s Cathedral and the Metropolitan Museum of Art – before finally finishing at the American Irish Historical Society at East 80th Street around 5pm. Besides watching the parade, New Yorkers – even those without Irish ancestry – like to dress in green and pack into the city’s many Irish bars. And of course the Empire State Building, which is known to change its lights for holidays, sporting events and other big occasions throughout the year, becomes illuminated in shades of green, white and orange.

Believe it or not, Buenos Aires has one of the largest Irish populations on the planet. So it’s understandable that the Argentine capital makes a concerted effort to celebrate St Patrick’s Day each year. And, as you’d expect in a city famous for its fiestas, things get pretty lively. While the whole city gets swept up in Irish fever, most of the official activity is concentrated around the historic Avenida de Mayo. Besides a parade and a costume contest, there are more than 50 food and beer stands, as well as other stalls selling traditional Irish products, books and crafts. Live music and folk dancers take centre stage – and, on more than one occasion, a U2 tribute act has made an appearance. 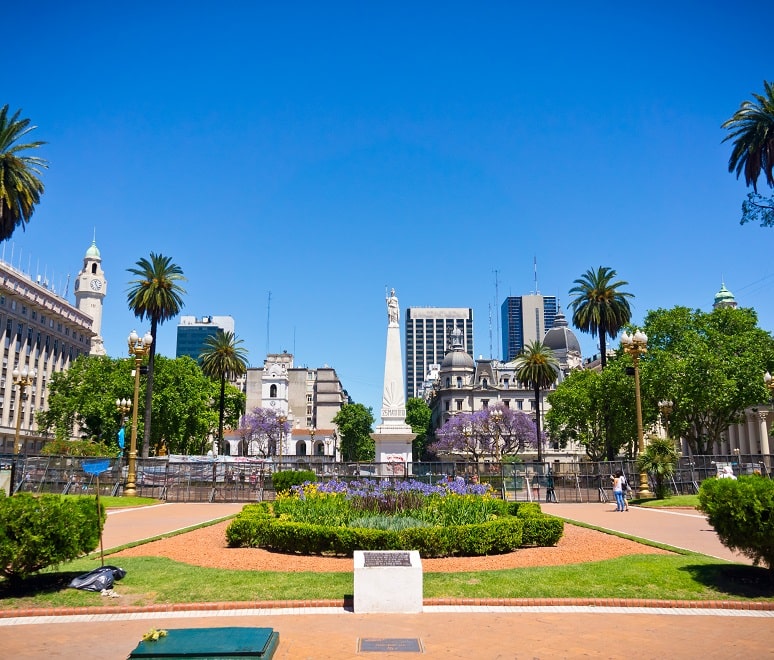 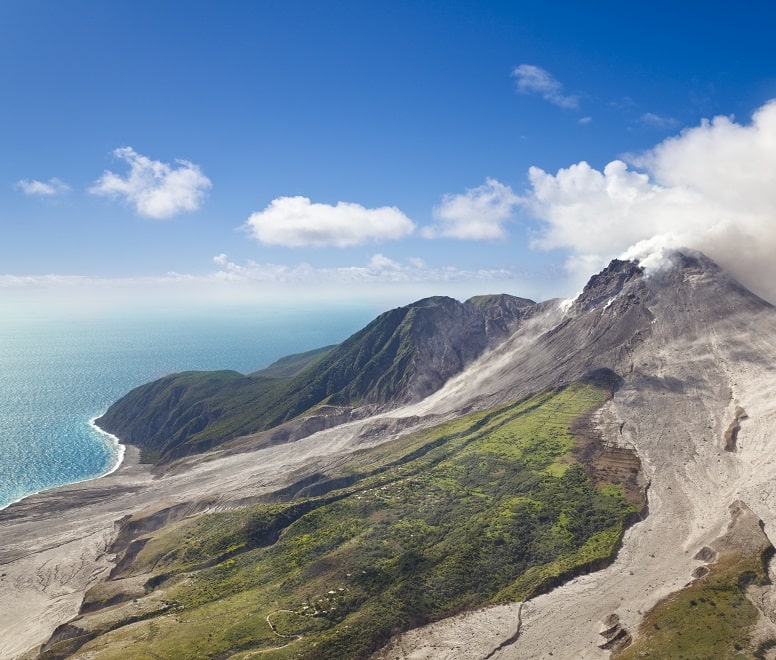 This Caribbean island might not be the first place you think of when picking somewhere to celebrate St Patrick’s Day. But it’s actually the only country outside Ireland where 17th March is a public holiday. However, unlike elsewhere, the festivities here – which last for 10 days – are not intended to celebrate Irish culture. Instead, their purpose is to commemorate the island’s history. Specifically, to honour a failed slave uprising which took place in 1768 against the early Irish settlers, and saw nine men hanged. The central part of the celebration is the masquerade dance. It sees Montserratians don tall headdresses resembling a face with a hat similar to a bishop’s mitre, like the one worn by Saint Patrick in certain depictions. They then dance and crack whips as an expression of protest against the oppression of the slave owners.

There are a number of traditional Japanese festivals that take place in Tokyo every spring, including the world-renowned cherry blossom festival. But on March 17th, Tokyoites turn out in force to celebrate St Patrick’s Day. The city’s first parade took place in 1992 as a way of introducing Irish culture to the Japanese people. Since then, it’s grown in popularity and is now the largest of 15 St Patrick’s Day parades that take place across Japan. Bringing in over 300,000 spectators, it has a carnival-like atmosphere and showcases an eclectic mix of traditional Japanese dress and Irish costumes. It also sees Japanese dancers perform alongside ceilidh bands. 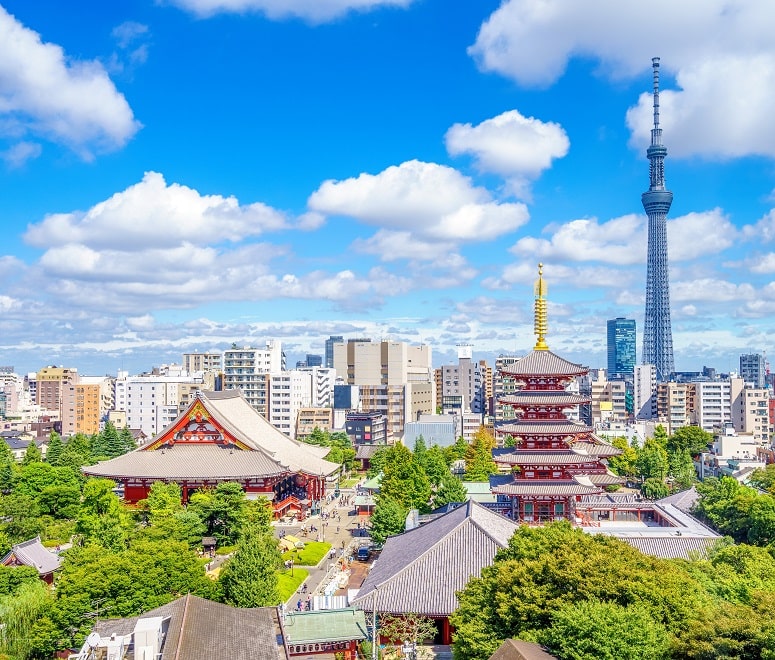 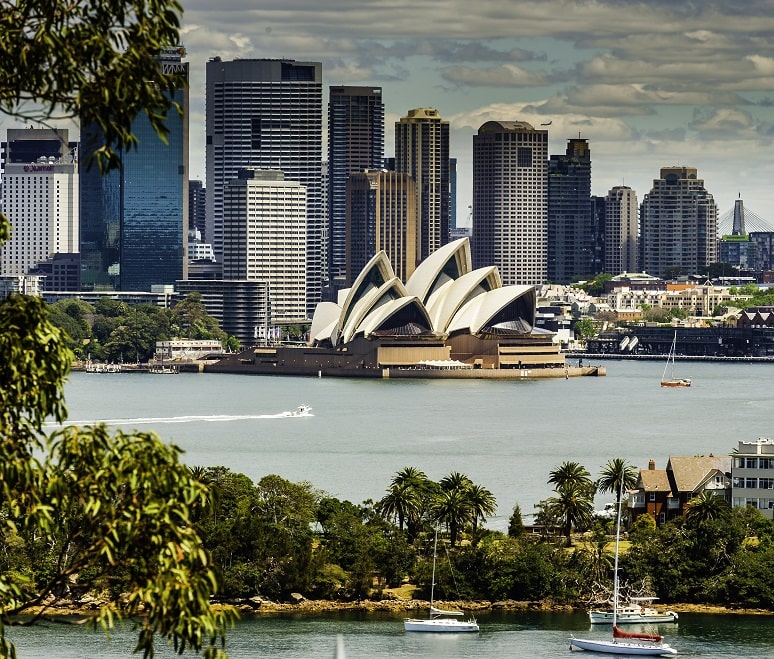 There are various places in both Australia and New Zealand that choose to celebrate St Patrick’s Day each year, but Sydney’s party is the largest anywhere in the southern hemisphere. Focused around The Rocks – a historic area of the city on the southern shore of Sydney Harbour – it begins in the morning with a traditional parade, involving 1,500 people from a variety of organisations and community groups. Then, around lunchtime, the festival kicks off in First Fleet Park. A free, family-friendly event, it includes live music, Irish dancing, Irish language lessons, crafts and face-painting alongside numerous food and drink stalls. Oh and the Sydney Opera House is lit up green as well.

It couldn’t get much further away from Ireland if it tried, but New Zealand’s largest city never fails to celebrate St Patrick’s Day. In fact, it’s one of the very first cities to see in the day each year, with 17th March arriving here 13 hours before it reaches Dublin. After the ever-popular parade, there’s an Irish Music and Dance Festival, which goes heavy on Celtic tunes and Gaelic vibes. Later in the day, things get a little less family friendly over at the after-party, and you can continue toasting St Patrick long into the early hours at Auckland’s excellent bars. 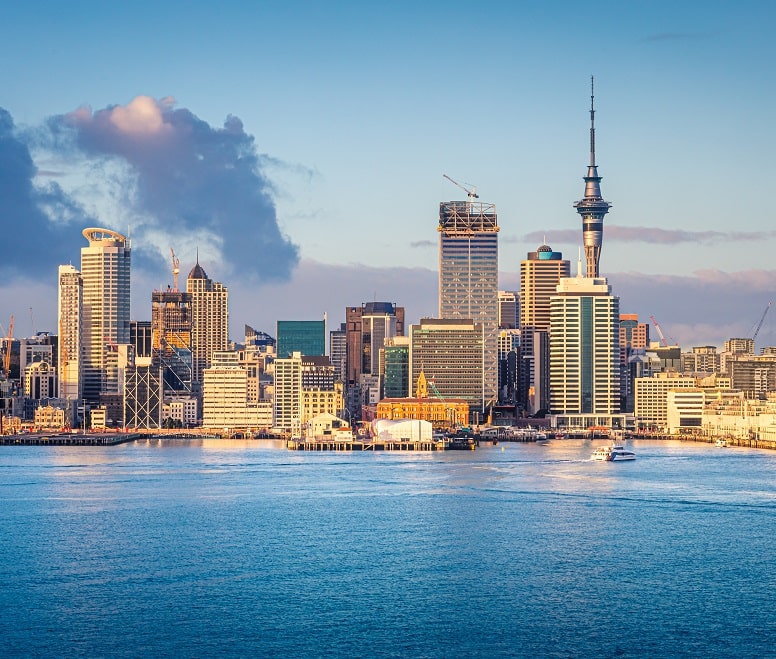 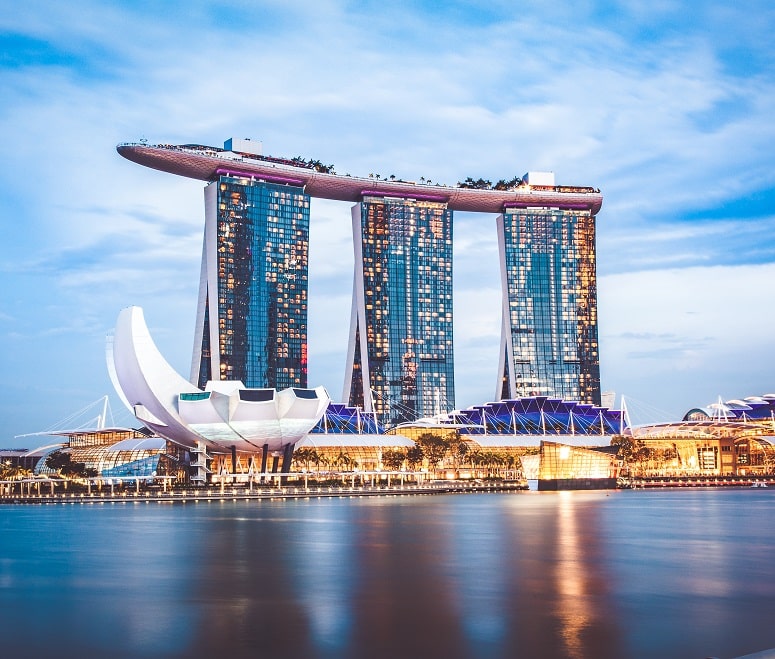 Looking to celebrate St Patrick’s Day while also enjoying a Southeast Asian adventure? Book a flight to Singapore. This compact city-state puts on the largest party in the region. It sees the Singapore River get dyed green and a parade which, in previous years, has been led by a Harley Davidson convoy. Most of the festivities take place around Circular Road at Boat Quay, but the St. Patrick’s Society of Singapore also hosts an annual black-tie ball at the Shangri-la Hotel.

Keen to celebrate St Patrick’s Day somewhere new in 2022? Check out our incredible deals. And if you’re looking for a bit of escapism right now, these are the best books to read while we can’t travel.