Come fly to Mauritius with Netflights

Find the best offers on flights to Mauritius with Netflights, so you can save on your Mauritian experience. Whether you’re looking for cheap flights for a romantic getaway, or you simply fancy a last-minute beach break, we'll search hundreds of flights to help you find the best deal.

Key facts about Mauritius be in the know

4 hrs ahead of GMT

Most popular airports to fly into in Mauritius

How much is it to fly to Mauritius?

Which airports fly to Mauritius?

You can fly to Mauritius from any of these UK airports.

It's best to book this far in advance if you want cheap flights to Mauritius.

These airlines usually offer the cheapest flights to Mauritius.

What airlines fly direct to Mauritius?

These airlines fly straight to Mauritius without stopping.

You can fly to Mauritius with these airlines, but you'll have at least one layover.

Flights to Mauritius are generally cheaper at this time of year. Or you could get a deal by booking your flight last minute.

This is the most popular time of year to visit Mauritius, so flights are more expensive.

How long should I stay in Mauritius?

On average, people spend this amount of time in Mauritius.

How long is the flight to Mauritius?

The shortest flight is from London Gatwick (LGW) to Mauritius (MRU) with British Airways, but other routes may take longer.

What you need to know before flying to Mauritius

When is the cheapest time to go to Mauritius?

Mauritius experiences its summer season during the British winter. So it’s no surprise that it’s a prime destination for catching some much-sought-after winter sun. Flight prices spike over Christmas and New Year’s Eve to meet demand, but they drop again for departures in January and February. So, if you aren’t confined to the school holidays, consider flying in February to get the cheapest flights.

If you’re really into your diving, it’s best to go to Mauritius in October or November, when the water is warm and teeming with life. This is also an ideal time to visit – it’s between the summer holidays and the festive period, while also avoiding the monsoon season. Airfares are usually lower at this time, meaning you can save some money on your trip as well.

When is the best time to book flights to Mauritius?

If you know when you want to go, it’s best to book your Mauritius flights about five months in advance to get a good deal. If your travel dates are flexible though, try searching by month to find the cheapest flights to Mauritius. Alternatively, if you want to go during high season, you could hold your nerve and try to get a last-minute bargain.

Which airlines fly to Mauritius?

British Airways and Air Mauritius offer direct flights to Mauritius from London, but most flights departing from the UK involve a quick stopover in Europe or the Middle East. When you’re looking for cheap flights, keep any eye out for journeys with a stopover – you’ll see them with Emirates, Air France and other airlines.

You can fly to Mauritius from a number of UK airports. Direct flights are available from London Gatwick, but you can also fly indirectly from London Heathrow and London Stansted. Away from the capital, you'll also find indirect flights from Manchester, Birmingham, Edinburgh and more.

How long is the flight to Mauritius?

A direct flight from London to Mauritius takes just under 11 hours, but if you have a stopover your journey is likely to take at least 15 hours.

What to expect in Mauritius

Located in the Indian Ocean, Mauritius boasts aquamarine bays that give way to its iconic white, sandy beaches. These natural beauties have lured many a tourist to these shores over the years. But to really put those cheap flights to Mauritius to good use, venture just a bit further in, where you’ll find the Black River Gorges. This large country park is filled with thundering waterfalls, winding mountain trails and exotic wildlife, such as the pink pigeon and macaques. There’ll be no need for a filter on any of your pictures; Mauritius knows how to captivate an audience without any help. 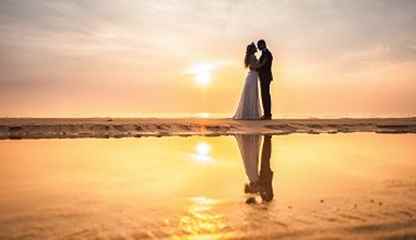 Packing tips for a destination wedding 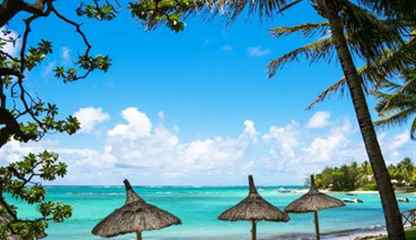 The hidden gems of the Mauritius coastline 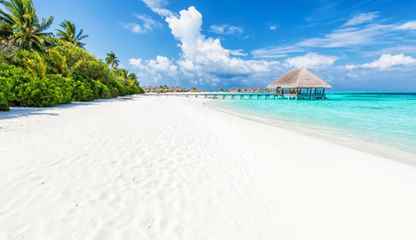