Come fly to Grenada with Netflights

Warm sunny beaches, clear turquoise waters, tropical jungles and green mountains all come together in the island of Grenada. Located in the Caribbean, this so-called ‘Spice Island’ knows how to add flavour to a tropical holiday with its minimal urban growth and natural scenery. Travelling here is easy and cheap when you book with Netflights. Search return flights to Grenada at any time and compare to find the best rates.

Key facts about Grenada be in the know

Most popular airports to fly into in Grenada

touchdown in a country nearby
Mexico
cheap flights to Cancun

How much is it to fly to Grenada?

Which airports fly to Grenada?

You can fly to Grenada from any of these UK airports.

It's best to book this far in advance if you want cheap flights to Grenada.

These airlines usually offer the cheapest flights to Grenada.

What airlines fly direct to Grenada?

These airlines fly straight to Grenada without stopping.

You can fly to Grenada with these airlines, but you'll have at least one layover.

Flights to Grenada are generally cheaper at this time of year. Or you could get a deal by booking your flight last minute.

This is the most popular time of year to visit Grenada, so flights are more expensive.

How long should I stay in Grenada?

On average, people spend this amount of time in Grenada.

How long is the flight to Grenada?

The shortest flight is from London Gatwick (LGW) to Grenada (GND) with British Airways, but other routes may take longer.

What you need to know before flying to Grenada

Grenada is by no means an expensive destination, which means you can do more on a budget. Cheap flights to Grenada will take you to the main Island and the city of St George. This capital city is filled with colourful hillside homes, colonial architecture and a boat-filled harbour all within the green jungle. Its picturesque view has earned its unofficial title as the ‘most beautiful harbour town in the Caribbean’.

Just outside of St George is the Molinere Underwater Sculpture Park, a popular snorkelling site which features underwater statues that have slowly become part of the underwater environment. Much like this site, the Grenadines have over 30 diving sites across the islands. On the island of Carriacou, the popular Bianca C Ship Wreck boasts the nickname ‘Titanic of the Caribbean’ for its large size. Flamingo bay in Grenada offers a more natural look at underwater life with its colourful corals and prolific sea creatures.

Beyond the marine and beach life remain the inner flora and fauna of the islands. Grand Etang National Park lets you see the exotic animals and climb to the top of the mountains for stunning views of the islands. You’ll find four of Grenada’s tallest peaks at this park, and the popular Seven Sisters Falls.

Grenada’s climate is tropical and humid with a yearly average temperature of 28 degrees Celsius. Its climate can be divided into two seasons: rainy and dry season. The rainy season takes place from June to December and is characterised by thunderstorms and downpours, especially in the inner mountainous regions. These events, however, are short and followed by plenty of sunshine.

It is good to note that the islands of Carriacou and Petite Martinique receive the least amount of rain because of their size and low mountains. June to November is also considered hurricane season, but because of Granada’s location, the islands are rarely affected. The island’s dry season occurs from January to May and experiences the north-eastern trade winds. These winds blow with moderation and grow with some intensity as the season progresses.

The best time to visit Grenada when it comes to costs and weather is May and June. These are the months before peak seasons when the weather is good, and airfare and hotel rates are low. September also sees low prices, although many places are closed during the low season. In the peak season of mid-December to April, most visitors arrive and prices rise. August is the liveliest time because of Carnival. To travel on a budget during the carnival season, book tickets well in advance.

Find great deals and low prices for Grenada flights using Netflights. Conduct your search by typing in your departing city and Grenada as your destination. Compare airline prices with the ‘best price by airline’ chart and choose ‘flexible dates’ for even lower rates. Apply filters to your search and view by departure and arrival times, airlines and number of stops.

Choose to fly with a number of well-reputed airlines to the Grenadines’ top destinations like St George, the Carriacou Island and Grand Anse Beach. Choose between American Airlines, British Airways, Iberia Airways and Virgin Atlantic Airlines and arrive at Maurice Bishop International Airport, just 4 miles from the capital St George.

All UK flights to Grenada are indirect and require at least one stop along the way. These stopovers take place in cities like Antigua, Barbados, St Lucia, Trinidad and Tobago and Miami. UK flights departing from other airports like Manchester Airport and Edinburgh Airport may stop over at Gatwick Airport in London. 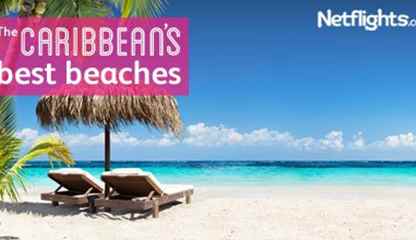 Beaches: Best to visit in the Caribbean 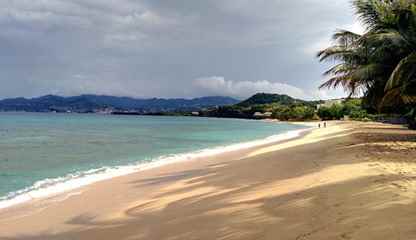