Come fly to Jordan with Netflights

A Jordanian adventure starts by letting Netflights help you find and compare hundreds of deals and offers, so that you can find the best flights at the best price. With your flights to Jordan, you’ll be beginning a journey of discovery that will lead you to incredible sights, both on land and underwater.

Key facts about Jordan be in the know

Most popular airports to fly into in Jordan

How much is it to fly to Jordan?

Which airports fly to Jordan?

You can fly to Jordan from any of these UK airports.

It's best to book this far in advance if you want cheap flights to Jordan.

These airlines usually offer the cheapest flights to Jordan.

What airlines fly direct to Jordan?

These airlines fly straight to Jordan without stopping.

You can fly to Jordan with these airlines, but you'll have at least one layover.

Flights to Jordan are generally cheaper at this time of year. Or you could get a deal by booking your flight last minute.

This is the most popular time of year to visit Jordan, so flights are more expensive.

How long should I stay in Jordan?

On average, people spend this amount of time in Jordan.

How long is the flight to Jordan?

The shortest flight is from London Heathrow (LHR) to Amman (AMM) with Royal Jordanian Airlines, but other routes may take longer.

What you need to know before flying to Jordan

A rock city and ancient history

To the south lies Petra. A city hewn entirely from the red sandstone of the surrounding mountains, this UNESCO World Heritage Site is not to be missed. It’s a prime example of ancient architecture. Some historians estimate that it was established as early as the fourth century BC. As you wind your way down the Siq, a narrow pathway shaped like a lightning bolt, the majestic façade of the Treasury peaks out from behind the rock, giving you your first taste of what’s to come. Explore the city’s tombs and monastery to discover what once was a bustling centre for ancient humans. A whole new side of Petra is revealed once the sun sets. Lit by 1500 candles, a night-time tour will let you see the rock city in a whole new light.

Finding cheap flights to Jordan means you can spend more time on what matters to you. For animal lovers and diving enthusiasts alike, this means diving in the Red Sea is a must. Jordan boasts unparalleled visibility thanks, in part, to its desert surrounding and high salinity. Dip beneath the waves and enter a world of breath-taking colour. Here, you’ll see shoals of colourful fish darting amongst rainbow-coloured corals. Common sights include eagle rays, stingrays and turtles. There is an abundance of dive sites, both real and artificial. Dive down to the Cedar Pride, an almost entirely preserved shipwreck that’s now home to an entire ecosystem. Even if deep diving doesn’t appeal, there are plenty of opportunities for snorkelling, an arguably more leisurely approach to marine exploration.

Summers in Jordan can be blistering hot and temperatures regularly soar above 40 degrees Celsius, particularly when the Sirocco wind blows. Despite this being the low season, airfares still increase over July and August.

The best deals tend to be found during spring and autumn when prices come down on either side of the summer months. If you’re working with a tight budget, then the best deals are normally found in March and September. Spring and autumn also bring more comfortable temperatures, usually in the mid-20s, that are ideal for sightseeing and many outdoor activities like hiking and diving.

For those who enjoy diving, September, October and early November are considered the best times to visit Jordan. Visibility is good, the water is a toasty 26 degrees Celsius and marine life is abundant. For hiking, get your flights to Jordan in April. Temperatures are comfortable, and this is prime time for wildflowers.

When using Netflights to find your Jordan flights, head to the ‘Worldwide Flights’ tab and use the calendar feature to search and compare the best deals for a whole month. You can also compare prices on flights departing from other United Kingdom (UK) airports. Additionally, you can then compare costs from different airlines on the results page.

Some direct flights do depart from London to Amman, the capital. Departing from other UK airports will require a transfer in Europe, Turkey or the Middle East. Direct return flights tend to cost more than indirect ones, so choosing a route with a transfer can help bring your trip in line with your budget.

Expect carriers flying to Jordan from the UK to include Turkish Airlines, Royal Jordanian Airways, Air France and British Airways. In order to find the best deals, book your plane tickets two to three months in advance of your proposed travel dates. 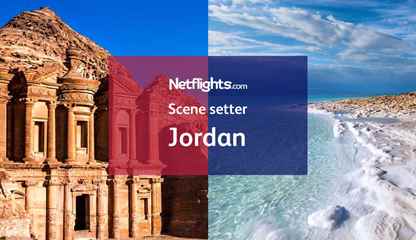